Wednesday! I'm looking forward to all the fantastic teases, aren't you? Vampire is the sixth Blue Moon House book and it's releasing September 4th. 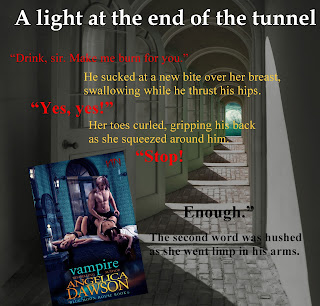 Would you like to read what lead up to that deadly moment?

He was still sitting there when a woman with long dark brown hair entered.
“Sophia sent me.” She came near, tipped her head to the side, and exposed her neck.
Nicholas shunned the offer as presented, drawing her into his lap instead. “And you are?” He nuzzled her ear and stroked her hip. She carried the tang of men and women. He smelled sex on her, and wanted it for himself.
Her voice softened to a rasp. “Cordelia. Please, sir.”
She said nothing more. His hands continued to explore as he asked, “Please, what?” He’d foolishly thought four nights of encounters would dull the urge.
Sophia’s words came back to him, advising what he should do, how to keep the demon from rising as his hunger did. He nipped the whore’s ear, making her jump.
Her blood was rich and thick. A few drops coated his tongue, but it was enough to awaken his thirst.
“Please, keep touching me,” Cordelia begged, her fingers opening his shirt. Nicholas continued to suck her lobe long after the wound closed. He tried to focus on not opening another, not biting into her neck.
She twisted, sliding her legs around his hips and rubbing herself on him. He opened his pants and lifted her skirt, needing the contact she sought. Once they had it, she pulled his head to her breast.
“Drink, sir. Make me burn for you.”
Hunger and thirst grew in tandem. He sucked at a new bite over her breast, swallowing while he thrust his hips.
“Yes, yes!” Her toes curled, gripping his back as she squeezed around him. He kept pushing into her, drinking until she shouted, “Stop! Enough!” The second word was hushed as she went limp in his arms.
He pulled his mouth away as another woman threw open the door. She rushed to his side with a speed only another vampire could possess. Her eyes sparkled like amber. This was Sophia’s companion, Lynn. She touched the girl in several places before lifting her off Nicholas. In the silence, they could both hear Cordelia’s steady heartbeat.
“She’ll be fine,” the vampire assured Nicholas.

Now... all those other teases!