The penultimate Blue Moon House prequel released yesterday! So to celebrate I'm sharing another excerpt from it. Pick up your copy now!

There were a few children in the house, and all the whores worked together to keep their lives as normal as possible. It wasn't ideal. Perhaps she should be relieved, but she wasn't. It felt like something she'd never had a chance to have was taken from her. She felt empty.
Gwendolyn thanked the midwife and paid her fee. Then she passed Sophia in the corridor, silently making her way to their room. Sophia followed, slowly. Gwendolyn was glad she didn't speak immediately. She needed a moment with her thoughts.
After watching Gwendolyn for longer than the girl could do in her place, Sophia asked, “Do you want to talk about it?”
“Not yet. I'll go up to the attic. I don't think I can work tonight.” She slipped her legs over the side of the bed and rose again.
Sophia reached for her as she approached, but Lyn shook her off. “Not yet.”
Sophia's eyes filled with tears, and Gwendolyn realized she hadn't cried yet. She wouldn’t any time soon. Sophia nodded and kept her hands at her sides while Lyn edged past. When Sophia closed the door behind her, Lyn heard her sobs through the thin wood. She wanted to comfort Sophia, and she would, but she needed time first. She needed to grieve this loss, and she hadn't managed to accept it yet. It would be days before she returned to herself, if Peter's passing was anything to judge by. 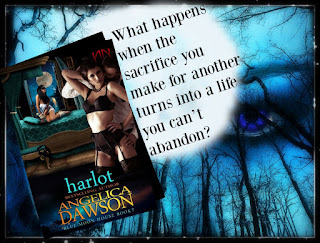 In the attic, Gwendolyn curled up, hugging her knees to her chest and rocking on the mattress. She could hear the commotion of custom downstairs and it was with that to muffle them that her tears started to fall.