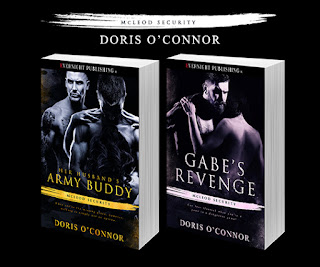 Gabriel Henshaw is nothing but a monster—a ruthless killer—that’s what Lissa Andrini has always been told. Sold to the man by her own father, she fears for her life, yet she can’t help the insane pull she feels to him. It has to be some form of Stockholm syndrome, surely? It couldn’t possibly be the effect of his Dominant nature effortlessly pulling her under his spell and awakening her latent submissive side.

Beating Andrini to a bloody pulp soothes Gabe’s rage temporarily, but that leaves his daughter. Were it not for a promise to her mother, he’d refuse this payment, not least because Lissa Andrini awakens all of his protective and carnal instincts. The perfect counterfoil for his darker needs and desires, she has the power to bring him to his knees.

Don't miss the second in Doris O'Connor's McLeod Security series. It stands alone, but readers might find some familiar characters from the first installment.

Grab it at Evernight, Amazon, Nook, Kobo, Smashwords, or I-Books. 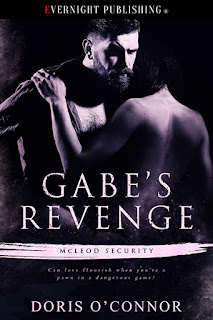 #MidWeekTease A Pair of Eyes

Welcome to #MidWeekTease, the place and time I and other authors offer up a taste of one of our published works or works in progress. This week, I'm sharing from a work on hold. This MS has been sitting in my "trash" folder waiting for something to resurrect it. I may have found that. We'll see. For now, let me know what you think.

Ben clapped my shoulder. “Dude! You have a date with a pair of eyes. How trippy is that? Bet she doesn’t eat or drink anything.”
She didn’t, of course. She couldn’t lower the veil in public, but she did order me a coffee that could double as a wood stain. She also introduced herself and her friends.
“I am Dina. Fathima, my mother. Leila, my aunt.” She gestured to each.
“I’m Dustin,” I reminded her. I fiddled with my ball cap, making my light brown hair even messier. I pulled the brim lower and focused on Dina again.
“Your English is very good.”
“I had a tutor,” she explained. “Mother wanted me educated, and Father loves Mother.” She grinned at Fathima. The only part of the grin I could see was the crinkling of her eyes and a lifting of her veil with her cheeks, but I knew what it was.
“Dina,” I said, stretching my hand across the small table. I nearly jumped out of my skin when she put her hand in mine.
Fascinated, I ran my fingers over the back of her hand, the darker creases in the light brown skin. Then I turned it over and traced the lines of her palm.
Her aunt said something in Farsi that made Fathima laugh but Dina only twitched her fingers.
“What do I do next?” I asked. “How do we...?” I closed my hand around hers and pulled it toward me. I kissed the back of her hand before letting it go.
“You approach my father, ask for my hand.”

“Married?” I asked, shocked. “But you don’t even know me.”
“I watch,” she said. “You are a good man, fair.” Leila said something else and Dina nodded. “I won’t know my husband so well. Father will choose.”
My stomach twisted at that thought.
“Meet me again? Once or twice more? We don’t marry so quickly in America.”
Dina nodded. She toyed with a napkin while we chatted in somewhat broken English. She told me about her brother, her younger sister, both were home with her grandmother. I told her about my sister and niece back in Idaho. I hoped she would start instructing me on how to approach her father.
“When to meet next?” she asked. “Father is difficult. It will take time.”
I nodded. “I’m off again in three days.”
Dina moved my cup, sliding the napkin beneath it. Then she excused herself and left with her aunt and mother. I was pulling out money to pay when I noticed a black mark on the paper napkin. Lifting the cup, I saw writing. Trying not to draw attention, I balled it in my fist, dropped the money on the table and pushed the note into my pocket.
“You do this right,” the man said as he cleaned away the cash. “That right way.” He shook his finger in the direction of Dina.
I smiled and nodded. With luck, I wouldn’t make any major mistakes. I’d seen what the men here did to their women. Made me want to kill most of them. Dina’s father didn’t seem to fit that mold, based on what I’d seen. She was free to come and go and never showed any sign of abuse.
I didn’t pull the napkin out again until I was safely in the compound. Dina had been so careful to conceal it, that I didn’t want anyone knowing about it.

I meet you at hopsital tomorrow after dark.
The words blurred as my hand shook. She wanted to meet me, secretly.

Worth pursuing? I really need someone to help me with the research. If you are muslim, or close to a muslim that might be able to help, please let me know!

Here are the other authors participating this week.
Posted by Angelica Dawson at 00:00 1 comment:

A retelling of Swan Lake, Love is truly for the birds when  Anna and Odette are shifted into feathered friends.

From Coming in Hot, Destiny is Dr. Edgerton's admin assistant by day, but she will dominate him at night!

This sale won't last long,
so grab them now!

Posted by Angelica Dawson at 00:00 No comments:

Hello! I know, I've been gone a while, and I might disappear again for a few weeks over the summer, but I'll try not to let things go so long. Just before my hiatus, I had released the eighth and final book (or first book?) in the Blue Moon House series. The Beginning is the story of Sophia, matriarch of Blue Moon House. Here is an excerpt from her humble beginning. It is available on Kindle, Kobo, Nook and Ibooks.

“I’m going to ruin it.” Louise brushed at a smudge of soot from where she had bent to tend the fire.
“Only if you keep doing the work that should be mine.” Sophia let her fingers brush Louise’s skin around the collar of her chemise and along her leg as she rolled down her stockings.
“It just seems odd, to be doing so little with my day. How do other ladies do it?” She picked at a loose thread on her sleeve.
“You need to use your skills in a new way. Stitching becomes embroidery, gardening becomes flower arrangement, and cooking becomes pastry design. You will find your way.”
Louise shook her head. “Never. I’m not like Nicole or Claudette. I can’t be as dainty as they are.”
She sat on the bed beside her new friend. “You are just as dainty as they are, and more lovely besides.” 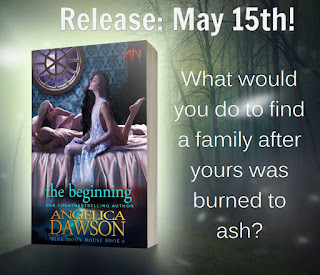 Pink rose in Louise’s cheeks, unaccustomed to compliments. “No.”
Sophia took hold of her chin and turned her. “You are lovelier to me.” Then she took the plunge. Leaning forward, close enough for their breasts to touch. She held there, expecting Louise to retreat.
Instead Louise smiled and covered Sophia’s hand with her own. “I’m so glad you came, glad you stayed. If only we could pay you properly.”
“There is something I desire that you could provide.” She lunged in, kissing the other woman.
Louise pulled back, brows raised. “Really? That’s what you want?” She closed her eyes and sighed. “I can do that.”
Sophia’s jaw dropped. She hadn’t dreamed it would be so easy to coax her. Sealing her lips to Louise’s, she drank in the human scent, longing for blood as well. Resisting those instincts, she went slowly, trailing her fingers over breast and hip.
“Lie down.”
Louise’s eyes widened and she froze in place.
“Trust me.” Sophia knelt to gather up the other woman’s chemise, inching it toward her head.
When Louise still didn’t move, Sophia returned to her knees, kissing one leg and then the other.
“Oh, oh, God.” Louise’s fingers gripped Sophia’s hair. The vampire paused but was neither pushed away nor pulled closer. After a moment, Sophia continued toward her goal, just visible behind the curly hair framing it.

As every week, there are many great authors participating. Check all of them out!
Posted by Angelica Dawson at 00:00 2 comments: