Passion, Pleasure, Pain: An anthology of Dominance and submission 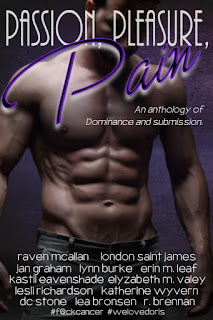 In each other they found the piece of themselves they hadn't even realized was missing.

This D/s anthology was put together by writers who hold author, Doris O'Connor, near and dear to their hearts because the genre is one that was near and dear to Doris as an author. #F*ckCancer #WeLoveDoris 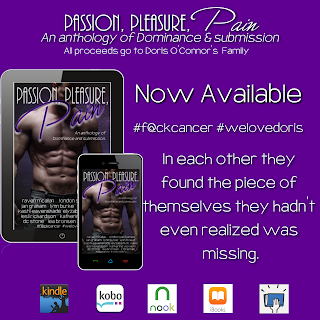 You Belong to Me by Lynn Burke
Alabaster by Kastil Eavenshade
Risqué by London Saint James
Back on Top – A Wylde Shore Novella by Jan Graham
Hell’s Mercy by Katherine Wyvern
Deb by Name, Sub by Nature by Raven McAllan
Once Upon a Time by Erin M. Leaf
Shade Addiction by Lea Bronsen
Yes, Governor by Lesli Richardson
Entwined by Elyzabeth M. Valey
Burn by DC Stone
Claimed by the Stranger by R. Brennan


You Belong to Me by Lynn Burke

My entire life is one bold-faced, fucking lie. Son of Victor Laurent and sole heir to the entire Laurent fortune built up from a few great grandfathers back in the Civil War times, I’ve been raised—groomed—to be the perfect Southern gentleman. Proper and full of self-control, a man who can keep hold on the vices that help me live my daily life of pure, fucking drudgery.
I know what it means to be controlling not just of myself but of the woman who will one day kneel at my feet. The one who belongs to me, however, is promised to another—and claiming what is mine could cost me everything.
Author Bio:
Lynn Burke is a full time mother, voracious gardener, and scribbler of spicy romance stories. A country bumpkin turned Bay Stater, she enjoys her chowdah and Dunkin Donuts when not trying to escape the reality of city life.
Author Links:

Alixandre Chastain enjoys the darker side of Paris. A Libertine by trade, no flesh is barred from his roaming hands, no matter what lay betwixt their legs. Except when news of his lustful ways reaches his God-fearing parents, they strip him of title and cast him out. Alixandre’s now adrift and with an uncertain future, but an interesting proposition by Comte Phelipe Richelien promises to replace everything he lost with a new world of decadent pleasure like no other. But can Alixandre submit to his new Master? And will his guarded heart be laid bare by one spoken word—Alabaster.
Author Bio:

Kastil Eavenshade is multi-published author pandering her romantic shenanigans. When not catering to the whims of three rescued kitties, she’s dreaming up her next heart-beating tale. No period in history–past, present, or future–is safe from the clutches of her muse.

Her passions beyond writing are drawing, cooking, and watching Pittsburgh Penguins hockey. She credits her parents for her free spirit as they’ve always supported her in every aspect of her life. Without them, she wouldn’t be here. She finds pleasure in writing anything from fantasy to romance-which sometimes parallel each other.
Author Links:

Alex
Camilla Maria Campanelli. I’d caught glimpses of the woman when she popped into my Manhattan gallery—there to collect a commission for the paintings we sold for her. So let’s just say I never expected the wet-dream version of Camilla to sashay into Indigo House, an exclusive member’s only club that catered to very specific clientele with extremely particular desires.
Camilla
The night I stepped out on my balcony, I hadn’t intended to be a voyeur though I ended up being one. And what shocked me even more than my uncharacteristic behavior? I’d actually been aroused watching two strangers get their kink on. But I wasn’t into D/s. I’d never even read those Fifty Shades books all my sisters went on and on about.
So why was I affected?
I needed some real, solid answers. And there was only one way to do that.
Author Bio:

London Saint James has lived in many places but never felt “at home” until she met the real-life man of her dreams and settled down in the beautiful Smoky Mountains of Tennessee. London lives with her husband and their fat cat who thinks he owns them.
As an award-winning, international bestselling author, London is living her childhood dream. She knew all the scribbling she did, that big imagination of hers, and all those clamoring characters running around in her head would pay off someday.
Author Links:


Back on Top – A Wylde Shore Novella by Jan Graham

Wealthy, charismatic, influential and damn near immortal, Lukan Løvensgård looks like natural Dom material, and in fact he has never, but never submitted to anyone in his long life. But among all the bizarre and fantastic people roaming the far planet of Cydonia, there is one who stole his old, cold heart.

Her love comes at a price. Complete surrender.

With her impressive presence and unusual equipment, Helenay is the hottest and trendiest professional Domme in Neu Venedig and she hardly has the time to top for pleasure these days.  But she knows what her old friend Lukan needs, something he never suspected. Release from power.

I have entered that age when looking at beautiful male models in their prime probably makes me a cougar, ahem.

Almost all my heroines are short: that’s because I look at the world from hobbit level. Being so small I am three times more concentrated (read: obsessive) than anybody I know. I am exhaustingly creative in writing, arts, crafts... Sometimes my brain gets friction burns from hurtling at such speed from one universe to the next.

I love animals, plants, and occasionally even people.

Like Highlander I come from a lot of different places. I was born in Italy but lived here and there and consider myself simply and deeply European. I love Europe passionately, its antiquity, its diversity, its quirkiness. All my books are set in Europe, or alternate versions of it.

I have been writing since I can remember.
Author Links:


Deb by Name, Sub by Nature by Raven McAllan

He can command his men…
But can he command Deborah?
Major Oliver Cantor, newly back from the continent, has always wanted Deborah. However she is an innocent. A lady who has no idea just what Oliver wants, needs and desired.
Or does she?
She knows he is dominant and wants someone to be his submissive.
She also knows it should be her.
Now all she has to do is persuade him of that fact.
You’d think it would be easy, but…

Raven lives in Scotland, along with her husband and their two cats—their children having flown the nest—surrounded by beautiful scenery, which inspires a lot of the settings in her books.

She is used to sharing her life with the occasional deer, red squirrel, and lost tourist, to say nothing of the scourge of Scotland—the midge.

Her very understanding, and long-suffering DH, is used to his questions unanswered, the dust bunnies greeting him as he walks through the door, and rescuing burned offerings from the Aga. (And passing her a glass of wine as she types furiously.)


Once Upon a Time by Erin M. Leaf

Charlie has never been in love because he’s never believed in happily ever after. He prides himself on being a good friend and a good Dom, and that’s always been enough for him, except lately nothing feels right. He doesn’t know if he’s having a mid-life crisis or what, but his best friend suddenly looks hot as hell, and nothing about that is normal.

Ryan’s straight friend Charlie has always had his back: when he came out, when he got married, and when his husband died. He’d do anything for the guy he’s been secretly in love with forever. So when Charlie suddenly proposes a spanking scene under the guise of “relaxing” him, he almost runs the opposite direction. Except, what if this is his one chance to finally show Charlie what real love feels like?

Ex-boxer Mike Logan struggles to put a brutal past behind and make ends meet as a bus driver. When a young runaway settles for an all-night ride, he seizes the chance to do a good deed—get her home safely. But first, they’ll drive around and talk.

As chief of staff to the governor of Florida, Carter has a well-deserved rep as a bastard extraordinaire. But when he’s dealing with two governors for the price of one on Christmas Eve, will the Master find himself outmatched and outmaneuvered by his wily political pets?

Note: This standalone short story takes place after Chief (Governor Trilogy 3) and can be read as a standalone independent from the trilogy.
Author Bio:

Author Lesli Richardson, who is better-known by her more prolific wild-child Tymber Dalton pen name, lives in the Tampa Bay region of Florida with her husband (aka “The World’s Best Husband™”) and too many pets. She writes a wide variety of heat levels and genres, from mainstream sci-fi all the way to scorching ménage.

The two-time EPIC award winner and part-time Viking shield-maiden in training loves to shoot skeet and play D&D with her friends. She’s also the bestselling author of over one hundred and fifty books and counting, including The Reluctant Dom, the Governor Trilogy, the Suncoast Society series, the Love Slave for Two series, the Triple Trouble series, and many others.

She lives in her own little world, but it’s okay—they all know her there.

But Master Murphy has other plans. He enters her life full-steam and won't take no for an answer. While she's compelled to say yes, is she really ready to say goodbye to her world as she knows it to become permanently entwined with His?
Author Bio:

Ely Valey is a writer of sizzling, sexy romance who firmly believes in happy ever after. From paranormal to contemporary, fantasy, or historical, she enjoys exploring her characters' darker side and writing stories about tortured heroes, strong heroines, and all that comes between them and their love.

When she's not writing, she can be found walking in the Spanish countryside with her black Lab and Golden Retriever mix, exploring castles, or enjoying some tapas with her friends and family.
Author Links:

Cain Silvers is the Captain of one of the nation’s best Hotshot fire fighter groups there is, and his world has turned upside-down when his best friend’s kid sister, Chloe Crowley joins the team. Chloe has always made him uneasy with her attraction to him, something he refused to act on because of who she was and how innocent she is.

Chloe wants to make a difference in the world, and following her passion to become one of the few females in an all-male industry is just the start. She’s set on proving herself to her team, but still follows her own rules, ones that could get her into a lot of trouble.

Passion collides with desire in their story, leading up to actions that could burn everybody.
Author Bio:

DC Stone has over sixteen years of investigative experience, including working as a criminal investigator in the United States military. She currently works as an internal affairs investigation manager by day and a romantic suspense author by night. She has her Master’s degree in Criminal Justice and is dubbed, “The Investigative Whisper.” She provides numerous workshops that help authors gain insight into “digging” into a character’s mind to better understand motives, create suspense, and help maintain conflict.

When she isn’t trying to solve a new puzzle in the world of fraud, she is engulfed with coffee, her laptop, and all those crazy characters in her head. She is a member of the Romance Writers of America, New Jersey Romance Writers, RomVets, RWA Kiss of Death, and the Liberty State Fiction Writers. She served as the 2014 Vice President and Conference Chair for NJRW. Find her at the following stops: Facebook PAGE, Facebook PROFILE, Twitter, and her Website.
Author Links: 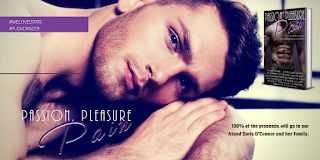