Alpha Shifter Seductions, a paranormal box set of sexy original stories, is available now for only $0.99! I have the pleasure of sharing a tease from Ngyong's Tiger by Melissa Bell.

Together they weaved through the people, the wave of bodies parting to allow them through unhindered. She spoke of her studies in Australia, her work at the zoo and dreams of working with animals all over the world. Kitsune even found herself telling him she wanted to open her own sanctuary here in Japan, filled with animals not commonly found in zoos, with the goal of conversation and educating people about animals they otherwise wouldn’t know of. She chatted, with no interruptions, of her plans to housing the animals in large, open enclosures, similar to their own habitats, allowing people to travel through in small, guided buses.

Silence fell between them, comfortable and relaxed. Kitsune steered them to a large Japanese Maple tree. She smiled as he frowned, and when he turned to her, she simply winked and began the short climb to a secret platform. Once they were both up and settled on cushions she’d placed earlier in the day, she explained.
“My father had this built for me when I was about ten years old. He placed it here, low enough for an easy climb yet high enough to have the best view of the harbor, and very few people know of its existence. Even with me living abroad for study, my father keeps the tree maintained, leaving a natural window in the branches. People walk by every day, and they don’t realize they are passing the best vantage point along the bay.”
She opened her bag, grateful that she’d packed extra food and drink on a hunch, and pulled out two coconut waters. Karasu took one and settled on the cushions beside her, and Kitsune couldn’t help but notice how close he was.
“It is a nice view. Your father must be pretty cool.”
She shrugged. “He can be.”
With a laugh that had her stomach flip, he finished what she’d left unsaid. “But he can also be a tyrant, right? Mine is the same. I can never tell which Dad has come home from the office, Mister Cool or Mister I’ll-Kick-Your-Ass.”
Kitsune snorted, spraying coconut water over the platform. She burst out laughing once she choked back what water she hadn’t spat. They spent a few minutes sharing tales of their fathers while they sipped on their drinks and snacked on green tea chocolate dipped biscuit sticks.
The evening sky had deepened to a royal blue, while the horizon was tinged a thin line of soft yellows and pinks. The low rumbling that had been people along the harbor talking about moving to a good position now ceased, and an eerie silence fell upon the dockside. Kitsune and Karasu followed cue and drew quiet as well. Kitsune pulled her knees up to her chest and stared out across the water, momentarily forgetting she wasn’t alone as anticipation grew and her vision narrowed to where the fireworks would come from.
The first squealing scream smashed through the silence, and she jumped, her heart pounding as she grinned.
“Ha!”
Karasu’s voice next to her ear startled her anew, and she glanced at him, light from the fireworks casting a dance of colors across the planes of his face. She really looked at him for the first time. His bright eyes reflected the glowing sparks that erupted over the bay. A long, slender nose seemed to point down to plump lips that were never far from a smile or a grin. Black hair cut in a jagged, fashionable style waved softly around his face, contrasting against his light skin and sky blue eyes. He was an anomaly. It was uncommon for any Japanese person to have eyes colored anything but brown, and the cerulean shades captured her. 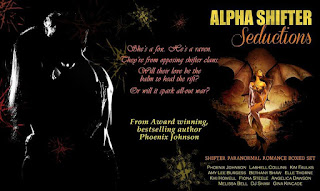 “Do I have a zit on my nose or something?”
She must have been staring at him for a while, lost in studying his appearance. When he spoke, still watching the fireworks, she blushed profusely yet subtly shifted closer. The warmth of his body was welcome as the night air took on a chill. Kitsune had left a blanket on the platform when she’d brought the cushions, but it was a different kind of heat she sought.
“I’m sorry, I didn’t mean to stare. I just…” She paused, almost losing confidence. This wasn’t like her at all. She was reserved, and hadn’t been really interested in any sort of relationship with a man, outside of professional, since she’d broken up with her high school boyfriend when she’d left for Australia. While she worked and studied with some attractive men, she never had much interest in a social life, let alone a sex life. Karasu’s presence, however, had awakened her sexual desires, and she didn’t want to deny her attraction.
Karasu finally turned to face her, and Kitsune threw caution to the wind. She leaned in and kissed his lips, pleased by how soft they were as he responded. His mouth was warm, and their tongues danced, the sensation sweeping her away in a wave of giddiness and tingles. Pulsating heat gathered between her legs, and she moaned as he cupped her cheek in his hand, stroking her skin with his thumb. They shifted closer to each other, pressing against one another. She was drowning in pleasure, her breasts brushing his chest as they breathed. Kitsune could still hear the popping as the fireworks festival continued, the gathered crowd oblivious to her increasing desire for this man to take her right here, right now.
He broke the kiss, panting, and the world snapped back into place around her. “Whoa.” As she looked into his eyes, she noticed they’d changed to a darker shade of cobalt. “Well that was intense.”
Embarrassment gripped her, and cold shame washed through her. She leaned back. “I-I’m sorry.”
“Don’t be. It was good.” He chuckled. “That would be an understatement, actually. It was… hot.” Karasu’s voice was deeper, husky, and her arousal returned as he growled the last word. “I want to know your intentions, though.”
She paused in thought. Kitsune wasn’t a woman who acted rashly. “I am not entirely sure, to be honest. I just wanted to kiss you.”
Karasu grinned, and she was glad to be sitting. She was fairly sure her knees would have given out if she’d been standing. “Well I’m not going to complain.” He dropped his grin. “But I’m not a one night stand kind of guy. Nor am I a kiss and run guy, either.”
“Me neither. I mean-” she rushed, but his laugh silenced her.
“That’s good know, lovely fox.”
They fell silent again, this time a little awkward. Kitsune fiddled with the seam of her jeans. “You know, we could always just… see how things go.” She dared to look at Karasu, her heart pounding.
A single eyebrow rose, and one side of his mouth rose into a smirk. “So, do you maybe mean some more kissing, and take it slow? Or –“
“Jump in and see if we can sink or swim.” Her own bold answer surprised her, and she rushed to apologize. “I don’t know what’s come over me.”

He moved closer to her again, leaning on one arm as he returned his other hand to her cheek. Karasu stared into her eyes. “I don’t mind at all when a woman knows what she wants and isn’t afraid to go for it.”
“Well then,” she paused to lick her lips, “I hope you are ready to get wet. I mean… Oh screw it.” Kitsune kissed him, thrilled when he responded with passion. They remained in each other’s arm, enjoying the embrace. She wasn’t sure how long they had been kissing, but she was still feeling bold and took a chance. Kitsune reached to his shirt and began to unbutton it, exposing his lithe, lightly toned body. She ran her hands over his muscles, his resulting moan setting her hair on end. She felt his fingers fiddle with the buttons on her blouse, and soon the cool evening air was caressing her skin, sending chills through her body and only serving to increase her arousal. Pulling away, Kitsune shrugged out of her open shirt as Karasu removed his, neither breaking eye contact. She took control and pushed him on to his back, kneeling over one of his legs and leaned over him to kiss her way from his mouth to nibble on his earlobe, then moved down his neck. His breathing grew raspy and she smiled as she playfully nipped at his collar bone. Karasu breathed out in a hiss.
“You weren’t kidding when you said about jumping in.”
The huskiness of his voice made her quiver with excitement.
Posted by Angelica Dawson at 00:00