Hopefully soon I can start sharing something new I'm working on, but currently, it's still all in my notebook and needs to be transcribed. In the meantime, I have another snip from Ethereal Guardian. This does follow the previous, which was a dream/flashback.

Ember woke with a start. Her heart pounded in her ears and she clutched her chest. If Summer hadn’t described her memories as Mary Parker, she might think she was crazy. Instead, she wondered who Anne, her ancestor, was.

Climbing out of bed, she pulled on a robe and descended to get a glass of water from the kitchen. She paused on her return, watching Geoffrey pace the spot where they’d worked the spell on Duncan. The ghost seemed very solid, only a hint of an aura gave him an unnatural cast.

“What are you doing?” she asked.

“The floor feels different here. Like I might fall through it. You know, I don’t understand why I don’t fall through floors the way I go through doors and walls.”

Ember shook her head. “Best not to think about it. I know it feels hot to me, like it’s been in the sun for hours. Geoffrey, did you know a girl named Anne and her brother, Thom?”

The ghost cocked his head to the side then shook it. “No, I don’t think so.”

She shook her head, sipping water from the glass. “No. I think it was the beginning of the witch trials.” 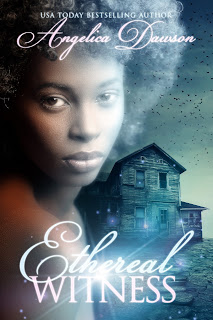 Geoffrey shuddered, wrapping his arms around himself, as though he were cold. “That was a bad time. I was young when it first started, but it grew, even after they…after Mary, they did horrible things to other women. Of course, after Mary, I didn’t pay it much mind.” He turned away, looking to his feet.

“I understand. Thank you, Geoffrey.”

“Do you sleep?” she wondered aloud.

He chuckled. “Sort of. I rest after you’ve all left. I like to be active when you’re here. Feel less like a lurker that way.”

Ember nodded. “I’m glad too. It would be much worse if you just popped in and out of existence.”

“Exactly. Sleep well, Ember. I’m sure your dreams or memories will guide you, just as Mary’s, Summer’s did.”

Be sure to visit all the other blogs participating this week.