I don't have a "favorite" mythical creature. There are, however, those I am interested in, one being the Skinwalkers of Native American lore. For some reason people think that Skinwalkers belong only to Navajo folklore, however that is not true. Most have some version of the Skinwalker, including my own ancestors. Navajo are just the ones who get all the press.

The consensus is that Skinwalkers are evil shamans (or witches) capable of changing their shape to that of various animals. Depending on the tale being stretched around a campfire, they can change shape at will, change shape only to those animals they have killed and eaten or are those who can don the skin of other creatures and take on their characteristics. The latter are of particular interest to me as villains. The ability to kill and impersonate another human is far more frightening to me than appearing as a wolf or bear. Disinformation and betrayal is what destroyed much of Native American culture to begin with, and impersonating a friend or loved one is the easiest way to betray someone.
I find the idea of magical transformation to be fascinating, and many of my villains are capable of such a feat, often in the most gruesome way possible. Many of my most memorable villains eat human hearts, skin their victims alive or pluck out their eyes and devour their souls. Think about that the next time someone you care about seems to be being weird and tell me it doesn't give you the creeps. 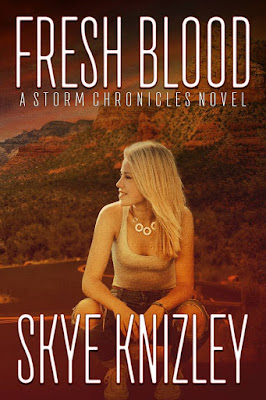 Teenage girls are going missing in the St Louis area only to reappear sliced into bloody, unrecognizable ribbons dropped along a lonely stretch of highway, leaving parents in a state of panic and the police baffled. Twin monster hunters, Jynx and Piper Kane, take the terrifying case, digging in where angels fear to tread in hopes of finding a link to the lycan clan that turned their brother and destroyed their family.

As clue after gory clue leads deeper into the darkness that lies just beyond the glow of the city Jynx and Piper find themselves facing a terror like nothing they've hunted before. Something with no fear and no remorse.

It's out there in the dark... and it's looking for Fresh Blood.
Find more from Skye Knizley here!