The fifth Blue Moon House book is less than a week away! I hope you enjoy this tease from it and consider preordering from Amazon, All Romance Ebooks, or Smashwords. 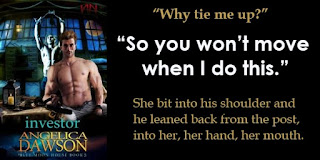 Terrance grasped Nicholas and his words cut off. Running his fingers over Nick was similar to how he held himself, but so much more sensual. His skin was so soft over the rigid shape. When he pulled his fingers up, he was met with a bead of fluid, allowing his hand to move more freely. Nicholas must have found the same because Terrance thought he was burning with the slippery strokes he received.
“I need you,” Nicholas said, cupping Terrance's ass and pulling him closer again. Both cocks were pinned between them. “Tell me I can have you.”

Terrance kissed him, letting the action speak louder than words. Nicholas gripped his ass again, massaging it, sliding his fingers over the skin. They waddled to one of the framing posts and Terrance took hold of it, his pants around his ankles. Nicholas waited only a few moments before rubbing the head of his cock against Terrance, working him open slowly.
Kisses showered down on Terrance's back, though his jacket and shirt. Nicholas' hands drifted up, under the shirt, pulling him back onto Nick's cock. It was much more difficult this time. Terrance gritted his teeth and cried out as Nicholas seemed to tear him open. The hiss of pain turned quickly to a moan of pleasure as he was filled, stretched to breaking.
“Hold still, Love. I don't want to make it worse. Fuck you feel so good around me. Can you feel how close I am, how much I want to come inside you?” He murmured while his hands flowed over Terrance's skin, one stroking his cock again.
“Yes,” Terrance panted. “I want to come with you. I want to be part of you.”
“You are all of me,” Nicholas said. “You are every bit of me and all of you. Together, we are amazing.”
“Amazing,” Terrance murmured. He shifted on Nicholas and the tear burned, but inside he ached. The need outweighed the small pain easily and he rocked on Nick's cock, beginning to throb.
Be sure you pop around to all the other teases. You won't be disappointed!