For your reading pleasure, we'll be featuring each author with a story of her choice for the next few weeks. Some will include interviews, and all will include excerpts. Today's featured author is Amanda Pillar. 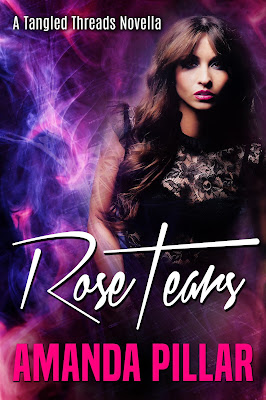 Death is coming for Lori Hardcastle.

Half-Succubus, half-Sídhe, Lori has been on the run since she was seventeen. Worried that her vengeful family will find her, she’s been hiding in the Borderlands, a magical plane nestled between the fae and human worlds. However, when her path crosses that of a dangerously sexy fullblooded fae, will she be able to survive the encounter?
Conrad Death is a cleaner (he doesn’t like the term ‘assassin’) for the fae White Queen. His latest mission: find the half-breed daughter of the Count of Tears. Easy. Except no one knows what she looks like, her real age, or even what name she uses. However, Conrad isn’t daunted by simple details – he’s finished every job he’s ever started. But when he meets a smoking hot Succubus in a Borderlands bar, his life is thrown into turmoil.

Conrad Death didn’t really like the term ‘assassin’.
He much preferred the human word ‘cleaner’. After all, that’s what he’d spent most of his adult life doing: cleaning up other people’s messes. Namely, the messes left over after people had pissed off the White Queen, Gwyndolen Dubois.
His liege.
More like his slave mistress.
But that was just semantics, or so the court chamberlain liked to tell him.
The White Queen solved her problems with clandestine murder. The Black and Red Queens were also renowned for their capricious natures, but were a little more…blunt about it. Because of that, they tended to nurture their reputations as complete and utter hard-asses, at least, that’s what Conrad figured. The human media loved it: the intrigue alone kept several of their magazines in business.
‘Night Court: Deadly After Dark’.
‘Day Court: Suns of Anarchy’.
He’d read those two headlines in just the last week.
The White Queen, however, liked to have a positive and – ugh – chirpy public image, all the while tidying up her court when the mood struck her. And it seemed to have been striking her a lot more frequently of late.
Conrad was currently kicking his heels in an antechamber to the chamberlain’s office. The waiting room was full of priceless artifacts, gold-filigree hangings and the occasional rare human antiquity, mostly of the Egyptian kind. And all about cats. The chamberlain had a thing for them. Put the whole ‘crazy cat lady’ thing into a new sphere.
“Death, there you are.”
“Lady Whisky.”
She hated the nickname he’d given her – it was really Countess Whiskertine – but he couldn’t be bothered with the formalities, and she had to tolerate him.
The chamberlain stood in the doorway to her office, hair tied up in an elaborate bun. Her slit-pupilled stare bored through him, but he didn’t so much as blink. Staring contests with Cait Sídhe were important to win.
Eventually, she blinked and waved a hand at him. Following her into the office, he took a seat without invitation. The room was spacious, and was probably the size of an entire human apartment. It had a wall of books on the north side, and then a wall of glass on the south. In the very middle – he’d bet money on its exactness – was a large mahogany desk, with two red leather chairs in front. Incongruously, to the far left, there was a cat scratcher and plush rug made of sheep hide.
Conrad didn’t want to picture the chamberlain kicking back in her cat form, playing with mice. Come to think of it, he’d never seen a rodent within a hundred yards of this area. Gross. He did a lot of disgusting stuff, but eating rats was beyond even him.