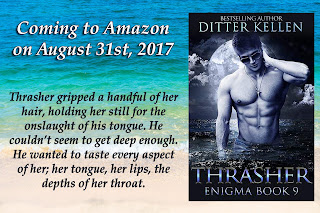 Ex-CIA agent Melvin Escabar has sworn to live and die by his honor. Love is a weakness, nothing more. Now he spends his time in the underwater fortress of Aukrabah, working to protect the Bracadytes from the land walkers who will stop at nothing to destroy them. Dubbed “Thrasher" by the Bracadytes, Melvin becomes a blood brother to the giant warriors and would gladly die fighting alongside them. He has no time for love, nor does he want the inconvenient emotion. Until the beautiful Arkadian warrior, Kaspyn, is thrust into his life. Kaspyn is fierce, gorgeous, deliciously deadly… Her very presence threatens to thaw Melvin's icy heart.

As the daughter of a king, the Arkadian princess Kaspyn must adhere to certain rules laid out by her father: never show weakness, die with dignity, and know your enemies. Though the Bracadytes aren’t Kaspyn’s enemies, the humans they consort with are another story altogether. Especially the cocksure Thrasher. His sheer arrogance and dominant ways are enough to set her teeth on edge. Not to mention the human blood that pumps through his veins. No, Kaspyn has no use for the land walker, Melvin Escabar, other than a place to store her blade. But something about him draws her in, disarms her…until he haunts her dreams and every waking thought. All Kaspyn knows is she has to get Melvin Escabar out of her system—or risk losing her heart forever.