For your reading pleasure, we'll be featuring each author with a story of her choice for the next few weeks. Some will include interviews, and all will include excerpts. Today's featured author is Savannah Verte. 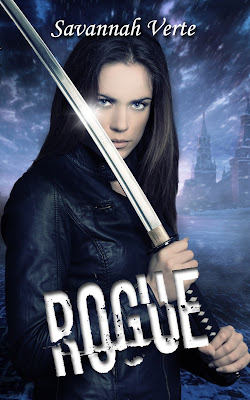 Who do you trust when you learn those you trusted lied to you?

Everyday immortal Bree Brigand gets a rude awakening as her family is slaughtered. Not only is the cursed, suicide blade of legend and lore real, but it has chosen her. She must quickly learn to fast-track a course she’s never navigated, in a world she thought only existed in campfire stories. But, only after coming to terms with the facts…her family is not her family.

Truths and lies collide in a world where the hunters and the hunted trade places faster than she can discern who is which, and everyone is an assassin. Can she find and claim her destiny? Or, will being marked by a male who is not her one true mate ruin everything, and clip this dragon’s wings before she can become all she is meant to be?

I was shaking with rage, but dropped my voice to a whisper. “What do you mean, these are the assassins? What am I then, a spring lamb for the slaughter? Why would you bring me here?”
The next sound that came from her lips was something between a cackle of laughter, a sigh of exhaustion, and an odd bark. “Because Asa, in this world, everyone is an assassin. The difference between them, is which side they are on, who they work for, and if the price or prize is worth the risk. Right now, you are not a prize here. The safest place for you to be, is in plain sight, able to identify others. Out there,” her head jerked backward over her shoulder, “you’re the unknown, you’re the rogue, and you’re the potential pawn in a game you don’t know that you’re playing. Now that you’ve tripped into this world, and all but announced your presence, the only option to keep you safe, is to expose your throat while looking them in the eye, which simultaneously exposes theirs.” She reasoned.
“That’s insane.” I hissed.
“That’s the world you were born to. Your parents knew it. What they didn’t know, was when they became the target. I choose to think that if they had known, or had even the slightest indication, you would not have been conceived. But, they are gone, and here you are. I thought I had succeeded in keeping you from this world. I was wrong.”
“So you are saying that my parents were assassins too?”
“Hear me clearly. You come from a long line of assassins. Your world now is filled with them. Trust no one. You will be safe until the time you are not. Do you still think it was so wise to come here?” She challenged with her hand on her hip.
I was dumbfounded. Why in the world would my mother have told me to remember and find this? Surely she must have known. It made no sense. “Did they know?”
“Who?”
“The Brigands?”