Welcome to the MidWeekTease. This weekend, March 23 & 24, you can get
Sin & Seduction

So, I thought I'd share an excerpt from Ethereal Protector, my contribution to the set. 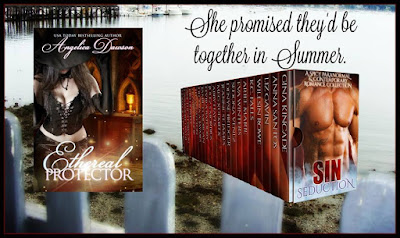 Summer set out of her home and immediately turned, hurrying to avoid notice.

“Mary Parker!” A man stormed down the lane from the large house that sat next to the church.

Summer squared her shoulders and turned to face the man. Running now would make him more suspicious. “Yes?”

“You didn’t come to the town meeting. Surely you want to be part of the cleansing. You must want to wash out the darkness blackening our town’s name.”

Summer shifted the basket of linens on her hip. The pastor wouldn’t have seen it in the doorway. “Actually, Reverend, washing is exactly what I had planned to do. Now, if you’ll excuse me.”

He didn’t move out of her way, and instead lifted one of the many bandages. “Are you expecting a catastrophe? Preparing for the worst? Is your faith so easily shaken?”

Summer took a slow breath before answering. “No, Reverend. I plan for the practical. It is that time of year when our boys try to set out on their own and inevitably someone comes back with a broken bone or deep wound. Don’t you agree?” It was more forward than she should be, but she really couldn’t abide the man and his pretentions.

“Tread lightly, Mary Parker. You may find shifting ground beneath your feet.”

She muttered on her way to the brook. “The only shifting ground here is the pedestal you put yourself on. Horrid man.”

“Mary?” Charles fell into step beside her. “I see you got the linens.”

Summer stopped walking. They were far enough from the village that no one would hear them. “He is improving, but not as quickly as I would like. I’ll need to keep him at least a few more days. I have another request.”

Warmed by his enthusiasm, she felt more sure about asking for his help. “I need you to gather green twigs of willow. You can hack the whole tree down if that looks less odd, but I need more green bark. Can you do that?”

Charles’ gaze shifted, as nervous about this as she was. “What is it for? It’s not…demonic, is it?”

Perhaps he wasn’t nervous for the same reasons she was. “If you disapprove of what I do, you can take Geoffrey home right now, and these with him.” She shoved the basket in his direction.

He pushed it back. “No, no, I’m sorry, Mary. I know it isn’t that. Can you tell me what you do with it anyway?” His face had turned red but the glint of curiosity brightened his eyes.

Summer accepted the basket. “It relieves pain and eases fever. Geoffrey’s fever has been gone since I gave him his first dose, but the pain still wakes him.” She started down the path again. If Charles wanted to know more, he’d have to follow.

“What is causing the pain?”

“I don’t know, and that troubles me.” She gave herself a shake to ward off defeat. “I’ll simply work my way through everything, starting with the chest.”

“More likely his lungs. He has no difficulty breathing, and I don’t hear congestion, but it’s a good place to start. Lungs, heart, liver. Once those are ruled out…” She grimaced. “I will heal him, Charles. If it’s in my power, he’ll be back with you before month’s end.”

“I hope it is in your power, Mary. Liz and Gwen are great girls, but he’s our only son.”

Summer set her basket on the flat rock where she would later dry the clean cloths. “I know. Good day, Charles.”

“Only with the attendance at his ‘meetings.’ Barn burnings more like.”

“Yes, well, you should come to the next one anyway, even if just to be seen.”