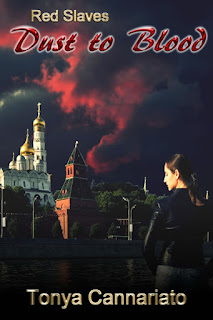 Serendipity would have it that I asked Tonya Cannariato for an interview on the day her novel, Dust to Blood (available on Smashwords and Amazon), releases. It's also the twentieth (or so) day in her A to Z challenge. I've noticed a few blogs accepting challenge, but Tonya's was the first that caught my eye. I wanted to know how challenging it was and if any letters in particular gave her trouble.
Your A to Z challenge is drawing to a close. Which letter did you find the most difficult to post?

Probably J, because this was meant to be all on a specific theme (in my case, my upcoming book release), and there wasn't anything that jumped out at me in terms of characters or themes that were J-related in my book. There is one scene where the protagonist comments about locally made jam, so I ran with that. Z is going to be similar--there's a "random" tourist stop to see where Tzar Nicholas was killed. And X is a Russian word that would normally be transliterated to begin with H, but the Cyrillic letter looks like X and the sound is one of those throat-clearing gurgles that could just as easily be x-related. They all make me feel as if I'm cheating a little, stretching what's in the book to match the A to Z theme.

Do you have the rest of the alphabet ready to go, or are you still working on a few of the upcoming letters?

I sorted out the final five letters a little over a week ago. I'm OCD enough that it was keeping me awake at night not to have a completed plan, so I went back and forth with friends and family asking for help on some of the harder letters. My Z option was actually suggested by a new Twitter friend.


Prior to your latest challenge, which you have achieved with aplomb, you did a number of reviews. How do you choose which books to review?

Two different ways: It started out as a way to let my friends and family know which books I had recently read that they might also enjoy. Then I started getting requests for reviews. I was a little taken aback, but thought this might be a great thing: Free books! With my bookaholism, I'm always looking for ways to keep my book spending budget in check so it was a welcome surprise that people would be willing to send me something new to read--in some cases even before release. As I got into it, I discovered a whole new community of independent authors, so it's been nice that way too.

When you did reviews, did you write/prepare them advance? Did you choose the books in advance?

I'm a firm believer in serendipity, so more typically my blog pattern has been: oh... I should post. What should I post about? What's a book I've really enjoyed and haven't yet shared? It's only when I have requests in the queue that I move those up the line to post before something random I've discovered. And in those cases, I'm thinking about what I'll write as I'm reading--though mostly I try to lose myself in a book, and typically finish it in one sitting. Generally, as soon as I've finished reading, or in the day or two after, I will post my blog review.

Serendipity...No such thing as coincidence! When you reach Z, will you go back to reviews?

Absolutely. From my own experience releasing my book, I've discovered that it's rather difficult to get an indie book reviewed. If I can keep that circle going for some of my fellow authors, I will. The unfortunate element in putting myself under deadline to release my book is that I haven't had any time to read in the past month or so. So I'm not sure when I'll next get around to decreasing my TBR pile.

Where do you get the images you use on your blog?

Since I mostly blog about books, I use the book covers or author images on a regular basis. Otherwise, Wikipedia, Google images, and Dreamstime all have images that work for me too.

What was the biggest challenge in establishing you blog?

I have a day job. I take on other freelance work on the side. Having the time to commit to a regular posting schedule... is a challenge. So there would be weeks where I'd think back and realize I hadn't yet posted, and it had already been a stretch of 10 days since I had last. That's when the panicky feeling sets in. The great thing about the A to Z challenge has been the way it's built in structure for me. Based on the days I see most of my traffic, I'm thinking I'll start an editorial calendar and try committing to a 3-day-a-week schedule. Right now it's looking like Sunday, Tuesday, and Friday are my best traffic days, so I'll plan for those days moving forward.

And my favourite question, because I don't have many followers yet, how did you connect with the majority of your readers?

In about nine days it's my 4th Twitter anniversary. For some reason people started following me there early on, and I built up quite a number of followers. At this point, Twitter, Facebook, and StumbleUpon are my biggest traffic sources. In the last six months or so, I joined Triberr and Novel Publicity, and that has been a new source of contacts.

Thanks so much for letting us be a part of your anniversary as well as your release!
Find Tonya on Twitter
Facebook
GoodReads

Posted by Angelica Dawson at 08:22