Welcome Lynnette Sofras who is known on twitter and her blog as Manic Scribbler. She hosts Writer Wednesday, which looks like a great feature for fellow writers. How do you choose who to host? 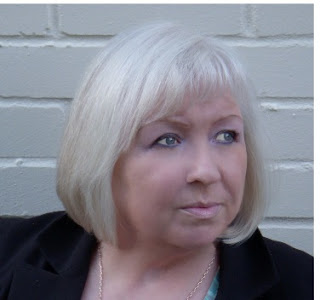 Some months ago all my lovely reviews on amazon.com were deleted and, because when I read a great story, I want the whole world to know, I decided to resurrect these reviews on my blog and that's how I came up with my Wednesday's Writer spot. When I come across interesting writers whose books I've not yet read, I ask them if they'd like to submit a piece about their writing or an aspect of writing for me to post in place of a review. I must say I've made some great friends through this little feature.

I'll bet! Great way to share the love. You recently did a set of features on horror writers for Halloween. How did that idea arise? Are you connected with the authors?

Every blogger seemed to be jumping on the Halloween bandwagon during October and I wanted to do something topical. Rather than just interviews or reviews, I wrote it as if we'd had a cosy get-together. (When my son was very young he asked if he could throw a 'spooky party' for his schoolfriends, where they sat around a pretend campfire (in his room) telling each other scary stories. The idea really came from that). I knew one of the writers previously through her books, but now feel all three are my friends - and one has even become my cover artist since then!

Tries to remember if she did ANYTHING for Halloween... Um...Do you think you'll do any similarly themed features? Perhaps one on Memoires for Christmas, or Romance for Valentine's Day? Note to self: do something for the holidays

I'd love to! That's a great idea - I'll start looking out for writers of Christmas stories to feature immediately.

Heh, you and me both! Where and how do you promote your books/blog? Are you most active on twitter or facebook or somewhere else?

I'm not a great Facebook user, but I'm trying to improve and keep it updated whenever I remember. I tweet a lot though and can be found on twitter as @ManicScribbler.

What do you do when your blog slumps? This happens to me often, so I'm always looking for new coping mechanisms. I'm sure I'm not alone.

Since joining Triberr, I've noticed my blog receives considerably more visits on a daily basis. What I would like to do is encourage visitors to leave comments, not least so that my featured writers can see that their posts have been read - I can see the visits, but they can't. Out of 300 visits, we're sometimes lucky to receive only three comments. Some people email me to say they find the Captcha difficult, so now I've removed that to try to make it easier to comment. 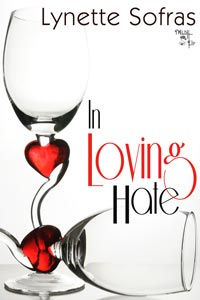 I removed the captcha a while back. I get a spammer every couple of days, but nothing harsh, much more convenient for commenters. I hear you, though. Aside from my fellow participants in Tantalizing Tuesday or Flasher Fiction Friday, I get very few comments. I'll have to do a blog later on how people entice commenters. (Ask all my fellow bloggers for suggestions!)Tell us a little bit more about your latest release, In Loving Hate. Such an interesting title. It brings images of a couple who's marriage is in tatters.


The title came from Shakespeare's Romeo and Juliet. Romeo uses these rather fanciful oxymorons and that one appears in the opening scene. I struggle with finding the right title as a rule. They need to intrigue readers but also give some idea of the book's genre etc. In Loving Hate is a romantic suspense which tests the fine line between love and hate.

You're right, the heroine, Lyssa's marriage is in shreds and she returns to England (from Greece) to start a new life. When she arrives, she discovers her mother, a once-celebrated actress, has sold part of their elegant family home to help settle her crippling debts. Lyssa is shocked when she learns that the new owner is Alex Andrakis, a powerful Greek business tycoon and shipping magnate.

After the devastation of her failed marriage, involvement with another Greek is the last thing she wants. However, despite his arrogant demeanour, Lyssa is drawn to Alex in a way she never dreamed possible, and he doesn't hide the fact that he's attracted to her, too. After meeting Alex' unhappy young son, Nicky, Lyssa finds herself deeply moved by the motherless boy and his mysterious, brooding father.

Lyssa's childhood friend, brewery heiress Nell Winters, has crossed swords with Andrakis in the past and is therefore deeply suspicious of his sudden interest in the family property. When the pair begin to investigate, Lyssa finds herself drawn into a tangled web of deceit that becomes impossible to unravel.

A frightening battle for survival ensues when she's caught in a tug of war between the obsessive Alex and the possessive Nell. Who can she trust—if anyone? And with her loyalties divided, will Lyssa choose the right side in the end so love can prevail?

Just before I give you a tasty teaser from Alex and Lyssa first meeting, I'm going to recap all those links for the Manic Scribbler: Twitter, Blog and Facebook.

On an impulse, she bypassed the heavy oak door into the main body of the house on the first floor and continued up the staircase. The door of the apartment stood ajar; she pushed it open and walked straight in.

The place had been altered almost beyond recognition, its décor and furniture now sleek, stylish, and ultra-modern. She stared confusedly around her as the two occupants watched her. The man near the window, silhouetted against the bright backlight, appeared as little more than a dark outline, but the other seemed to be young, dark-haired, and agreeable-looking; he smiled pleasantly while setting two bottles of beer onto a sleek lacquered black and white coffee table.

The other man moved away from the window and she saw that he seemed to be slightly older than the one who had spoken, also dark-haired, with fine, almost patrician features. But his eyes, which revealed that peculiar quality of gentleness usually exclusive to those who have known much sorrow, curiously softened the haughtiness of his face. Her eyes locked onto his for a long moment as they looked at each other and she felt a distinct connection—an irresistible bond. It required considerable effort for her to tear her gaze away from his.

“I’m sorry.” She moved forward slowly, in confusion. “I mean, I don’t understand. Who are you and what are you doing here? I think you might be…trespassing.”

The younger man, standing closer to her, seemed amused by her words. “Actually, you are the trespasser—but that’s not to say you’re not welcome. I live here, you see. I’m Mark Dimitriou and this is my cousin, Alexis Andrakis.”

He offered his hand but she merely stared in speechless amazement. Dimitriou? Andrakis? Nothing in his voice betrayed it, but those names were undoubtedly Greek. Greeks—living here? She shook her head slowly, dazed almost to numbness. All the anger, hurt, and injustice suffered over the past three years surged up within her and found an outlet.

“Greeks?” She wanted to say more, but her voice abandoned her.

“That’s right. Quite a coincidence for you, I suppose, considering…”

But Lyssa didn’t wait to hear the rest of his sentence. Turning on her heels, she fled from the apartment.