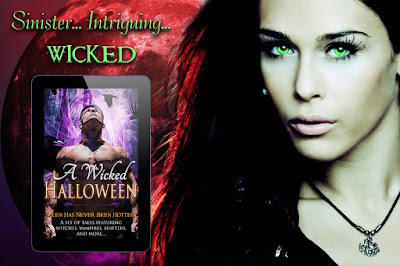 
#99cents for a limited time!
Visit the page: A Wicked Halloween

A Touch of Soul by Gwen Knight
She speaks with the dead.
He was cursed by them.

Four hundred years ago, a coven of dead witches stripped Caleb Jensen of his soul. Now, his only hope is to convince local necromancer, Autumn Kane, to track down and restore it before his eternal hunger consumes him. Beautiful, powerful, and confident, Autumn is more than Caleb bargained for.

Except, Autumn has problems of her own. The dead are crying for help. A serial killer has begun targeting the young brides of Salem, and she is the only one who can save them. She has no time to break the curse on this rakish man who steals her breath. Everything about him unsettles her, from his dark nature to his wicked allure. He’s no knight in shining armor.

But maybe it's time for a little evil in her life.

Charmed by the Salem Witch by Debbie Herbert
At the Women’s College of Salem, Sarah hopes to meet like-minded students of The Craft. But after joining a coven, the other girls seem to have it in for her and she can’t figure out why . . .

. . . until Tanner, the new, cute IT guy, helps uncover her family’s dark secret. Sarah will have to learn to trust Tanner if she’s to survive a killer freshman year. And Tanner must accept his paranormal powers to save Sarah when the blood moon rises at Samhain, the witch’s Halloween.

Malediction by Erzabet Bishop
Nestled in the shadowy thoroughfares of Salem, Bridget has created a new life for herself. Saved from the noose by the mysterious Mr. Black during the witch trials, she runs Broomstix, a thriving curse worker and hex shop. Dangerous cravings thrust her back in harm’s way as evil stalks the streets. Will the allure of the forbidden be her curse or her salvation?

Alistair is a wolf caught between desire and duty to his pack. His Alpha goes missing and evidence of arcane magic and murder come a little too close to home. A chance encounter at a Halloween party brings his beast to the forefront and one night of passion leaves him wanting much, much more.

A war is brewing in Salem between the wolves and witch kind. When more deaths are found linked to rogue wolves, the two join forces. But wild magic reigns on Samhain and the moon may just have a mind of her own…"

Behind the Mask by C.E. Black
Kassandra Darkmorré is hiding behind the mask of humanity, living her life as nothing more than a spectator. She watches, knowing the outcome of the lives around her.

They lived.
They died.
While she was left all alone.

She never imagined one of her hospice patients would figure out what she was or ask for an explanation on her death bed. And Kassandra surely didn’t expect the dying woman to give her something she hadn’t had in almost two hundred years. Hope.

“What you desire most is achievable. You must accept the invitation when it’s presented.”

While on the search for her true desire, she finds the man of her one and only dream, Cyrus Good. The attraction between them is instantaneous, but Kassandra can’t help but feel like something is missing. And that maybe he has secrets as  sinister as Salem itself.

And what about Xavier Drago? The mysterious man keeps popping up when she least expects him to. As annoying and demanding as he is, though, she can’t help but be drawn to him just as intensely.

It all began with an invitation, but will it end with a happily ever after?

Ethereal Protector by Angelica Dawson
Summer Parker has moved to Salem, into her great-grandmother's house. Once there, she is plagued by the sensation of someone watching her. Added to that, she is having strange dreams about her ancestor, Mark Parker, who was one of Salem’s witches. Her human roommates remove most of the eeriness of her predicament, but the intangible roomie is making himself at home too. After a close call, the identity of her resident ghost is revealed. But if Geoffrey is the ghost, does that make her Mary Parker? One thing is certain, Geoffrey is as determined to protect her.

The Party by Charlie Daye
Raina had the perfect life, until the day she lost everything. Wanting to pull her out of her depression, her best friend Gaby suggests a Halloween escape to the spooky town of Salem. It's a weekend to indulge and forget about everything else.

Upon entering one of the many psychic shops that call Salem home, Raina is handed a flyer for one of the biggest Halloween parties of the year. It's a promise of good music, mysterious drinks, tempting men, and a night she won't soon forget.

A Million Shadows by Cecilia Dominic
Former model and heartbreaker Kyra Ellison is accustomed to making trouble, not being on the receiving end. When she’s kicked out of her family’s Ozarks cabin where she's been taking refuge - okay, hiding - after a wicked ancient syndrome wrecked her old life, she's forced to go to Salem, Massachusetts. Yes, that Salem, where a murder, witches with secrets, and handsome billionaire make danger irresistible. Kyra finds she's not the only one with secrets and skeletons in her family closet, but some are more deadly than others. A confrontation with ancient danger and a new foe forces her to choose between the old life she's been craving and the new love that might make everything worth it in the end.

A Modern Day Witchhunt by Kiki Howell and Gina Kincade
Kamillia is an author of paranormal romances living in an upscale suburb of Cleveland, Ohio. Accused of being an actual witch by an ambitious group of businessmen with a dark agenda, she is surprised when she finds a man who resembles one of her fictional, alpha male heroes at her door offering his protection.

So Mote It Be by Phoenix Johnson
She's one powerful Goddess, with acolytes she loves as children. They're her coven, and she will protect them however she can. She is Hecate. As she wills, So Mote It Be.

This inclusion tells the tale of a powerful coven in Salem. They face off against Bokors, demons and fellow witches. Will the power of their Goddess be enough to protect them as they fight to keep Salem safe? Will the women who lead them get the love they desire? Or will they burn in the fires that condemned their ancestors so many years ago?

Salem's Embrace by Sherrie Lea Morgan
Solitary witch Meghan Nightshade is torn between hiding inside her self-made company in Atlanta and returning to stay in her hometown of Salem. One represents new beginnings, and the other her past. When an illness forces her to return to Salem for a short time, she realizes there are forgotten memories among the magic and nothing was the same as she remembered. Between preparing for the upcoming Halloween traditions and falling for the sexy Eathan Callaghan, Meghan is pulled back into the world of magic, covens, and witchcraft. Is she strong enough now to battle for the freedom of Eathan’s innocent sister, or will it cost her too much, and send her running back to the safety of Atlanta?

Midnight in the Salem Cafe by Elizabeth A. Reeves
Witness to her own mother's murder, Lena Scott long ago gave up any hope that she would be able to lead a normal, healthy life. She also thought that she'd left Salem, and that night, behind. She was never going to look back. But, looking back may be the key to more than just that mysterious Halloween night. And her home, her life, and even her work at the Salem Cafe are more intertwined than she ever imagined.

And the past is full of more secrets than Lena could ever have imagined. Everything she believed about herself, everything she knew about herself… all of that comes into question on yet another dark, Salem Halloween night.

De-Witched by Linda Thomas-Sundstrom
In Salem for business, werewolf Kade Willis's new hostess is an intriguing woman whose species begins with the same letter of the alphabet. She's a WITCH. The way Loren Beck Broom gets his fur twitchy might be due to the laws of animal attraction. It might be the way she handles her magic when dark forces come calling. Or . . . she might just truly know the ins and outs of a decent lust spell that will require him to be "de-witched."

Pandemonium Unleashed by Hope Welsh
Micah has one job--to keep the demons in Pandemonium. He's done it without problem for more than three hundred years. It all changes when a powerful witch unwittengly opens portals to the Pandemonium Demon Realm he guards. Can they work together to close the portals before Salem is taken over by the demons?