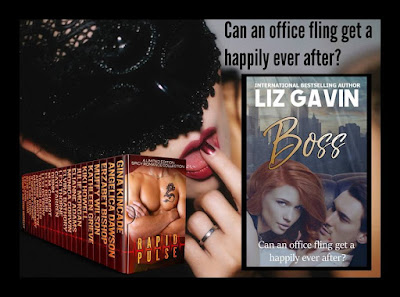 She rules the boardroom and the bedroom, but he makes her knees weak. 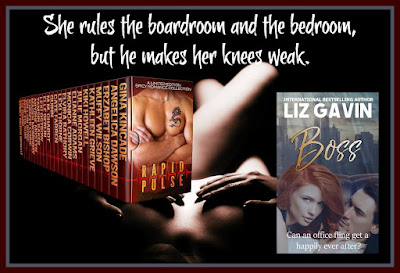 Can an office fling get a happily ever after?
Blurb:

Carol Sullivan built a reputation as a cut-throat NYSE genius. Her opponents called her a witch. In fact, Carol was an alpha female in a profession dominated by unforgiving males. She kept her demons locked and her secrets hidden. Until a certain dark-haired assistant tempted her into breaking all her rules.
Mark Aikens graduated at the top of his MBA class, his rowing team undefeated. He grabbed a chance to intern at Horizon Inc. without hesitation. Working directly with the lady boss was a no-brainer. When her authoritative stance threatened to undo him, he knew he was in trouble.
Will a passionate one-night stand be enough for them? Can an office fling get a happily ever after?


“Anyway, I’m not looking for excuses, I want solutions. Ms. Sullivan is going to join us in a moment and we’ve got squat to show for as it is. You think she’ll be thrilled? Think again. I mean, you do know her, right?”
A contagious frisson spread around the room and Mark was not immune to it. The CEO and founder of Horizon Inc., Carol Sullivan, was nicknamed Wicked Witch of Wall Street for good reasons. She was a stock market high-roller whose opponents, and even a few colleagues, would frequently describe as cut-throat.
As if on cue, the door opened and Ms. Sullivan marched into the meeting room, personal assistant right on her heels carrying a pile of folders haphazardly stacked up in her arms. Mark felt sorry for Julie, the assistant, who sported a pair of suspicious looking tracks down her cheeks. Combined with a red nose and puffy eyes, the marks suggested a recent bout of crying. So recent, Julie didn’t have time to cover them up before following her boss inside a room packed full of her co-workers, leaving everyone’s imagination to fill in the blanks and work out her reasons for crying. Safest bets comprised anger, frustration and self-doubt. If he were a gambler, he would put his money on the last one.
Mark’s blood boiled at the unfairness of the situation. Nobody had the right to make another person cry, especially not in the work place, certainly not if one was the other person’s boss. His defiant gaze met Ms. Sullivan’s and his world tilted when he found himself on the receiving end of a once-over as he had never experienced before. He caught sight of a glint of appreciation in her brown eyes, but her no-nonsense expression, complemented by the stern-looking tight bun that tamed her red curls, prevented him from believing his eyes. His treacherous body didn’t get the message as it reacted to her self-confidence. The submissive in him connected to Ms. Sullivan’s authoritative presence in a way he hadn’t felt in a long time. Probably never, if he were to be honest. Gone was the sympathy he just felt for Julie, substituted by envy. A person had a chance to work close to a dynamo such as Carol, he or she should hang on to it and never let go.
Although that wasn’t the first time he crossed paths with Ms. Sullivan, after all they had been working in the same office for three years, it was the first time her blatantly dominant gaze was directed straight at him. Mark felt his knees go weak at the possibilities, but gave himself a mental slap on the forehead. He’d better wake up from that impossible daydream. Financial genius, lady boss on one hand. Stockbroker rookie, entry-level office staff, on the other. Not gonna happen, dude.

Hi all! I was born and raised in Brazil and lived there for fifty years until I moved to the United States in 2015 for my Master’s program. Although Portuguese is my native language, I write in English. I have translated a couple of short-stories to Portuguese, but the bulk of my work was originally created in English. Go figure!

Hello and welcome! Let's get started. How long have you been a writer and how did you come to writing?
I started writing in 2013 almost as a dare. I didn’t think I’d be any good at it, to be honest. Then, one of my first short-stories started getting five-star reviews and I got excited about it. The feedback gave me enough confidence to keep writing and improving my craft.

How did you come up with this storyline?
So, that short-story that everyone was talking about in 2014 gave me the idea for my first novel. It’s still one of favorite stories, so when I got into the Rapid Pulse Anthology, I knew it would be a good match. So, I wrote a kind of prequel to Upside Down, the novel. In Upside Down, there is an unconventional love triangle with an even more unconventional resolution. Boss, my contribution to Rapid Pulse, is the story of how two sides of that triangle got to meet and develop their relationship.

What are the best and the worst aspects of writing?
One of the best aspects of writing is getting to know the characters. I love the fact that, even when I plot out a whole story, when I get to actually write it, the characters sometimes hijack it from me. Often enough, they also run away with it. I feel like I’m sitting there watching a movie. It’s amazing. One of the aspects I like the least is editing because I want to change so many things. Every time! It can get quite frustrating at times.

What inspires you to write?
It will sound cheesy, but it’s the truth. I want to write the stories that I would love to read.

How did you conduct your research for **Boss**?
Most of the background story I had researched when I wrote the novel. This time, I used the internet to refresh my memory about some details, especially how the global crisis came about during the early 2000’s. My brother is a stock broker and I tried my hand for a couple of months some years ago, so I still remember how the stock market functions. I didn’t need to do much research on that. For the sex club parts, I thought about going to one just to check my facts. I’d rather not disclose what I decided on that. You should read the story and guess.

What are 3 of your favorite quotes from **Boss**?
“The lukewarm embers in her golden eyes didn’t burn him. And Mark yearned to be scorched. He was searching for wildfire sparks like the ones he got every time he locked eyes with Carol.”

“Hope I got the year right.” She was establishing she had ordered the drink for him, as if he needed clarification.
“I’m sure you did. The bartender knows me well.”
“Your assumption being I asked for anyone’s opinion, correct?”
God, I missed her. Apparently, so did his cock. It stirred to life at an almost painful speed.
Sitting down, he leaned into her personal space and whispered in her ear, “I’d never assume anything about you.”

His world tilted then turned upside down. Did he hear her right? Did Carol Sullivan, his lady boss, just inform him she was going to fuck him, in the most literal sense of the word?
What would your friends say is your best quality?
Loyalty.

Are reader reviews important to you? Why?
Yes. Even though I don’t reply to them anymore, for lack of time, I still try to read as many as I can. I find that their feedback can become quite useful when I think about the audience I am trying to reach with my work. In my grad school research, I have been studying the writing process. An author who claims that he or she writes solely for his or her own benefit, in my opinion, is fooling himself or herself. Human beings write primarily for communication purposes, so considering the audience is part of the process. Even if it’s unconscious.

What do you do when you don’t write?
I translate, teach English to speakers of other languages and conduct creative writing workshops with kids.

Tell us about your other books?
Upside Down is my first full length novel, where Carol and Mark meet Cindy and have their lives changed forever. It is a hot F/F/M love triangle with a very unconventional resolution.
Luck of the Irish is my first attempt at a non-erotic story. I failed totally because it’s still quite steamy, but the novel also has a suspense element to it. Finally, Declan is the first book boyfriend I created.
Celtic Fire is my third novel and the first historical/paranormal title I wrote. It’s heavily inspired by Mists of Avalon and all things Celts, a culture that I adore, by the way.
I love rock music, I follow tons of bands, so a series about a rock band has always been in my plans. Knight’s Edge is a series of standalone novels and I’m very happy with the first installment, Tristan. It’s in a boxed set called Tropical Tryst. Noah is book 2 and releases in mid-October.
Readers can find these titles and others at my website – http://lizgavin.com/

Thank you and feel free to stalk me in social media. I love to interact with readers and fellow authors. 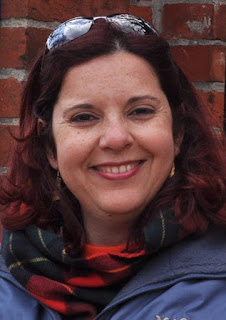 International best-selling author Liz Gavin, has accomplished much in her short career. Her books have made to #1 and Top Five best-selling ranks in her home country Brazil and others as diverse as Japan, the UK and the US; both in English and Portuguese, collecting 5 and 4-star reviews. Nominated for a Summer Indie Book Award in 2016, and again in 2017, this RWA member constantly seeks new opportunities to improve her craft.
This thirst for knowledge propelled Liz to leave the comforts of family and friends in Brazil and move to California to pursue a Master’s degree in late 2015. She lives in sunny SoCal, where she’s researching the writing process, for her thesis, in hopes to figure out why she creates in English instead of her native Portuguese.
Liz Gavin writes in contemporary, paranormal, and historical genres. In her sexy stories, one finds smart, independent women, who don’t need rescuing by knights in shining armor, but indulge in steamy action with swoony Alpha males with big hearts. She also writes about women discovering their sexuality and finding happiness in unconventional setups.