Thank you for inviting me over to your blog to talk about my latest book Miyuki: TheSilence of Deep Snow (US). 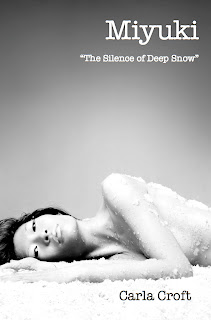 You asked me before what was the hardest part of writing Miyuki. I have to say, it was getting the tone of the story just right. At first her character was quite mercurial. I would be writing away quite happily and then, her character would just change. New thoughts were entering my mind all the time. The language of the story was difficult. I found I had to tone a lot of the language down, as neither she nor Dominica, would use excessive amounts of rude words. Dominica uses the “c” word on one occasion, but that is to test a reaction from me in the story.

The planning was also difficult. I always spend a lot of time planning my stories. It allows me to get the structure nailed down to ensure consistency and to build the plot and characters, but, with Miyuki the planning went out the window a number of times. Eventually it all settled down, but I lost count of the number of times I had to start again. If you change just one tiny element of the story, you have to be very careful about the rest.

The real inspiration from the story, would you believe, came from the name Miyuki. I had the idea for a Japanese sub and was looking for a good name. I went on the net and the name Miyuki leapt out at me. When I saw the translation of the name as “The Silence of Deep Snow”, it was a book waiting to be written. As soon as I had the title all these visions of snow and mountains came to me. The concept of Miyuki as the snow and Dominica as the mountain just evolved and grew. I describe Miyuki in terms of snow throughout. I liken Dominica to the mountains all the time and I also liken their relationship in similar terms. It underlies the whole story and works, I think, very well.

The character of Dominica took a little longer to work out. She changed as the character of Miyuki altered. They were a really difficult pair to get right. Dominica figures less in the story, but she underpins the whole structure, just like the mountain provides the environment for snow to exist.

The story is based around the concept of duality and opposites.  The Dom/Sub relationship really lent itself to an exploration of opposites in these terms and using snow and rock as metaphors gave me a lot of inspiration.

It was also important for me to the get the details of the story right. I wanted to use the art of Shibari in the story, but I knew nothing about it. So I took a deep breath, went on line and found a wonderful lady to help me. I give her a credit in the book for her help and assistance. I really could not have got the story right without her. Any mistakes that remain are all mine. Likewise she also helped with the Dom/Sub relationship.

In my view there has been a lot of bad Dom/Sub writing going on ever since it became popular. I was very aware that I was writing a story about the way real people live and love. To honour that I had to get it right. Their relationships are in need of respect just like all relationships. I didn’t want to blunder into such things without some idea of how they work. This is fiction, but it has to be believable and for that you need truth. I hope I have been able to show some of the truth in the story. I wanted to show the love and the sense of dependence one to the other. It’s why, when Miyuki is describing her relationship with the rope, she is categoric that Dominica is more important to her than any rope. It is also why Dominica opens up to me in the story about what Miyuki means to her.

The story shows how my character’s view of the relationship goes through a change from one of pure desire for Miyuki to an understanding and respect of her relationship with Dominica.

Through the story, I hope that I not only entertain, but educate. I didn’t want to be preachy, but if people stop on occasion and think about certain elements of the relationship, I will be happy. I also hope that they find the sex hot!

The story was very satisfying to write, difficult, at times infuriating, but still satisfying. It has been met with some very kind comments and some reviews that quite make me blush. I realise it will not be everyone’s cup of tea, but I am proud of it and very glad I wrote it. I just hope that the next book in the series will be as good.

As Miyuki’s story closes, she gives me the name of Dominica’s previous sub, Izzie. I track her down and find out her story. Izzie’s story is going to be very different to Miyuki’s. It explores darker themes. After that there is another story which will go even deeper into more extreme areas, but still trying to bring out the true relationships between people. After that, well I have an idea for perhaps one more story in the series that may descend into horror. That will be a completely new direction for me and one I am really excited by, but very nervous about.

Thank you so much for inviting me on to your blog to talk about Miyuki: The Silence of Deep Snow and I hope you and your readers have found it interesting.

You can find Carla on her blog. She also has a book trailer!
Posted by Angelica Dawson at 00:00