Spice It Up - @zarastoneley is smokin' hot!

Hi Angelica, and thanks so much for letting me stop by your blog today.

What inspired me to write this story? Well, for this one there’s a simple answer! I love Barcelona (in fact I’m off there this weekend) – there’s something about the atmosphere, the mix of the new and the old, and then there are the tapas bars...

One of my favourite pastimes is to sit at a bar, with a nice glass of red wine at hand, eyeing up the delicious pinchos (and trying not to eat too many!), people watching. Because a good bar or café is one of the best places a writer like me can be.

I was sitting in one of my favourite bars this time last year, watching one of the sexy waiters flirting with a customer and there was obviously some chemistry between them, which got me thinking…

I hope everyone enjoys reading the story as much as I enjoyed writing it – it was fun! 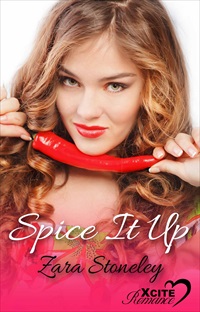 Food critic Ellie Chiltern isn’t happy when she’s sent to review Pinchos tapas bar, the waiter is more Birmingham than Barcelona and the tapas are as lukewarm as her last relationship. She’s struggling to find a positive, until she’s confronted by the only authentic piece of Spain in the bar – Lucas.

When Lucas Martinez sees Ellie, he realises she could be the final nail in the coffin – or the ideal person to help turn the place and its image around. But persuading her to trust him isn’t easy – especially when there’s something burning between them that’s far spicier than the food ever was.
Available from - Amazon (UK), Amazon (US), Xcite Books

"Don’t –" Too late. Her hair tumbled down and her whole body swayed towards him of its own accord. He slowly twirled a ringlet of her hair round his finger and she didn’t feel like she dare move; a tug, a gentle pull that sent a tingle through her scalp, all the way down between her thighs. She swallowed. "Maybe I …" Should go, but she didn’t want to. His thumb brushed over her lips and they parted automatically so that she could taste his skin, run the tip of her tongue over the salty flesh. "I can’t, I shouldn’t, you’re bad news for me, you know."
He ran the thumb up over her cheekbone. "Really?"
"You’ve just given me a day to remember for all the wrong reasons."
"I could make it a day to remember for all the right reasons." His breath was warm against her neck. His fingers played in her hair, sending bad thoughts through her body.
"No." It didn’t sound convincing even to her own ears. "Who was that woman?"
"Later."
His finger moved slowly across her lips and she caught the tip instinctively between her teeth, circled it with her tongue, her gaze locked with his.
"Can I kiss you?" There was something about the catch in his voice that seemed to tug her closer to him.
She might have nodded, or she might not, but he knew. The warmth of his palm was against her neck, his fingers at the nape and then threading through her hair, massaging gently until she couldn’t help but close the gap between them. She wanted him, needed him. His mouth was above hers; the tip of his tongue ran over her lips as his hand reached out for her waist and he eased her gently back until the cold of the wall hit her shoulders.
Zara Stoneley has been writing stories for as long as she’s been reading them. She submitted her first novel, a thriller, to a UK publisher when she was twelve years old.

Zara loves her family, sunshine, wine, good food, caffeine, cats, music, writing and reading - but not necessarily in that order!