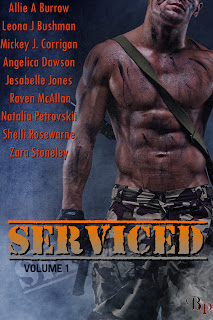 So, Thursday Thrills is taking a break, but I thought this would be a great time to remind you that there are ten copies up to win. We are less that 20 likes away from the end of this contest, so hurry and join in! Serviced is a great tribute to the men and women who protect us and step in to protect others. There are ten stories about the bedroom dealings of the men in uniform and the women who succor them.

Stop by the Facebook page, like it, sign up for the contest, then head over to Breathless Press, or Amazon, or All Romance Ebooks and add it to your wishlist.

For One Night Only by Allie A Burrow
Over A Dead Body by Leona Bushman
Reds, Whites, and Blues by Mickey J. Corrigan
Leave Taking by Angelica Dawson
First Date � The Italian Colonel by Jesabelle Jones
Major's Minah by Raven McAllan
Knock Out by Natalia Petrovskii
A Chance At Love by Shelli Rosewarne
Taking Command by Zara Stoneley
Riding Out the Storm by Natalia Petrovskii
Posted by Angelica Dawson at 00:00