I hope you are enjoying your weekend. To help kick it off, I have a tease from Blue Moon House Investor, the fifth book in the series. It isn't a castle, but it is the first home Sophia has ever owned.

“It is the first time I've had a house,” she told him. Pushing, she swung the door open. “It's perfect,” Sophia said, stepping through the rather small entry way and turning down the main hall. Terrance left his trunk on the spot and followed her. 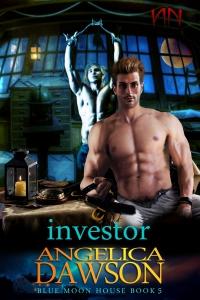 Climbing, he joined them under the second floor's sloping ceiling. It wasn't a full second story, but the large room could be used for almost anything. “Let me know if there is anything I can do.” Nicholas sighed. “Sadly, you can't make people trust us, or keep our secret.”
Terrance frowned. “I suppose not. I will happily be one of those who trust you.”
Sophia backed up, looking at Lynn and then Nicholas. “Terrance, we don't want you as one of our clients.”
He grunted as though she had hit him. That was what it felt like. He'd done everything he could think of. He'd brought them out of America, fed them on the voyage, built them a house. They didn't want him? His anger flared at Lynn's laugh. “You think it funny to take advantage of me? To lead me on?”
She continued to laugh and Sophia joined her, spluttering.
“We want you to be one of us, Terrance,” Nicholas explained. “Have clients of your own.”