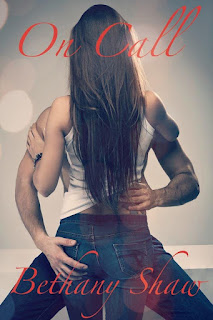 She’s not looking for anything serious, but when hot police officer, Adam asks her out, she can’t say no. A little fun never hurt anyone.

Single mom, Erin, has her hands full with her young son and working as an ER nurse. She’s not looking for anything serious, but when hot police officer, Adam asks her out, she can’t say no. A little fun never hurt anyone.

Adam doesn’t do long-term relationships. He’s seen more divorces than he can count. When an injury sends him to the ER, he finally asks out the cute nurse he’s been flirting with for months. Erin isn’t like the girls he takes out, she’s a breath of fresh air, but that doesn’t mean he’s going to fall for her.

Bethany Shaw lives in Ohio with her husband and two kids. Writing has always been her passion and she loves sharing her stories with readers. When she isn't writing, she is spending time with her family enjoying bike rides, bowling, and board games.

Hello! Thank you for this opportunity to talk about my new release 'On Call' and help my readers get to know me better.)

Tell us about your title featured in this set.
It took me about a month to write On Call. I came up with the name as I was writing it because Erin was always ‘on call’ when she agreed to go out with Adam.

Tell us something about yourself.
I live in Ohio with my husband and two kids.

Tell us about your writing process.
Before I start a story, I do a character write up where I get to know my characters better. What do they like to do? Their background, hair color, eye color, family traits, basically everything I need to bring them to life. Then I plot out the story chapter by chapter before I begin writing it.

What is your favourite genre to read?
Science Fiction Romance

What would you say is the one thing are you most passionate about?
Aside from my family I’d say animal rights. I love animals and try to donate when possible to local animal shelters. All our pets (2 dogs, 2 cats) are rescues.

When you are not writing, what do you like to do?
Spend time with my family. We love to go out for bike rides.

If someone who hasn’t read any your books asked you to describe your story in this set (the elevator pitch!) what would you say?
Erin’s a single mom struggling to get by when she and Adam begin to have a fling. She knows its not going to be anything serious, but he’s cute, has a good job, and can’t help falling for him even if it will break her heart in the end.

Thanks! Have a great day.

“And I thought you invited me out because you wanted to get in my pants,” Erin said, her voice lowering to a whisper as she wagged her brows at him. Heat crept over her cheeks. I can’t believe I just said that out loud. God I sound desperate.

Adam chuckled. “I’m not opposed to that, but I don’t want to complicate things. I’m not looking for anything serious.”

Yeah, you already said that earlier. But...

She shifted in her seat as stared at her plate. He was giving her an easy out. They could keep things entirely platonic, but it had been a long time since she’d been with someone and if someone was going to burst her semi-recently single cherry she kind of wanted it to be Adam. “Who says it has to be complicated? I recently ended a long relationship, and I know you aren’t looking for anything serious. After all, we’re two consenting adults.”

Adam leaned forward. His sea-blue eyes sparkling as he met her gaze. “Too bad you have to go back to work in a bit.”

She licked her lips as her heart fluttered in her chest. So, he is interested. Good to know. “Too bad.”

Adam reached out and touched her hand, rubbing his thumb over her palm in a soft caress. “What time do you get off again?”

“Five in the morning.” She’d be more tired than hell by then and he wouldn’t want to wait up for her. It was probably better that she didn’t pursue this, even though she really wanted to.

“Don’t you think you ought to take a day off?” She motioned to his forehead where the freshly sewn gash was. Even with his forehead split open he still managed to look stunning. “You took quite the hit to the head.”

“Nah. I’ll be fine. I have a high pain tolerance and I don’t like to be stuck lying around. I’d probably find myself in more trouble without something to do all day.”

She shook her head and took a sip of her drink. “If you say so.” Her eyes drifted to her wristwatch and she sighed. “I have to get back.” Sixty minutes wasn’t enough time.

Adam set his napkin on his empty plate. “I’ll walk you back.”

“You don’t have to.” Nor had she expected him to. The hospital was in a fairly good neighborhood, and she darted across the street a lot during her late night shifts.

“Are you kidding? It’s almost eleven. I’ll walk you back.”

She smiled at his thoughtfulness. “Thanks.”

Adam paid for the check and they left the diner. He took her hand in his and they walked hand in hand down the sidewalk.

“There’s a Fourth of July party at Ricardo's. What do you say we get together with Laney and Graham then?”

Fourth of July. That wasn’t too far away. “I don’t think I work that night, but I’ll have to double check. Why are you so intent on getting Laney and Graham together?”

“Graham’s in love with her. I just want to help them along.”

“You’re meddling? I thought you didn’t believe in marriage.”

“I guess, yeah, I am meddling. I don’t believe in marriage for myself, but Laney and Graham, I don’t know, if anyone deserves happiness it's them two.”

He had a point. Graham was a great guy from what she’d seen, and Laney deserved a man who would be attentive to her and her daughter. “I can get her there assuming we are both off.”

“Good. In the meantime, when can I take you out?” he asked.

Erin’s mind raced. Between work and finding a sitter for Caden there wasn’t much free time. “Um.”

“When’s your next day off?”

She was off all day tomorrow, but she hadn’t seen Caden since dropping him off at daycare and she usually spent the afternoon and evening with him after pulling a double. There was no way she was telling Adam she had a kid. They weren’t getting serious and the news would likely scare him away. Men always seemed to run when they found out you were a single parent. She imagined it’d be the same thing in a no-strings attached relationship.

“Why don’t you give me your number and I’ll look at my calendar,” she said.

“You’re not trying to blow me off now are you?” he asked with a grin.