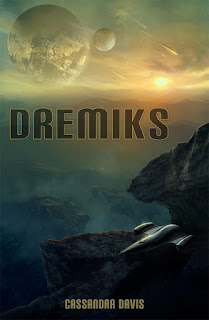 Cassandra Davis is the author of Dremiks, a story about the bonds of friendship and loyalty. Dremiks is filled with the wonder of cosmic exploration, wildly different alien races, and the problems of adapting to space-ship life. The crew and passengers of humanity's first inter-stellar transport start their seven month journey knowing that they are racing against time to save a dying planet. They have no idea, though, the magnitude of the obstacles they are about to encounter.

Cassandra, how did you build your blog readership? Where do most of your readers come from?

My author blog initially drew readers only from my Facebook friends and family. As of the end of April, I am seeing as many referrals from Twitter and Goodreads as I am from family and friends. Since the blog, and the site it is attached to, are focused on my writing, the launch of my book is featured heavily in post content.

Indeed, you often include excerpts from Dremiks and it sequels. Do you find you get better reception for your excerpts or your interviews?


I honestly had to go and break down the blog metrics to answer this question. If you exclude the Science Fiction and Fantasy Saturday postings, I receive more hits to the author interviews than to the Dremiks excerpts. However, SFF Saturday draws a large number of hits every week. Those entries have the most consistent rate of return.

Do the authors you interview have anything in common? Were they all acquaintances prior to the interview?

I decided to do authors interviews as a way to draw readers to the site for the week prior to my book release. The project might have started with a mercenary goal, but I found that I was fascinated by the authors I spoke with. I would certainly enjoy doing more interviews. The 5 authors currently featured on the blog were the first people who responded to my requests for an interview. Ashley Barron and Shelli Johnson I met through Twitter. J.C. Cassels I met through our mutual participation in Science Fiction/Fantasy Saturday. My mother was a rather obvious choice for an interview. It was she who referred Walter Wilson. I tried to find a divergent group of people with great stories to tell. Six weeks after the interviews, I still receive several hits a day to those entries.

That is a varied group! Do you ever have trouble finding something new to post? Will you return to interviewing authors between posts about Dremiks? Are you considering taking your blog in a different direction in the future?

I don't have problems finding something new to talk about as much as I have trouble finding time to post what I've written. I have two grade-school aged boys who are involved in all manner of activities. I often scribble down plot lines or blog posts in the margins of a Little League score-sheet. If there was a way to take my thoughts directly from my brain to the site, I would never run out of new posts. My readers, however, would probably greatly appreciate a lack of such technology. I've been informed, on multiple occasions, that my mind is a dark and terrifying place. I would like to spend more time posting reviews for new authors and friends. I would also love to have another week of author interviews. My blog will always have some link to my published work, but excerpts of Dremiks are going to be much less prevalent.

What one cross-promotion or linkage have you found the most beneficial?

Since readers of the blog have to go to an external site in-order to purchase my book, it is hard to determine which promotional effort has the most impact on book sales. As far as building a community of regular blog readers and Twitter followers, I would have to say that Goodreads has been the most help. The Independent Author Network, however, runs a close second. I really like those two sites, because they provide acess to readers but also because I can find new books to read!

You still have room on your TBR list? jealous Thanks for pointing out Science Fiction Fantasy Saturday. That looks like an excellent networking resource for writers of the genre. If you have any questions for Cassandra, don't hesitate to leave a comment! Dremiks is available from Amazon in print and for the Kindle, as well as Barnes and Noble.
Posted by Angelica Dawson at 10:14