WARNING:
ELECTRIFYING ORGASMS!!!
NOT FOR THE FAINT OF HEART

Miami Rattlers Cheerleader Cherie Redd is exquisitely beautiful, athletic, and very, very lonely. Romance: a puzzling phenomenon she figured had something to do with guys' fear of rejection or lack of self-confidence because they just didn't have what it takes to win someone like Cherie.
Titillatingly sexy and breathtakingly beautiful, Cherie and her other cheerleading friends often spent their lonely Saturday nights lamenting their beauty and available just for the asking. The prettiest single women around: lonely, loveless and forlorn.
Frustrated by too many quiet nights at home or with other cheerleaders, Cherie was oh-so-eager for romance and a man to seduce her lavishly. She wanted to feel what a real orgasm in the arms of an adoring man was like once again. So, she tucked her vibrator away and took to the Internet. Cherie had no clue how rapidly the seduction would begin or where her life would careen as a result. Painfully naive and overwhelmed by admirers before her spinning head cleared, Cherie was learning things her momma never even knew enough to warn her about.
Follow Cherie and her friends as their sexual scoreboards light up brighter than in any stadium as their downward spiral introduces them to hot ménage sex, perversion and degradation.
Or does it?

As the evening darkened into night, the lights of Miracle Mile slowly came on, one-by-one, to welcome the late comers to the Strip. They were clearly interested in one another, their eyes locked in a magnetic embrace. Her emerald eyes lost their golden flecked luster to a dark, nighttime desire, matching Juan’s. Their hands touched often, fingertips communicating the messages lovers speak that only they can hear. Cherie, thinking the better of the two with the most to lose, excused herself to the ladies room.

There was a fiery feeling building up a steam that needed expression and release. In the restroom stall, Cherie raised her dress and put her hand up her thigh. She moved her red thong out to the side as she searched for her honey spot, now wet and eager. She knew this would not take long; so much emotion had burned through her already tonight.  Her head relaxed to the wall and she began to finger herself rapidly as she thought about Juan holding his cigar and the size of his hands. God, but he was handsome, tall and virile. She wondered about his cock. Was he circumcised or did he have a turtleneck sweater? She smiled and released a slight giggle. Was he long, thin, short, thick, wide and flat, bushy or trimmed?  How did he smell: like a warm musky forest after a light rain or like boot leather? Did he like briefs or boxers?  Oh, God, maybe a thong… Oh God, oh God, maybe he was wearing a thong now, or nothing! She could feel the earlier tension redirecting energy to her clit as she became more and more aroused at the thought of Juan’s cock.  She was adept at fingering herself and she wasted no energy now.  She began to moan and move with the rhythm of her hand and fingers.  She released her neck muscles and her head rolled from shoulder to shoulder.  She could feel it all over now, everywhere.  She was electrified, getting wetter with each stroke. Damn, she wished she had her finger vibrator, but she only carried it when she travelled. She would have to rethink that strategy another time.

She moaned, gyrated, clinched and quivered.  She moved in harmony with her passion, with the ebb and flow of her pulse. Her eyes closed floating in the image of Juan, and then she raised her foot to the seat in the stall.  She spread her legs giving her hand full open access: oh, what a vision she must have been.  She was hot, looked sublime, and coming soon in her red silk undies.  Her thong and garter belt pushed aside, she tormented her clit and pussy.  Aware that people looked at her as if they wanted her made her feel better and gave her an emotional edge. She pretended Juan was looking at her now in the same way.

She began to come in her hand: two fire-red tipped fingers plunged inside of her pussy and her red-tipped thumb found the pink pearl of her existence.  She worked herself into frenzied hot passion as she imagined Juan kissing her, holding her breasts, pinching her nipples, bending to suck her aureole and bite her nipples.  Her hardened nipples stretched and made an appearance under her tight fully
fitted dress.  God!  Oh, oh, oh, oh, ohhhhhhhhhhhhhh, God and she released a moan with her breath as she gripped her thighs tightly together, pushed, quivered, contracted and came.  She stood like that for a few seconds then relaxed as she rotated her head and released her neck muscles.  She felt like a new woman: a woman that knew she should be headed home before her quality time with the man at hand, Juan, turned into quality debauchery.

Cherie emerged from the ladies’ room looking like a redheaded goddess, to Juan’s eye. It was a wonder to him what women could do to themselves in a few short minutes to freshen up.  Begging the late hour and an early call tomorrow, Cherie left after the next glass of wine and a penetrating kiss promised more to come. 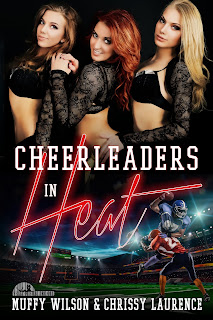 Chrissy Laurence is the cousin of Best Selling mystery writer C.K.Laurence. Chrissy has always wanted to write, but until her dear friend Muffy encouraged her to do so, she kept the manuscript she had started tucked away without moving forward.
Thrilled with the opportunity to collaborate, she forwarded her manuscript to Muffy. It turned out that the two women were a perfect team and the result of Chrissy and Muffy's work is CHEERLEADERS IN HEAT...
Yours to read and enjoy—thoroughly!

Muffy, author of erotic, romantic novels and stories about love, sex, hope and passion, was born in San Antonio, Texas, to traditional parents. With two older brothers, she was the youngest, the family "princess," indulged and pampered. She adored her older brothers, following them everywhere and was surrounded by love, stimulation, and pets. Her father was a career Colonel and pilot in the U.S. Air Force which required the family to travel extensively. The family lived in most points between Alaska and France. Muffy spent her formative years in Europe and came of age in France.Returning from France with her family, Muffy finished high school in Northern California and attended the University of California at Davis and majored in Business Management. She entered the work force, independent with a fierce work ethic, and retired at 39 from IBM as a Mid-West Regional Director in the Real Estate and Construction Division. She and her husband moved to a small Island in northern Wisconsin where they owned a historic one hundred year old tavern, restaurant and resort business which they since have sold.They now live a charmed life by the water in SW Florida. Muffy pretends to be a serious real estate business person but, in real life, indulges her private interest writing sexy stories and sensual literotica.