In anticipation of the release of Alpha Shifter Seductions, a paranormal box set of sexy original stories, I have the pleasure of sharing a tease from Changeling's Revenge by D.J. Shaw.

Basil was pissed! He knew that his brother, Rodion, had been lurking around the last few months but he hadn’t been able to prove it. Well it looked like he had now.
“What the Hell are you doing topside, bro? I thought you hated humans,” Basil demanded as he stood.
Rodion gave Basil his signature smartass grin as he sarcastically replied, “Making sure that you’re keeping your nose clean. Boss wasn’t sure you’d be able to keep your ass in check and it seems that he was right.” 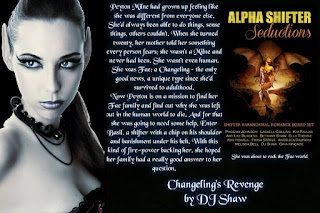 The two men glared at each other as Basil spoke, “Well, I guess it’s a good thing you got here when you did then because the Devil knows I’m incapable of keeping myself out of trouble.”
Rodion chuckled, “That pretty much sums it up.”
Peyton stood and positioned herself between the two men when she saw Basil tense like he was getting ready to pounce on their visitor, “Excuse me, gentlemen. Remember me?”
The men looked at her, making her feel overexposed, “Yeah, hi. While I’m sure you boys would like nothing better than to beat the shit out of each other, Basil here and I were just leaving so that we could discuss some important, and rather delicate, business in private. Besides that, I happen to like this establishment and would prefer not to frighten the owners and patrons. How about we take this outside?”
Basil gave Peyton an embarrassed grin, “You’re right, of course. I would love nothing more than to beat the Hell out of my brother. But I know that you and I have business to discuss, and that must come first.”
He looked over at Rodion and gestured to the front door of the diner, “After you, big brother.” Rodion looked over his shoulder at the door Basil had gestured too and shrugged, “Sure, I don’t mind leading the way, little brother. But you know how much I love to be in the lead.”
Peyton followed Rodion, making sure to keep herself between the brothers. She didn’t have any siblings so watching the dynamic between the two men was something new to her. She only hoped that they would be able to keep their urges in check until they all made it outside.
“Thank you, kind sir,” Peyton said with a smile to Rodion as she walked through the door he held open.

Born and raised in Albuquerque, New Mexico in 1977, DJ Shaw was 17 before she was able to see most of the United States. When she was 17, she decided to join the fair, traveling with them to Texas, Oklahoma, and Louisiana. Once the fair arrived in Lake Charles, DJ had decided it was time to go home, that she had had enough of traveling with the fair. She much rather preferred to sit around writing, or even telling, the lives of the people who lived in her head. She had been good at story-telling from the time she was about ten, when she scared herself so bad with her story of the Boogey-man that she couldn’t move off her bed. Her siblings would come to her for their scare fix, because they knew she could come up with something on the spot.
Having found what she loved to do at an early age, she continued to write down her stories and any poetry that came into her head. She had stacks upon stacks of notebooks filled with her work. Her love of horror movies made her stories that much more chilling.
When she’s not writing, she’s listening to music, supporting her favorite adopted brother and his band “Traveler in Pain”, playing with her five children, spending time with her husband of seven years or watching horror movies in the middle of the night just for the scare factor.