FREE! Today and Tomorrow only! Don't miss your chance to get all these novels in one sizzling boxed set.

And here is another tease from my contribution, Switching Up.

“You did an excellent job tonight. Did it grate at all? Did you have the urge to throw down your tray and storm off?”
“Why would I do that?” she asked, confused. 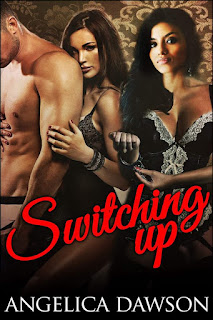 Leo turned her around. “It’s something a brat would do.”
Patty grinned. “I suppose one might. I volunteered to help. It would have been bad form to ditch you in the middle.”
“Well, I think you’ve earned a reward, don’t you?” His lips met hers and she instinctively moved her hands up his arms to lock behind his neck. His hands found her exposed buttocks and pulled her up against him. She could feel how hard he was through his pants.
Patty pulled slightly from the kiss, looking into his eyes. “Carol?” she asked very quietly.
“Is busy a while longer. We’ll reward her soon. First.” His fingers pushed aside the thong and circled her pussy.
Patty’s lips parted and she sucked in a breath, hooking her leg over Leo’s hip. He grinned and picked her up by both, laying her back on one of the benches. She released her hold and he stood to observe her.
“You look so fucking hot tonight. It was hard to keep my eyes off you.”
Patty scoffed. “Every other girl was dressed much the same.”
“True,” he agreed, “but none looked as good as you.”
“Not even Carol?” she asked, propping herself on her elbows.
“Mm, Carol,” he murmured, a hungry look on his face. “Okay, one.”
Patty chuckled, but it turned into a gasp when Leo picked her up by the waist and turned her over. She braced on the bench and kicked.
Leo put a knee to her back and she lost her breath in a huff. “Hold still, brat. You want that reward, don’t you?”
He tried to hold her in the Velcro cuffs attached to the bench, but she undid those as fast as he could latch them. After several tries he gave up on that and sat astride her back. She twisted and kicked, trying to dislodge him. A rain of smacks landed on her upturned ass.
“Stop fighting me!” he shouted, each word matched with another vicious slap. He kept spanking until she stilled, her ass stinging.
“Better. Now, your reward.” Her thong was pulled aside again and Leo’s fingers slid in, twisting and thrusting.
Damn that felt good. She was squirming to new purpose, trying to drive Leo’s fingers deeper, to feel them rub against her walls harder. The pleasure was split by a new slap to her ass. Patty gritted her teeth against the flare of pain, but it only made it sweeter when he returned to fucking her with his fingers.
“You are going to come for me, Patty,” he told her. The hum of a vibrator reached her ears. Where had he gotten that? There wasn’t one in reach and he hadn’t gotten up. She couldn’t think about it long. The large head pressed her clit and Leo’s fingers were thick and firm.
Biting her tongue, she fought it, fought the orgasm that was consuming her. She twisted and bucked once more, barely nudging Leo. Then something inside her broke loose, like a rope snapping and leaving her to fall. Her stomach hovered, a moment of free fall, and then she landed with a crash.

Posted by Angelica Dawson at 09:18