Grab the seventh, penultimate prequel in the Blue Moon House series!
99 cents for a limited time.

What happens when the sacrifice you make for another turns into a life you can’t abandon? Gwendolyn didn’t plan to become a whore. She didn’t expect to fall in love with another woman. She certainly wouldn’t guess that woman was a vampire. By the time she learns, it is too late, her heart belongs to Sophia and she will do anything to stay with the woman, the vampire, she loves.

Enjoy this steamy excerpt from Harlot:

As soon as the door closed behind him, James grabbed her by the arms, spun her around and slammed her back into the door.
“I don't like being told what to do.” His voice was gravelly and low, menacing.
She swallowed and tried to calm herself. She was barely successful. 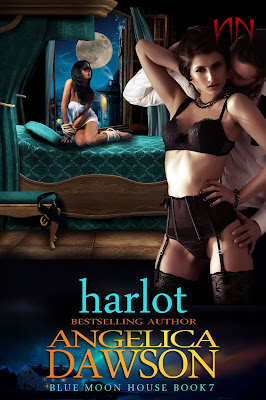 “On the bed, and remove that foolish shift.”
Gwendolyn obeyed silently, instinctively. The authority in his voice was unmistakable and unavoidable. She sat atop the bed, naked, watching him as he gathered a soft, silk rope that was coiled on a chest of drawers.
He rolled her onto her stomach, pulling her arms behind her. She had barely registered that her elbows were lashed together before he was flipping her again and tying her ankles to a thick staff, notched on either end to hold the rope and keep it from sliding along the shaft. Her legs weren't spread uncomfortably, but it was pinching her tied arms, which pressed into the bed. That eased when he picked her up and set her on her feet.
Gwendolyn worried she would topple over, but the staff tucked into the hollow of her ankles and didn't affect her ability to stand at all. She was overcome with a feeling of helplessness, though. She had feigned that with David, but this was real and it made her weep.
Her tears only fuelled James' fire and he braced his hands on the wall behind her, one over each ear. He licked up her cheeks, tasting the tears.
“Are you afraid of me, girl?”
She opened her mouth but nothing came out. His mouth covered hers, and she couldn't answer if she'd been able. His tongue savagely roamed her mouth and she gasped for air when he broke the kiss.
“Now, let's see what you can handle.”