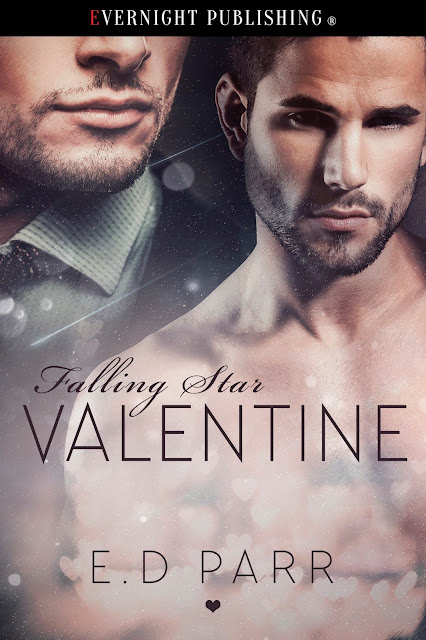 Fashion photographer Dale Walker takes a train to his hometown, relocating there after nursing a broken heart for six months in another city. His train makes an unscheduled stop to take on a mysterious passenger.
For a long time, Valentine Steel has hoped to meet a man who will love him. When he sees Dale on the train, he’s overjoyed to find a vacant seat beside Dale.
Dale’s immediate attraction to Valentine has him on edge. He doesn’t want another broken heart, and yet Valentine is so magnetic Dale’s frozen heart begins to thaw.
Valentine sets out to charm and capture Dale in his sparkling aura. He can’t let the chance to have Dale’s love slip away. This could be his last chance to stay on Earth the planet he loves.
All new teaser
He gazed at Dale’s mouth as his stomach tightened and he experienced an intense longing to kiss Dale. He hungrily watched Dale’s lips move.

“I don’t want to trouble you with my sad little story.”

Dale’s stoic expression touched Valentine. He felt a thud in the region where his heart was. Then a ripple of tenderness radiated to every part of his body and his heartbeat grew strong.
“Oh, but you must. You wouldn’t trouble me. There’s no shame in having a sad story. I had one myself some years ago.” He pushed his hand over the short distance of the table, longing to touch Dale.

Dale took a deep breath and Valentine knew he was going to share his story.
“I broke up with someone, a lover … it hurt to stay in the same city. I’d moved there for this person and now … there’s no need to stay.” Dale stared at Valentine’s hand and edged his own along the tablecloth.

The server arrived at the table with their order.

Valentine waited, impatient now, until the server spread the food before him and Dale, then left.

“I’m sorry. Do you still love this person?” He avoided saying man, although he knew it was a man. Dale’s sexual preference was apparent in the way he looked at Valentine. His eyes traveled over Valentine’s face with a particular gaze only a gay guy would make. Valentine had long searched for a man who made his heart leap the way the sight of Dale did. When he’d heard Dale reminisce about a man, who could only be an idiot to let Dale go, he’d been elated. He’d yearned for Valentine’s Day then, when he could show himself. 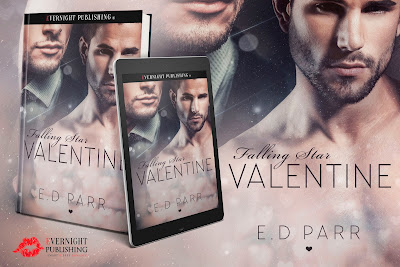 From the author:
The story ‘Falling Star Valentine’ was inspired by shooting stars. We all know shooting stars are falling meteorites, but the romance remains when one streaks across the midnight blue sky. When two, in close succession, zoom over the night vista as you stand on your hotel balcony, it’s a sight to behold. I travel a little with my day job and in the autumn of 2016, I had to travel a lot more than usual. One night when I couldn’t sleep because I was churning worries around, I went out onto the balcony of the hotel room I was staying in and stared up at the sky. The night sparkled cold and the sky displayed an array of stars suddenly seeming only meters away a shooting star flew across my line of vision, then another as if it followed the first.
I’m a die-hard romantic and immediately my sweet but sexy character, Valentine Steel, had formed in my head. He’s Falling Star Valentine on his way to visit. Will he find love?
Find E.D.Parr
Twitter https://twitter.com/parr_books
Amazon page https://www.amazon.com/-/e/B01MUNJ3I8
Blogs https://parrx.blogspot.com
https://parrx.blogspot.co.uk/
https://edparr.blogspot.com
G+ https://plus.google.com/u/0/109826263935095799032