It's the weekend! Thank God. This week was a bit wild for me. Speaking of which, I'm sharing another tease from Not Your Bitch, the same I used for My Sexy Wild last week! Here's the disbelieving Zoe coming to terms with the possibility that this hunk, Linc, is actually interested in her.

“And do one of you have the guy that's going to take his place? Who wants me?”
Linc seemed to appear from nowhere at the side of the table. “I thought I already answered that question.” He sounded so angry, so violent, that Zoe cowered against Sarah. 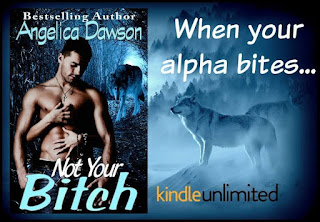 He ground his teeth, his eyes boring into her, and the sensation of being pulled down as prey returned. It fled quickly when he stalked off.
“Holy shit, Zoe. I think he means it. Does he have a friend or something?” Anna turned her head to the side in an appraising gaze Zoe had seen before. She couldn't say she'd taken any time to look at Linc's ass. She'd gotten hooked on his golden-brown eyes and those curls of chest hair she saw the first time she met him.
Her hand went to her face. She'd been blushing before, but felt clammy now.

Well, isn't he intimidating? If you're interested in picking up a copy, you can find it on Amazon.
Posted by Angelica Dawson at 00:00

Email ThisBlogThis!Share to TwitterShare to FacebookShare to Pinterest
Labels: MySexySaturday