GET ROCKED! In Vegas showcases USA Today, Amazon Bestselling, and Award Winning Rockstar Romance Authors as they take you on a sexy musical journey through Sin City with a group of  ***ALL NEW*** stories, many featuring some of your favorite fictional rock bands! Let these scorching bad boy rock stars melt your panties and your hearts as they burn up the stage at a fictional rock festival in one of the world’s sexiest playgrounds!
Boxed Set Compiled and Managed by Gina Kincade 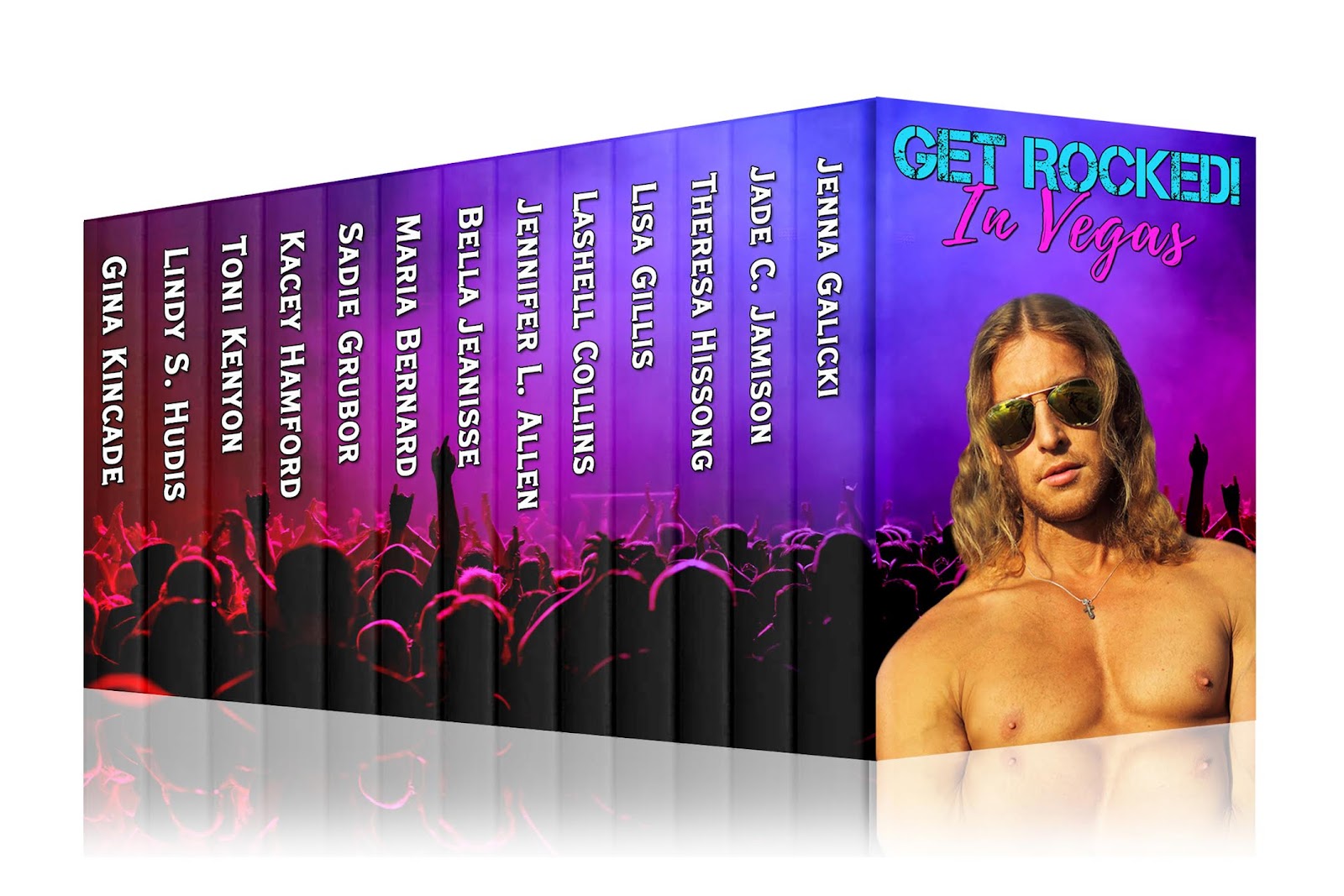 The Stage by Jenna Galicki

Even rock stars get star-struck. Meeting heavy metal icon Brandon Bullet was a dream come true for Tommy Blade. When Immortal Angel decides to add Tommy’s rock star idol as a guest singer to their set at the Get Rocked! festival, sparks fly and egos collide.

Angel Garcia, Immortal Angel’s flashy frontman, isn’t happy about sharing the spotlight or Tommy’s attention. That all changes once Angel has a mind-blowing rehearsal with the charismatic lead singer of Bulletproof.

The sexual chemistry on stage between Angel and Brandon is something Tommy never counted on. Now he’s forced to watch his husband and his idol strut on stage together and share a connection that, up until now, only he and Angel shared. And the guest appearance by Tommy’s rock star idol just lost most of its appeal. Commissioned to design custom-made rock and roll attire, even Tommy’s wife Jessi gets one-on-one time with Brandon Bullet.

Taking a back seat wasn’t on the agenda. Add Angel and Brandon’s secret rehearsals together, and Tommy is left in the shadows wondering exactly what’s going on between the two. Like everything else in Tommy’s life, it all unfolds on stage.

Epilogue by Brandon Bullet of Bulletproof.

If you thought Las Vegas was hot…

Brandon Bennett, inexperienced young drummer for a famous rock band, is about to play his first festival…but before that he needs to find out who’s stalking him. And, when he does, things just might get too hot to handle…

Something Wicked by Theresa Hissong

Aiden Hawke, the lead singer for the rock band Something Wicked, was used to raising hell and partying every night with his all-male band. When their bassist quit right before the beginning of their tour, saying he needed to go back to a normal life, the band hired on a female to take his place.

Kit Ellis knew she was stepping into a predominately male industry when she signed on with Something Wicked. There weren’t that many female bassist in the business, but the gutsy woman knew she could run with the big dogs. Her dream had come true when she landed a spot as the newest band member for Something Wicked, but there was one problem she had not anticipated. Aiden Hawke ignited something inside her, and with each day spent together, their heated glances and casual flirting sent her hormones straight into the danger zone.

One steamy night at the Get Rocked Festival in Las Vegas, Aiden and Kit find themselves giving in to their need for each other. Can the two of them survive when Kit’s family calls with news of trouble at home, or will Kit give up her dream after she realizes that she crossed the line by falling for the lead singer of Something Wicked?

With this ring… or not?

June Loren and her metal-music-god have an open relationship. No drama. No complications. That is, until down on one knee, he slides a ring on her finger and suddenly declares himself monogamous. Convinced there's no way this man-whore musician who spends two-hundred-plus days on the road is faithful husband material, she jets to Vegas… the perfect venue to escape her life and her wedding the next day.

After getting kicked out of his band and a stint in rehab, one-time rock star Creighton Stone needs more than a little luck to get his life back on track. A reunion gig at the Get Rocked Vegas Festival is an opportunity to redeem himself. But when he’s sidetracked by an intriguing woman at the blackjack table, his world flips upside down… again.
Hard liquor and heavy partying lead to waking with more than a hangover. The gleaming rings on their fingers suggest Creighton and June had more fun than a one-night stand.

Everyone knows "What happens in Vegas stays in Vegas."

The boys of Jagged Ivory are back, and this time they’re rocking the Nevada desert!

When Jagged Ivory is asked to headline a night at the famed Get Rocked Music Festival in Las Vegas, their bassist, Benji Staffon, sees it as the perfect opportunity to finally put a ring on it. He and his girl, Fae Miller, have both been through hell and back, overcoming addiction and other life struggles. Now all they want is to usher in a whole new day for themselves and their future. But when the pressures of planning a Vegas wedding and the bachelor party blowout from hell start to weigh on him, Benji begins to wonder if a real future with Fae is something he’s even capable of having.

Join Jagged Ivory on their music festival tour stop and witness the dawn of a whole new day for the entire band!

Lee Taylor, drummer for Sweet Hostility, is elated when they win a local contest and get to participate in one of the biggest rock music festivals in the world: Get Rocked! In Vegas. Together with her three bandmates/best friends, she travels to Las Vegas and gets lost in the heat and excitement of Sin City.

Ash Keller, lead singer for Rhythms of the Restless, feels like he hit the jackpot when his band gets picked to go to Vegas for the annual Get Rocked! festival. It’s his chance to leave his past behind and make something of himself. He’s instantly caught up in all—and who—Las Vegas has to offer.

When Lee and Ash meet, a force pulls them together and doesn’t let them part. Join them for a weekend full of sexy rock-n-roll.

Prelude to a Wicked Wedding by Bella Jeanisse

Brandon Knight, lead guitarist of the rock band Wicked End, is thrilled to have his fiancé, Mackenzie, on tour with him. Being chosen to play at Get Rocked! In Vegas is a dream come true for him and his band. The weekend will be filled with great music and sexual fun. He wouldn’t have it any other way.

Mackenzie Winters is excited that they will have an entire weekend to explore Las Vegas and each other. She is anxious about their upcoming wedding, so she needs the escape. She wants nothing more than to marry Brandon, but planning a big event when neither of them have actual family to share it with, is tough.

In this Wicked End novella, you will get a taste of all the band members. Each has a plan for the weekend. Nothing goes the way they expect, but then again, why would they on this wild and wicked ride!

Wicked End: Kink, mayhem, disaster... You never know what's next when on tour with Brandon, Scott, Austin, Chico and Jake.

Stand Up and Shout by Maria Bernard

Gifted up-and-coming singer, Jay Sharp is destined for rock star greatness. Problem is, he suffers from crippling stage fright. Despite countless chances to prove himself, and tireless encouragement from his famous mentor Ashton Wright of the Stick Shift Lips, Jay freezes every time he is in the spotlight.

Alice Electra is an amazing guitarist on the run. Fate leads her to Southern Jackass, Jay's struggling rock band. She is offered a chance to shine.

Right away, Alice and Jay form an unshakable bond. Together with their fledgling band they face a challenge greater than ever. Failure is no longer an option. To succeed, they must kick fear in the ass!

Known for his outlandish and often law breaking onstage performances, the fans of Vehicle of Destruction have expectations from America's number one bad boy of rock. Zarek Sisko hates to disappoint, but something's not the same. Something changed him. That something being her.
The world of opera is surprisingly cutthroat and Gemma Harper, the latest diva in demand, knows this all too well. She's a natural commanding an operatic performance with minimal training, but apparently, pink hair, facial piercings, and being covered in tattoos negates her talent in most professional's eyes. Gemma's fought her entire life to get what she wants and now that she's here, there's no backing down. She's no quitter… well, almost. She quit on him.
Once upon a time, two people from different worlds collided and it was everything they never expected. Until it wasn't and one walked away.

Pretending you don't know someone is exhausting. Acting like someone means absolutely nothing to you isn't easy. Especially when fate keeps throwing them back in your life.
One Rocker. One Diva. One weekend to Get Rocked in Vegas!

With the guys from ‘Flix’ getting ready to head home to the U.K they didn’t realise that this final weekend away was going to change everything for guitarist Frank.
Stepping on to the bus and seeing him there left him reeling… he had no idea how different his life would be after this weekend.

He should have known that what happens in Vegas, never stays in Vegas…
This is an M/M story and is not suitable for anyone under the age of 18, due to strong language and sexual references.

Sam MacAvoy’s a British rocker who has charted consistently at no.1 all over Europe since following in his brother, Julian’s footsteps. Now Sam’s been invited to Vegas to debut at the Get Rocked! In Vegas Festival and he’s brought his red hot band, Style Strike with him.

Ashley Jacobs can’t stand musicians, or over-the-top egotistical men. Somehow she finds herself in amongst dozens of them when she agrees—against her better judgment—to take a three day summer job at the Festival.

Paul Gray, Style Strike’s bass player and the star of his own social media channel, has women falling at his feet. What he can’t quite understand is why his charm isn’t working on the attractive and curvaceous, Ashley. She’s not interested in his social media stardom, nor does she care that he could have any woman he wants at the rock festival.

Diego has it all! A life in the fast lane, parties, booze, drugs, power and sex. However, the bright lights can't erase the price he paid on the raw, lonely road to the top. Diego has rocketed to fame as his heart is starving.

His one and only soulmate, Susan, who has been his constant companion and true love, will become a permanent fixture in his life. Unbeknownst to her, he plans to present her with a Cartier diamond engagement ring.

Fates collide. As the music blasts to a climax, one deranged and obsessed fan and her secret, rage filled vendetta will trap each and every one of them in its sudden, murderous heat.