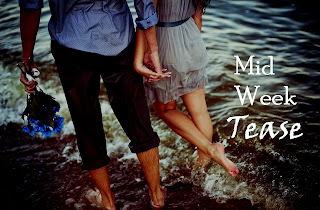 For today's MidWeekTease, I want to share a snippet from Winter's Embrace. You can read it today by picking up a copy of Wayward Magic, which release today!!

Sometimes magic goes as planned. Sometimes, you get Wayward Magic. 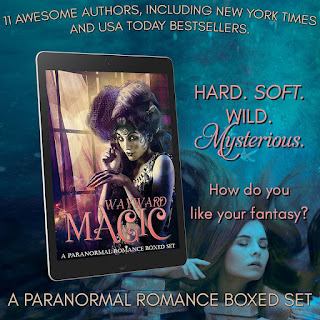 Dive into eleven lush novellas full of magic and mystery that break the mold of traditional fantasy and romance with exciting, daring, and original stories.
From sinfully sexy, to devastatingly romantic, to charmingly sweet, this paranormal romance collection will capture your heart and keep you on the edge of your seat to see what happens next. 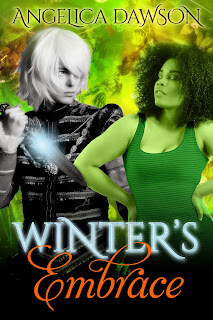 Verte stood under a black sky. Tiny white points dotted the expanse. Around her dark shadows loomed. No color at all.
She shook to break free of the nightmarish world with no color, and woke in one equally monochromatic, her arm freezing. Against it lay the grey faerie. Peaceful in sleep, his silvery lashes rested on a pearly cheek.
Pulling her arm away, she rubbed to warm it. When it no longer bothered her, she reached out to touch his face. The fire below had burned out and her magic was spent. Fortunately, that prevented the spark from earlier and he didn't wake at her touch.
She traced his brows, his nose, his lips. She had never seen a Winter faerie this closely, never known how colorless they were.
He inhaled when she touched his throat and covered her hand with his.
“Mmm.” He stretched and opened his eyes. The focused slowly. “Green,” he said, releasing her hand to touch her face. “You are very beautiful,” he told her. “I watched you sleep. Did you know your mottles change?”
She frowned. She wasn't mottled.
“The brown stripes here”—he brushed her arm then her thigh—“and here, shift, becoming darker and thicker. Do all Summer fae do that?”
She rubbed her arm. “Not that I know.” She'd watched Cocoa sleep, but he didn't change.
Grey didn't seem surprised. “It's a small change, only a few shades.”
Verte moved her hand to his bare chest.
He smiled. “No zap.”
She nodded. “My guess is the fire. It's out now, isn't it?”
“Oh,” he said, frowning. “I didn't mean to let it go out. You must be cold.” He began shifting covers but stopped at her touch.
“Actually, I'm warm enough for now.” She wasn't truly warm, not like home or even in front of the fire, but she wasn't cold either.
She slid her hand over his shoulder. His fingertips grazed her cheek, and her hand slid over his ribs. His hand trailed down her back.
The two continued to exchange gentle touches, watching one another closely. It reminded Verte of how they sometimes tamed animals.
“Who is taming who?” she wondered aloud.
Grey pulled his hands back. “I wasn't...I didn't mean...”
Verte smiled. “I'm doing the same,” she told him. “It's as though I'm afraid you'll run.”
“But neither of us can,” he said. They were obligated, sealed to one another for the length of the peace. Verte meant to keep it as long as possible.

Hop around and enjoy all the teases this Wednesday, and if you want your copy of Wayward Magic, get it on Amazon.