After a cold wiped me out last week, I'm back with a teaser this week! I'm offering a snippet from my frisky faeries, found in Winter's Embrace. That novella is one of several bundled together in Wayward Magic for a mere 99 cents! 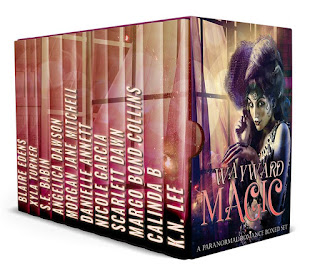 Sometimes magic goes as planned. Sometimes, you get Wayward Magic.
Dive into eleven lush novellas full of magic and mystery that break the mold of traditional fantasy and romance with exciting, daring, and original stories.
From sinfully sexy, to devastatingly romantic, to charmingly sweet, this paranormal romance collection will capture your heart and keep you on the edge of your seat to see what happens next.


Here's an excerpt from Verte's experience in Winter, segregated from her friends and family in Summer:

“Dammit, Verte,” he shouted, gripping the fabric that covered her head. “Talk to me.”
She touched his wrist, directing the Fire magic she held.
The jolt went both ways. Her own heart raced and her nostrils flared, flooding her with his scent, similar to the snow or rain. It wasn't unlike some Summer men, but most had a musky or perfumed smell that Grey lacked.
He didn't let go, pushing the fabric back and cupping her cheek. As he moved closer, she pressed her lips, resisting the kiss she knew was coming.
His pale eyes grew even colder, harder, piercing her like ice. “Stop fighting me.”
She jumped when a chill ran down her back. Winter magic. She cried out when it turned into a stinging slap on her behind. It was followed by a warm rush, Fire magic, that pooled at the base of her spine, nestling low in her hips. Her breathing became heavy and deep. Her lips parted and Grey pushed in, pulling her tight to him. His cold hands sent a chill through her clothing and his lips were like ice, biting hers. Her tongue froze as well when his entered her mouth.
She raised her hands to push him away, protect herself. The freezing would burn. As she did, however, her Fire magic betrayed her. She gripped his shirt instead, returning his kiss with a passion of her own.
Her knees started to tremble and Grey picked her up. Although she quivered, she tried to fight, kicking and shoving. Icy bands secured her ankles and wrists, cold aching up her limbs. Thankfully, the bonds were over her stockings and sleeves, dulling the pain.
“Stop fighting yourself.” His lips were still close enough to brush hers as he whispered. “I can feel your heart race, and your eyes and cheeks just got browner, darker. You want this as much as I do.”
“No,” she argued, denying. “I don't want you to touch me. Put me down.”
“No. Not here.” He laid her on the floor in front of the hearth, a lonely ember still burning. Without releasing his ties, he ran a hand under her skirt. The stockings protected her for a while. She continued to fight his bonds but couldn't do more than twist. His fingers passed the top of her stocking to touch bare flesh. Fire magic flared and she gasped, arching. Her knees fell slightly open despite her conscious wishes otherwise. It seemed her body had ideas of its own.
His touch burned for only an instant, Winter to her Fire. She expected him to use his own Fire magic against her, once she'd managed to seal hers away again. It was obvious neither of them could resist the surging waves of pleasure that came with it.
His eyes locked on hers when they opened and no magic accompanied the soft caress of his fingers. She gritted her teeth, continuing to resist, but the rush when he spread her wetness was undeniable.
“Please, stop,” she begged, her head falling back and tears filling her eyes.


“Tell me why?” His hand stilled on her skin. “You want this.” Her hips answered him, trying to move against his fingers. “I want it, too,” he admitted, leaning over her. “I want to see your eyes and skin turn dark. I want to smell the blood moving through you. I don't want a Winter woman. I want you, Summer. I want your life, your color. Grow for me, Verte. Swell.”