Sexy Saturday! I'm happy to give yet another sample from Not Your Bitch with the great news that it will be available in the Steamy&Dreamy boxed set. 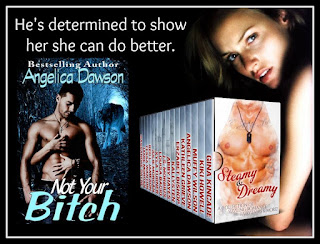 Featuring NYT, USA Today, and Amazon bestselling authors, this collection satisfies with its wicked paranormal alphas to sizzling contemporary romance.
Click now to enjoy the diverse, hetero and same sex tales, scandalous fairytales, and more, crafted by some of your favorite authors to tempt and titillate your senses.

Zoe has never had much luck with men, so when Elliot came along she was willing to do almost anything to make the relationship work, even accepting his choice of endearment, bitch.
Linc doesn't understand why she puts up with Elliot, and he's determined to show her she can do better, even if it’s a guy who turns into a wolf once a month. She’s not his bitch, but she will be his mate.

And here are seven paragraphs:

The little brown being, with no antlers to speak of, hurried away. It probably wouldn't survive without someone to show it the way out of the city, even this close to the edge. It would fall to the coyotes, if they weren't too stuffed on rabbit. Death was a part of life, so Linc didn't spare the calf another thought as he and his cousins binged on the moose. An hour later, Wash was done. He had curled up, tail covering his nose and blood matting the fur of his chest. Aunt Norm was going to have fit when he came home to shower.
Franklin and Adam each headed toward home, leaving Linc alone with the pup. He didn't mind. He had to go back to Auntie Norm's for his clothes.
Linc splashed in the creek, soaking himself from nose to tail. With any luck he'd just need a rinse in the morning. He looked back at Wash sleeping and left him to check on the house.
From the edge of the trees he saw her, sitting on the bench atop his clothes. Her figure was hidden in the coat she wore against the autumn chill. Beneath, she wore flannel pants. Perfect for sleeping, but not daily wear. She didn't look like much of anything.
When he inched close enough, he saw the tears streaking her cheeks in red and white lines. Her sobs came out in little puffs of steam and he cursed being a werewolf for one of the first times in his life. He wanted to comfort her. He wanted to tell her that she deserved better than the asshole she was with. She deserved...so much more. More than a man that disappeared three nights a month. 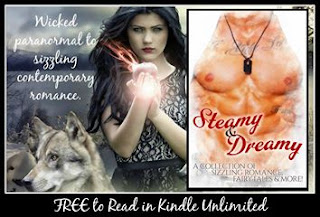 Linc had never had a steady girlfriend. He had a circle of lady friends, though, and a few indulged him from time to time—the ones that had no plans to settle down. He was constantly picking up girls, too. At the bar, at the coffee shop, in class at the U. He had never stayed with one more than a couple months. It wasn't that he had picked girls who were jealous of him taking off. Most didn't even notice, but after a month, he was ready to move on. Franklin called it the “Littlest Hobo” effect. He was one to talk. He'd been with Celeste since high school; no ranging for him.
No, Zoe deserved more than he could give, but she needed to ditch the dick.

You can preorder your copy of Steamy&Dreamy now! There are more sexy snippets ahead!