Grab this special pre-order price before it goes up!
99c
Join the dark side with ***ALL NEW*** stories from some of your favorite NY Times, USA Today, and Award Winning, Bestselling authors.
Step into the shadows with witches, werewolves, shifters, vampires, and soul mates: the sizzling hot alphas you love.
Are you fated to find your fantasy lover in these seductive, steamy pages bursting with danger and desire?
Claim your book boyfriend now! 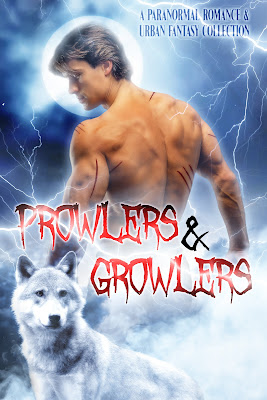 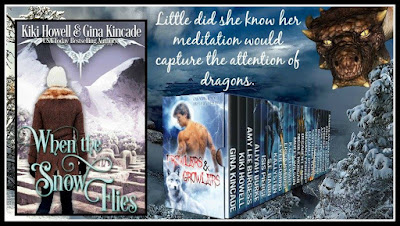 She never dreamed there'd be dragons... 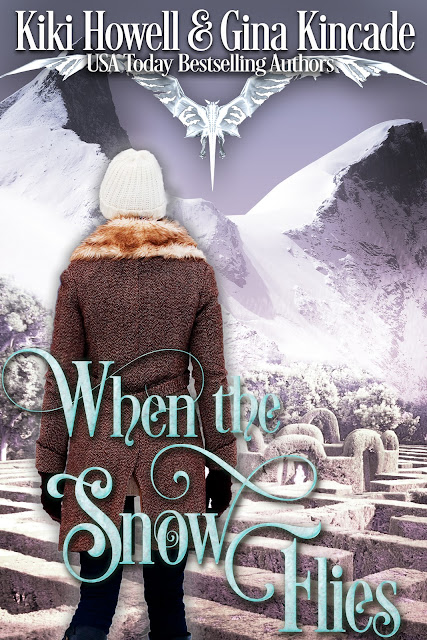 When the Snow Flies

On a spiritual journey to heal after a tragic accident, Anna thought the worst that could happen while walking in a labyrinth was to be taken by a stranger. A human stranger. Little did she know her meditation would capture the attention of dragons.

A few more deep breaths later, she shivered violently, but began her trek around the labyrinth. She stumbled over the stones that edged the pathway a few times when patches of clouds blocked out the moon’s light. Looking up, she expected to just see a glimmer of white brilliance fighting to shine through the delicate filaments that had become infused with dark grey matter. Instead, a shadow flew over her. One too large to be anything her mind could figure out.
She hadn’t realized that she’d fallen to a crouch until her body swayed as she looked up, trying to get a better impression of what had to be a plane or something descending to the earth. Strangely, she hadn’t heard a sound. In fact, the eerie silence unnerved her further. Her trembling fingers pressed against the frigid dirt as her only source of support. Falling to her butt as her gaze followed the tremendous mass, she made out a body too rounded for a plane, with wings too animal-like to be inanimate. In a split second, a scream lodged in her throat as the wing things flapped, rustling the tree branches with sudden gusts of air. A long tail seemed to follow behind, swinging to one side as it glided effortlessly around to come back her way, losing altitude as the thing moved.
She stayed in that odd position, seated on the ground, body curled up, with one arm back behind her holding her up as she used the other one to cover her face while the ground shook beneath her when the beast landed maybe ten feet away. With her heart pounding so hard she could hear the erratic beat of the damned thing in her head, she blinked several times as the image before her registered to fantastical proportions. The fact that Anna saw something out of a storybook or a fairy tale made the only sense her perceptions could come up with, and that unnerved her. So much so, she was wound up like a clock about to explode, spewing gears and gadgets all over the place. The analogy for her head being about to explode based on an image from an old cartoon she’d watched as a child gave her pause. A moment of lunacy that served as a much needed reprieve, since reality didn’t make any sense at all.
Coping mechanisms. She’d heard a lot about them in therapy. In fact, she’d basically left the practice since she hadn’t been ready to give them up. Snippets of songs would come into her head now, memories from childhood of dancing like a loon in the kitchen with her mother when holidays provided long days of baking. These created a preoccupation with remembering every word of the tune, looking up the video, studying the career of the singer, all in an attempt to calm the sudden onslaught of tears. To numb the painful ache in her chest.
At times, she raged at her body. Her heart had the audacity to feel like it had stopped beating, if even for a second. Her lungs deflated, ceased to do their job. All of these sensations served as a tease when she had to remain in this life, too squeamish, too much a coward, to end her own existence though she’d failed their suicide test more than a few times. The desire to find peace in the afterlife with her lost family got trampled by a lesson on suicide and sin her mother had once taught her. Though, she didn’t even know what or if she believed anymore as far as beliefs went, anything to do with faith and religion.. The closest thing she’d come to prayer was the screaming in her head. The raging at some invisible entity around her so-called life.
This confusion continued, rattling her to her core, as this thing, whatever the hell it was—and hell born it could be, given its monstrous size and shape—stared at her. Metal-colored eyes glistened in the faint, cloud-infused moonlight. The size of footballs, they blinked in a never-ending gaze that mesmerized her. The world seemed to spin as millions of overacting nerve cells tensed her muscles to run. Yet, she didn’t move for some strange fear of being swallowed up whole or burnt to a crisp like in those stories of dragons. Sadly, as her eyes focused, the more this thing as tall as a house resembled just such a mythic creature. It seemed the fundamental law guiding her decision to remain a statue was the thought that if prey moved, it got eaten.

Kiki: Hello! Thanks for having us.
Gina: Yes, thank you for having us both on. We are a team again for this one.

How did you come up with this storyline?
Gina: We toss back and forth ideas all the time. I think this time that Kiki came up with an idea about a dragon shifter, and the whole labyrinth, healing meditation, thing.
Kiki: Yes, I actually have this non-fiction book of spells to contact dragons. In it the lady tells you all about the dragons she met that way. So, I found the book interesting and inspiring. Then, Gina started building off of my idea, and off we went again!!!
What are the best and the worst aspects of writing?
Kiki: I would say editing and blurb writing, but Gina is great at both of those, so again, another reason we work so well together.
What inspires you to write?
Gina: I think I can answer for both of us when I say, anything and everything is fair game. And, some of the stuff is just a wild imagination that never stops. We've discussed this before.

How did you conduct your research for **When the Snow Flies**?
Kiki: Well, I will admit to being the research junkie. Spend way too much time doing so. Mostly books I get my magic information from, but internet searches helps too. A perk of writing paranormal is the info on the internet need not be true. *winks*

What are 3 of your favorite quotes from **When the Snow Flies**?
Gina: Now that would be like asking us which is our favorite child.

What would your friends say is your best quality?
Kiki: I met Gina when she read one of my stories about ten years ago now. Next she published one of my stories. Beyond the work relationship though, we became quick friends. She is so caring, so willing to listen, to offer help, professionally and personally. She is trustworthy, a workaholic, and just has such a big heart. She does so much for so many.
Gina: Kiki and I are a lot alike, in so many ways, and all those things she listed about me, I could say of her, and then go on and on about how sweet she is, how willing to work, etc. I just wish she lived closer.
Kiki: Me too. *hugs*

Are reader reviews important to you? Why?
Gina: Of course. They are everything. I don't think anyone realizes how much they help authors. And, while reading a good review is amazing, an author can use even the bad one constructively in future writing.

What do you do when you don’t write? Like in “Real Life” Kiki: For me, I spend time with family, read, knit or other crafts when I'm lucky enough to find the time, and have become obsessed with the adult coloring books. Oh, and I started teaching yoga recently.
Gina: My kids are younger than Kiki's, well two of them are, so lots of time taking care of family, I love to cook, and read of course. Lots of other things I could list if only I had the time to do them.

Tell us about your other books?
Kiki: We have written two other paranormal stories together, which are novel length.
What Lies Within Us
On Amazon
and
A Modern Day Witch Hunt
On Amazon
Gina: We have also written a novella called
Cowboy Boots and Handcuffs
On Amazon
the first in a planned collection of steamy contemporary western romance books
Gina: Thanks again for having us both on today. 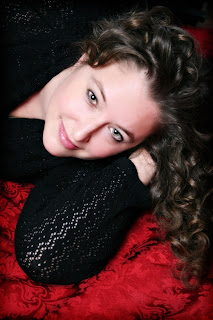 “These authors raise the bar on Kindle paranormal romances.” 5 Star Review for What Lies Within Us 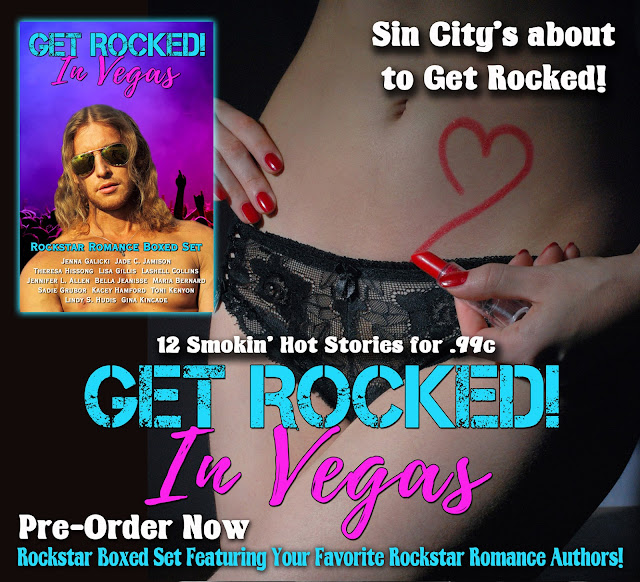 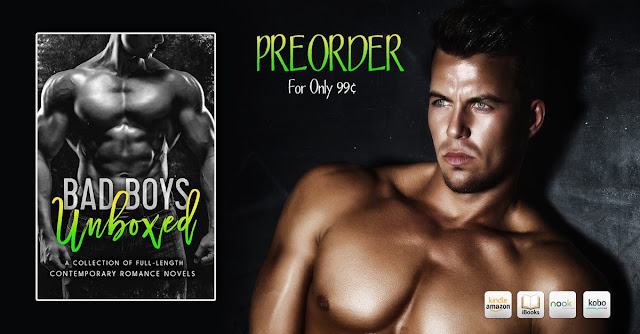 © 2000-2023 All rights reserved by author(s). Content may not be copied or used in whole or part without written permission from the author.