You want me to choose just one mythical creature that’s my favorite? That’s like asking me to choose only one ice cream flavor or tell you which Doctor in Doctor Who was the best! (*cough*Ten*cough*)

I’ve changed my mind a few times but I’m going to settle on Cthulhu, an old god that is a part of the Lovecraftian mythos. As a big fan of both H.P. Lovecraft and horror in general (I was reading Stephen King at 7), the idea of an ancient being so alien and unable to be understood, lurking in the depths below hits all the pleasure centers in my brain. I can’t tell you why that appeals to me so much but there are hints of it in my own work, subconsciously added. 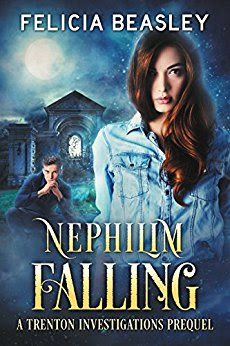 They say demons and angels don’t mix. I say people should mind their own damn business.

My brother, Damian, has been my rock ever since mom left. Didn’t matter that I'm demon-blooded. I was his and he was mine.

But nothing lasts forever.

He wants me to go to college. I’d rather fight a hundred sentinels than lead a boring, safe life hiding who I am. So when a nephilim goes missing, I go behind Damian’s back to find the teen. Maybe if I can solve the case, he will upgrade me to his partner in crime solving.

As bodies begin dropping, I realize I’m in way over my head. But there’s no way I’m going to admit that, not when my future hangs in the balance. It's do or die time, and I'm not going down without a fight.