Given Time by E.D. Parr @parr_books


I wrote this story intending to dedicate it to someone in the front of the book when the  publisher asked if I had a dedication. In fact, I didn’t when given the chance, because it no longer seemed appropriate.

The inspiration for the story came last Christmas when I went to stay with friends in another county, but one that I know very well and have lived in. Just like Matt in the story I was shocked and deeply saddened when a much-loved celebrity suddenly died on Christmas Day. I’d followed this artist’s work for years and, because he was a musician, the lyrics and his songs had often lifted me from sadness.

Like many others I wandered off to the house the person lived and died in, which was just a couple of miles away in the next village. I sat in my car watching the parade of people placing tributes along the wall of the house.

The core of the inspiration came from seeing a lone man approach as fog descended on the long pathway. He was tall, slender, dressed stylishly from head to foot in black, and he carried a bunch of white lilies that he placed beside other flowers. His melancholy exuded from his elegant movements. The sight struck me and I couldn’t put it out of my mind as the circumstances surrounding the  death of this musician was reported in the news for weeks.

I know a little about the deceased’s life and know sadness surrounding his love-life was often woven into his songs. I wrote the story for him … for him to have a happy ending. If that sounds weird, then that’s okay … he gave me, and still does, such pleasure through his music.

The story isn’t about a musician. It’s about life and love. There are a number of scorching hot love scenes in the story, which I enjoyed writing for the two heroes, Matt and Angel, who after hoping for love, finally find it.
Thank you to the unknown, gorgeous man who laid lilies outside the big old house. 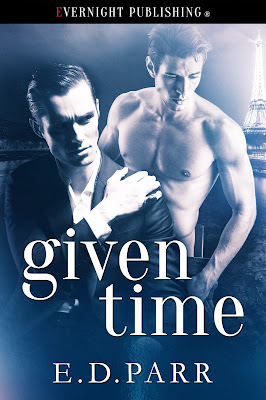 Music video maker, Angel Starc is about to board a plane to Paris when he receives some sudden sad news. It takes him hurrying back to his childhood home after two years away, estranged from his older brother, Rory.
Angel is amazed and filled with guilt when that night he meets the only man he’s found romantically attractive in a long time. How can it be right? He should only be filled with sorrow, but gorgeous, caring Matt Loewe wraps him in a blanket of comfort and love that heals Angel’s troubled soul.
Delectable, artist, Matt Loewe, follows his hunches and his heart. He’s been looking for love and Angel ignites an addictive passion in him.
As the two men fall deep in love they provide each other with the care needed to come to terms with their past anxieties.

He kissed Matt, gently, soaking up the feel of Matt’s skin against his nose. He thrust his hips so that his lower body crushed on Matt’s and the unmistakable shape of Matt’s cock, hard and bulging in his pants met Angel’s cock. A low groan escaped Angel and he deepened the kiss, clinging to Matt, as his legs weakened and his heart pounded.

Matt pushed his arms around Angel’s neck, and Angel’s hands fell away from the grip on his shoulders. Matt’s murmur penetrated Angel’s haze of pleasure. “I can’t even think straight, but I know I want you naked in my arms.” He rained kisses on Angel’s mouth.

Angel pushed his hands between their bodies. He traced Matt’s erection with his fingertips and then cupped it in his palm, pressing against the fabric of Matt’s pants.

Matt’s groan on Angel’s lips sent a shock of desire through his balls.
Angel opened Matt’s pants in a rapid move and thrust them down his thighs. He dragged Matt’s boxers down and grabbed his cock. The rock-hard column filled his fist and extended inches over it. He sighed out the pleasure the feeling gave him, kissing Matt hungrily. Angel’s cock strained against his pants and his stomach clenched so tight it made him breathless.

Angel hurried to comply. He slid his hand from Matt’s cock taking with it the pulse of pre-cum that leaked from the slit. He licked his finger gazing into Matt’s eyes.

Matt gasped as he watched. He dragged off his jacket and pulled his tie from around the collar of his shirt. Practically wrenching the buttons from his shirt, he yanked it down his arms.

Angel gazed at him, taking off his jacket and shirt as he savored the sight of Matt’s muscled torso, and the way Matt’s perfect cock bounced as he moved. Matt was already naked and Angel went to him. He grabbed his ass and pulled him close. “Fucking hell, you are so hot, and it’s been so long for me I might come just looking at you.” He kissed Matt.

Matt’s response made his cock jerk. The passion in his kiss scorched down Angel’s stomach. He escaped Matt’s lips with a groan and pulled off his pants, levering off his boots as quickly as he could.

Matt ran his hands along Angel’s ass.
Angel jerked upright and spun around.
Matt’s eyes darkened and he held out his arms.

Angel rammed his body on Matt’s and they crashed together, murmuring hoarse sounds. Matt’s cock rubbed on Angel’s and he rocked his hips so that the hard columns slid along each other. His chest felt tight as his lower body clenched with the need to come.
“I might fucking fall down if I don’t come soon.” He whispered…
Copyright E.D.Parr 2017 Evernight Publishing
BUY the book:
On release discount at Evernight Publishing and on Amazon
Find E.D.Parr
Twitter - Amazon - Evernight Publishing - Google+
Blogs: https://parrx.blogspot.co.uk/  and https://edparr.blogspot.com
G+ 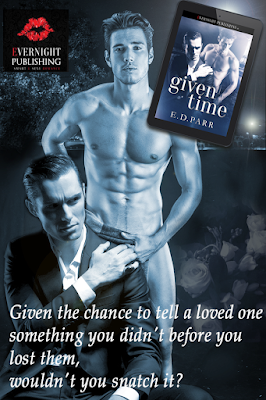