Back at the beginning of the year, Winter's Embrace was part of the Wayward Magic boxed set. Now it's available as a stand alone novel. I thought I'd share the opening scene for my tease today. You can purchase on most retail sites: Amazon, iBooks, Nook and Kobo. Find it on Goodreads too.

Fellow Teasers! I'm looking to swap newsletters for a few upcoming boxed sets. If you have a newsletter and a release you want to pimp out, include that in the comments or email me (authorangelicadawson at gmail)

Rumours were that these grey fae were Mab's children, but how one fae could bear so many baffled her. They ranged from deep, dark soot color, much like the completely black Mab, to one female who seemed pure white. The starkness of their line was so different from the riot of color in Summer. Verte had brilliant green hair with streaks of brown like branches. Her skin was the green-brown of a flush twig about to burst into full leaf. Her brothers ranged from Russo's red-brown skin and rusty hair to Aurum's brilliant yellow, rivalling Goldenrod, his sister, behind him. They were full siblings, as Verte was with Folio and Oliver. Both ignored her, focusing on their father and the Winter fae.
Rushing murmurs came from both sides as the monarchs bowed their heads to one another before returning to their armies.
“Done.” Tristan turned back toward his faeries. “I have need of volunteer from among my daughters.”
Verte looked to Goldenrod, Rose, and Violet. She was the oldest of them. Seeing fear in their eyes, she stepped forward.
“How can I be of use, Father?”
“Verte, always true,” he said, his large hand, the color and texture of centuries old bark cupping her cheek. His hair curled like moss on a stump. “I need you to be the sign of our truce. They lost a daughter to one of our sons. In exchange for peace, you will wed one of theirs.”
Her brothers clamoured and argued with him, angry at this turn of events. Her stomach twisted in a knot. Marry one of those colorless fae? Embrace Winter? Unlike humans, unions among faeries were eternal. She couldn't put him aside when she tired of him, or vice versa. Her father asked the impossible. And yet, it seemed the impossible—peace—was exactly what they needed.
Speaking loudly and clearly to be heard over her brothers, Verte said, “I can do this, but I can never be Winter.” 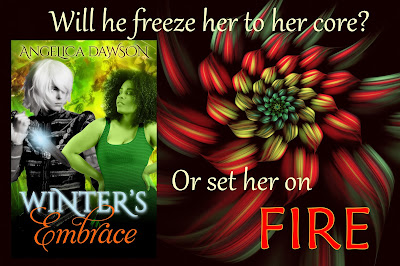 Her brothers grumbled more quietly so she had no trouble hearing her father, his voice a breeze through leaves. “No, and you need only reside there every other season, bringing your husband here on the others.”
It would be a lie to say the prospect didn't frighten her, but she was at least as strong as any Winter fae. If he could spend a season melting in Summer, she could endure a little freezing.
“When?”
“Soon. There is one more thing, Verte. I know you haven't had many lovers.” In fact, there were only two. Neither Cocoa nor Roan inspired her passion and they experimented rather than loved. “We will need to witness your union,” he finished.
That brought new arguments from her brothers, loud and heated. She wanted to yell with them, deny this possibility, claim she wasn't able to do it. But that would be a lie as well. She had modesty, but what was baring flesh next to opening it in war?
Her throat rasped when she shouted, “I will do it! I will sacrifice for the peace.”

Hop to all the other teasers!
Posted by Angelica Dawson at 00:00