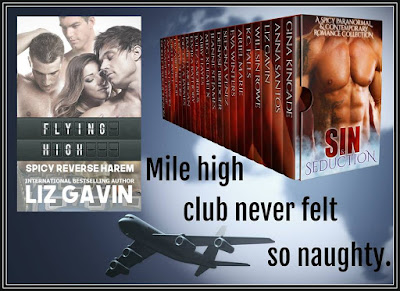 More loving with menage in this reverse harem!
Something you'll see more of if you follow Liz Gavin.

Half-an-hour after they had settled at a corner table, Kay had a confession to make. “I’ve changed my mind. You were right. This outfit is a winner,” she told Sylvia as she bottomed up her glass of red wine and returned the smile a man flashed her from across the room.
“I like that. He’s got potential.” Syl observed as she followed Kay’s gaze.
“He does,” she agreed as she watched his 6-feet and some change frame approach their table.
Her heart flipped, then hit the bottom of her stomach when he squatted beside their table, on Sylvia’s side. Fuck. She should’ve known better than to hope.
“My friends and I are hitting a club nearby. Great music and beautiful people. You’d be the perfect addition to our group,” he said without a glance Kay’s way.
She shrugged and resigned herself to hiding her disappointed sigh inside the glass of water she sipped. Sylvia had bugged her all afternoon and part of the evening to go dancing. Kay had chosen a bar instead because she didn’t think she’d be able to dance in the sky-high heels she was wearing. Her jaw dropped when she heard her friend’s reply.
“Not my style.” Sylvia wiggled her left fingers, making the wedding ring sparkle under the dim lights of the bar.
“That doesn’t mean crap if you’re at a singles bar.”
“It does to me and that’s all that matters. I’m here for the booze.” She winked at Kay.
Her friend was there to boost her confidence. Sylvia wasn’t much of a drinker, having had issues with an alcoholic mother.
Raising his hands and shrugging in defeat, the man returned to his friends. Kay noted they began a heated argument, a dark-haired man shook his head so vigorously his shoulder-length hair whipped his face every time he swept his eyes in their table’s general direction. While he seemed to quarrel with the tall blond who had just returned from their table, another member of their crew crossed the room to try to convince Syl to change her mind. Shorty returned to his friends empty-handed just like the first one.
“Maybe I should be offended they ignored me, but I’m amused.”
“Don’t mind those losers. Let’s find a treat for you.” Sylvia squinted her eyes as she scanned the bar.
“This just proves my theory. There’s little point in going the extra mile to put together this look if all I’ll get at the end of the night is a pair of sore feet.”
“I’m not done with you, missy.”
Kay spotted the tall dark-haired man from a moment ago marching towards them, a purposeful expression on his wide brow, his deep-set black eyes zeroed in on their table.
“I’d say they aren’t done with you,” she taunted Syl.
When the man got within hearing distance, Sylvia raised her hand. “Save it, pal. I’ve told your friends I’m not going clubbing with you.”
“Those guys are morons. Please don’t mistake me for them. I mean no offense, ma’am, but I’m here to talk to your friend,” he explained as he held Kay’s gaze.
“None taken. Finally, a guy around here shows he’s got brains. Grab my seat. I’m going to the restroom and might not come back for a while.” Syl winked at Kay and the newcomer, then strolled away, ignoring Kay’s glare.
He placed Syl’s chair beside Kay, then offered his hand. “Greg Ambers.”
Kay shook it and replied, “Kay Montanaro.”