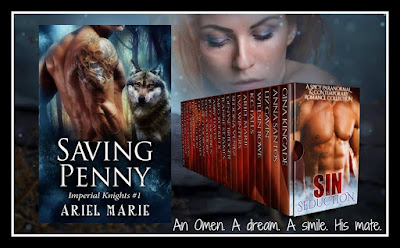 Nothing will stop the Alpha in Drake from protecting Penny.
This is the first in Ariel Marie's Imperial Knights series.

Drake’s eyes flew open as his body sprung into a sitting position on his bed. He looked around his dark bedroom and cursed.
That same damn dream.
He fell back against his plush pillows, staring at the ceiling, while breathing deep to try and catch his breath. His chest was slick with a thin film of sweat.
What the hell did it mean?
He’d had the dream for close to thirty years now, and suddenly, it was coming more frequently. It focused on him chasing after a penny, as if he was afraid of losing it. Some nights he was protecting it. Other nights, he possessed it and kept it locked away in a safe that was hidden in his home.
He was confused why his unconscious mind would be obsessed with a coin. He was worth a billion dollars, thanks to the family business that he ran with his two brothers. Business had been booming over the years, and between the three of them, they were worth a few billion dollars each.
So why a fucking penny?
Was his brain trying to tell him to save his money? Even if he went on crazy spending sprees or outlandish vacations, he would never be able to spend the fortune he had accumulated over the years. Because of the dream, he’d made sure that he and his brothers made smart investments in their business and with their money.
The sound of a phone ringing filled the air. Reaching over to his nightstand to grab his cell phone, saw his secretary, Cynthia Potts’ name flash across the glass screen.
“Cynthia, what time is it?” he growled into the phone. From the absence of light coming through the windows, he knew it was still dark outside. He wasn’t sure if it was officially the early hours of the morning or the middle of the night.
“Don’t growl at me, young man,” Cynthia’s chipper voice greeted him. “You pay me good money to deal with you. It’s time to get up. You have a ton of meetings today, and one of them is with the Secretary of State.”
He ran a hand across his face. Every night he had the dream, he always woke up feeling like shit and drained of energy. He threw his blankets off and swung his feet around to the floor.
“You still didn’t answer my question,” he stated. He knew that his secretary was tough as nails and took no shit, which was why they got along so well. Anyone who worked for him could not be a pussy. Cynthia had been with him for twenty years, and she could hang with the toughest of men. Most of the office personnel tiptoed around her for fear of her wrath.
“Don’t start with me, Drake. Just know it’s time for you to get up. Go for your run and get your ass to the office.” A click followed, signaling her disconnecting the call.
He chuckled to himself as he stood and walked over to his closet. She was the only person in the world that would be able to get away with talking to him like that. Good secretaries were hard to find, especially those who could keep secrets, such as her knowing that her boss was a fierce wolf shifter.