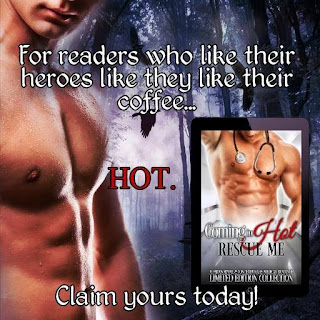 Today I'm sharing from my contribution to the second Coming In Hot boxed set.
More of the sizzling medical romance stories you love: doctors, nurses, firemen, and paramedics turn up the heat in this paranormal and contemporary medical romance collection.

Destiny stepped back from Alex, her legs shaking slightly. It had been weeks since she’d given anyone a fucking like that. Nicholas picked up the swaying submissive before she fell on her face, carrying her to a corner where he stroked her hair and whispered to her.
After wiping her brow, Destiny leaned back, stretching her arms over her head. When she straightened, a bottle of water filled her vision.

“Oh, thank you.” She took it and cracked the lid. It nearly fell from her grip when she saw who stood before her.
“Mistress D, I know you’re probably done for tonight, but…” If she hadn’t seen Dr. Edgerton here before, she might have assumed this was his younger brother. This timid and trepid man fought to find the words. “Would you want to play with me? Sometime?”
She blinked several times, no words coming. He brushed the back of her hand, lifting it to bring the bottle to her lips. With a shake of the head, she tipped it and took several long swallows. It gave her time to think.
Having witnessed her previous encounter, he probably wanted to do something similar. She would have to set him straight.
“Alex is Nicholas’ sub. I don’t have one that we could play with together. Did you have someone in mind?”
He shook his head before she finished the sentence. “No, that’s not…” He licked his lips and then went down on one knee. “Would you play with me?”
Caught off-guard a second time, she used the water to distract, nearly emptying it. “I thought you were with Charles; a top.”
He looked over to where Charles spanked a young woman. “Yeah, I thought so too, but it doesn’t seem that way. I mean, it was fun, and I learned a few things. One of them is that I don’t get off on that. Watching you, though, I think, maybe, I should be bottom.”
She hefted the bottle again, but looked at it in disgust when it couldn’t cover her any longer. Could there be anything stranger than Dr. Edgerton on his knees before her?
“Let me know what I can do to convince you. Maybe if I…” He released the last few buttons holding his shirt closed, pulling it off and dropping it at her feet. “Do I please you? Mistress?”
Bare chested, he wasn’t the doctor any longer. He offered himself to her. Really? She still couldn’t quite believe that part, but he wanted to please her. She knew what to do with that.