Be sure to visit the other Vampire Friday participants: Linda Hamonou.
Today I'm going to share a taste of the vampires at the time Jocelyn joined them. This excerpt is from Kitten. If you're ready, enter Blue Moon House: 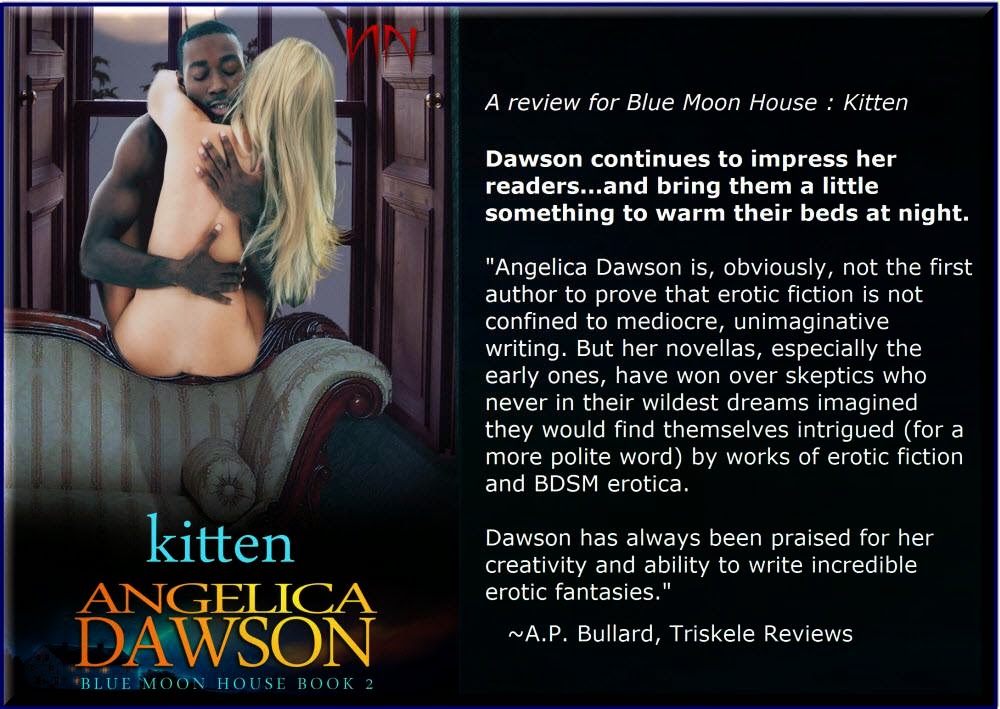 I want to understand more. Sophia said I would need to ingest you to get eyes like yours. Is it more than your eyes, though? You all seem very fast.”
The man frowned a little. “We don't normally talk about that before one has spent a few sessions with their Master. We can make special use of those willing to submit completely.
"Submit completely to what?”
The man sighed a little, tucking her into his arm over the sheets. It was late, but the house still hadn't cooled. “Easiest to show you.” He tilted her head away from him, exposing her neck. She smiled expecting a playful nip.
He bit her. She almost jumped, but resisted at the last moment. That was a blessing; she would have torn her throat on his teeth if she had moved much. She heard him swallow and her eyes went wide. Before she could do more than register the sound, the same liquid fire she had felt in her shoulder earlier in the day spread across her chest and up into her chin. It spread faster toward her belly and lower, making her moan and slip a hand between her thighs.
"Oh, God, what are you doing? That feels... it feels...” She couldn't find the words. Worse, she was becoming light-headed. She felt the little tension holding her head up release and she sank into the pillow.
"Oh, damn, too much? You taste so good.”
The words in combination with the action told her what she needed to know. He was a vampire. They were all vampires.
In the same moment she was terrified and disbelieving. There were no vampires. But he bit her, she was bleeding. Slapping a hand to her neck, she edged away.
"Please don't hurt me,” she whispered.
The man sighed heavily. “This is why we wait. You don't trust us yet. I'm not going to hurt you. Not more than you can handle, at any rate.” His lascivious smile made her feel exposed, which she was. Completely naked.
Jocelyn continued to slide from him until he rose. “I'll leave you. Feel free to dress and leave the house. You need never return. Remember, you are sworn to secrecy. We are as vulnerable as you feel right now.” His blue eyes were serious.
"You're vulnerable?” she asked. “To what? A stake to the heart?”
He rubbed his chest. “That would certainly hurt. Alone, that wouldn't kill us. We can heal from almost anything in time. No, fire is our weakness.”
She nodded. “And sunlight.”
He shook his head. “Again, it hurts, burns, but won't kill us on its own.”
Jocelyn considered for a moment. “Why are you telling me this? You are arming me to fight you.”
The vampire smiled again. There was no sign of fangs or any other difference in his teeth. “It might surprise you, but we trust you. At least, I do. You aren't asking as one who is planning an attack. You are asking as one who is curious.”
She was definitely that. “So to become...a vampire,” the idea was still ludicrous to her, “I have to eat you?”
"Drink,” he clarified. He lifted his wrist to his mouth and bit it. The wound was small and stopped bleeding quickly, but there were a few drops of pink blood on his skin. Jocelyn seized his hand to examine it.
Her companion chuckled. “Very curious. I see why Lynn likes you.”