@Phoenix_Johnson - The Wolf in the Neighborhood

I'm happy to introduce another member of the Naughty Nights Press family, Phoenix Johnson. She is here to share her new release The Wolf in the Neighborhood with us. What road lead to Naughty Nights? Did you submit to other publishers/agents?

I had known Gina since just before Naughty Nights Press was started, and when she announced she’d be putting the company together, I was quite interested. I knew she was a tough but lovely person, a good combination I believe. She’s tough enough to know the hard choices, but nice enough to treat her authors with respect, because without one, the other couldn’t succeed. It was also the support I had from others with NNP, encouraging me to keep writing, and that I had something to offer that made it a pretty easy choice. There was no other publisher.

I'm not surprised. Sounds like a great relationship (and it is!). I understand Wolf in the Neighborhood is just the first of a series. Do you know how many books you anticipate? Will they all be about the same length?

There are three altogether in Wolf Smitten, all roughly the same length. I toyed with the idea for one not part of the series directly, but the storyline I would have used ended up being able to get used in Leader of The Pack, book three. Let me tell you, I’m thankful for that because as much as I love this series, it’s also been a bit of a ride. I’m looking forward to being able to move on to my other stories as well!

Oh! I have had stories grip me while writing them. It's nice to put those ones to bed. You have a trailer for Wolf in the Neighborhood. Who made it? What was the process?

Yes, I do. I made it, actually, with the ezvid program. Free download, because right now with both myself and my partner studying, we don’t have money to pay for expensive programs (especially when I have very basic skills for that!), and I like having control of it.

Being an easy to use program, I just chose the music from their range, chopped and pasted the pictures in Paint and inserted them, shifting them to the right order and tweaking the length. It was very simple, but something I’m very happy with. I’ve had a lot of good feedback about it too, thankfully.

I made my video for Blue Moon House using Apple's free IMovie. I was surprised how simple it was. Your blog is very active with Hump Day Hook and other features. Do you ever have trouble choosing new content?

Since I haven’t been doing it for long, about half of the time I have pondered just what will I use for the hook, but for the post on the 9th, for example, it seemed obvious. With The Wolf in the Neighborhood being close to released, I decided to go with the heart-wrenching emotions from the flashback that starts Leader of The Pack. Other times, I’ll have to browse my works in progress until one pops out at me. I guess it depends on whether things are flowing easily for me on the day.

You often feature authors on your blog. How do you select them? Do you have a canned feature or do you tailor them for each author? 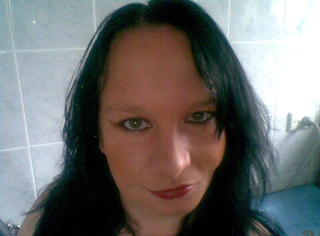 I offer a “first come first serve” basis. I have a document in the writing groups I’m part of on Facebook with all of the Mondays for the year listed. As people request dates, I’ll put them in. Last year, I also did midweek and end of week promos at special request, but I found that not many people were interested in so much promo. So this year, I’m keeping them to Mondays only. Unfortunately, being as busy as I am with writing, studying and now promoting my first release, I don’t have much time up my sleeve to spend personalising each promo spot, so I have been leaving it up to the author. Just as long as there is an excerpt and/or blurb, cover picture and buy links etc, anything extra is up to them. However, I am going to take the time one of these days in a quiet-time between assignments and write up a list of questions for authors who might want to do interviews. They’ll be able to answer whichever questions they want, as long or as short as they want, so hopefully that will help rebuild interest.

I like interviews, obviously. But I also like to make them personal. That makes it more time consuming. I'm sure the authors appreciate any and all help you can provide getting their content out there. What social media platforms have you found most helpful to you as a writer? Do you expect them to be the same that will help you reach readers? How do you expect your approach to change once your book is on shelves?

I think that Facebook and the blog have been most helpful. If it wasn’t for Facebook, after all, I never would have met the people who encouraged me to write again and stick with it, nor would I have met those behind Naughty Nights Press to feel confident about submitting to a publisher. My blog has also helped build followers, one of which I’m actually studying with now! That was quite an exciting moment for me, introducing myself on the university discussion board, mentioning my blog and to have an excited reply that she already followed my blog. That told me that I was obviously doing something right! I even remember seeing her name on a couple comments before we met through uni. It was such a wonderful experience. I imagine I’ll need to start branching out, of course, to get to new readers, but I’ll always have them as the ‘old faithfuls’ for when I need to take a little break. I’m not sure exactly how I’ll branch out just yet, but I’m sure it will come to me with time, practice and as I build experience.

I'm sure it will. Thank you for visiting my blog and letting us know a little bit more about you.
Now, to tempt you, I have an excerpt from Wolf in the Neighborhood. I'll warn you, there is a near rape here.

“You shouldn’t have left me behind in Hawaii, bitch,” he spat, as he ripped her tank top down the middle.

“You left me for the barmaid, remember? You said she had a bigger ass, that I wasn’t half the woman she was. What was I supposed to do, wait there for six months while you had your fun?” Another slap across her cheek had her biting her lip, bringing tears to her eyes. It had taken her this long to get over him, to heal her heart bruises and now here he was again, reclaiming her with his fists.

Derek’s face suddenly swam before her eyes, bringing a deep well of anger up from the pit of her stomach; this time she had something more to fight for. She balled up her fists and let them loose, landing a couple punches on his chest and jaw before he grabbed both of her wrists, wrenching them above her head.
“That’s not nice, kitten. You’re going to have to pay for that,” James growled as he forced a rough kiss on her, biting her lip hard as he pulled away. Krissy kept struggling beneath him, even while knowing he’d just wait for her to tire herself out before repossessing her body.

With one of his large hands holding her wrists painfully above her head, she felt his other meaty paw fumble with her bra, trying to slip her breasts out without undoing the clasp. When he failed at that he leaned down and bit the tender flesh; Krissy yelled out in pain and dismay as his hand had now travelled down to her shorts. He couldn’t rip them as he did her shirt since he only had one hand available to him now, so he settled for moving her shorts and panties aside to shove his fingers deep in her snatch. Another cry of pain from her only caused a look of delighted malice to cross his face; she never remembered him being this mean. She guessed that he didn’t take too kindly to being kept away from his kitten for so long.

Her eyes now closed, a few moments later she heard the zipper on his jeans slide down and felt him wriggle them down over his backside and hips. She was filled with dread as she realized what was about to happen; her mind tried to escape her body, trapped beneath the man she used to love, as her heart pounded and her hips sunk as far back in to the couch as they could. It wasn’t enough, as he used his knees to force her own apart.

Suddenly she heard a bang like a door being slammed open, thudding footsteps and a grunt from James above her as his weight was thrown off her. Krissy opened one eye in a squint, her heart leaping as she saw Derek’s form standing over her, only to feel dread again as she saw on Derek’s face the same look of malice that had crossed James’ face moments earlier. Was she wrong about this man? Had last night been a trick by another ugly soul?

Phoenix Johnson is an Australian author who has always had the passion for the written word. She had her nose in at least one book ever since she could read and would even scrutinize the back of the cereal box every morning at breakfast. It was only natural she take up writing.

Phoenix has multiple works in progress, and her favourite writing genres are the same as her reading genres; erotica, romance, paranormal, thriller and a combination of these.

Having started out reviewing, Phoenix was nominated for the 2011 Xcite Best Reviewer Award. She has also participated in her first NaNoWriMo in 2012 and successfully completed the challenge with a day to spare, despite also juggling a home life and full time study.

She currently lives on the sunny Gold Coast, Queensland, with her partner, their daughter and cat, Flash

Posted by Angelica Dawson at 15:00