This Sexy Saturday I'm giving you a sample from my contribution to Alpha Shifters After Dark. It's titled Woman's Best Friend and differs from the rest of the set in that the Alpha is neither the shifter nor the male. Judy can command the attention of any dog and that goes double for Loren who occasionally walks on four legs. 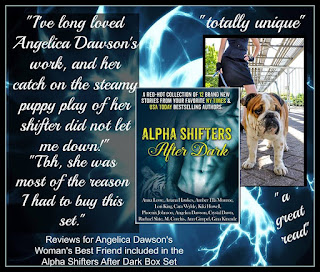 The longer she fed him, the closer he felt to the dog lurking inside him. Before the bowl was empty, his snout elongated and his ears grew and flopped.
Judy dropped the bowl in a clatter, food splattered across the floor. “Loren?” she asked, barely touching his furred face.
Loren hung in the balance. He could shift back into a man, he knew how, but did he want to do that? He was still frightened by this part of himself and longed to be reassured by Judy that he wasn’t an abomination. So rather than become a man, he gave an affirmative bark.
“That’s impossible. How did you?” She stared in shock and amazement. Loren jumped up to lick her cheek and then set about finishing his dinner. His tongue had no trouble picking up the beef now and he had the floor clean again in no time.
He sat at Judy’s feet and put one paw in her lap. After tapping that twice, he moved again and put his head in her lap. She started stroking him although she hadn’t said anything and her mouth still hung slightly open.
“Loren?” she asked again.
He barked once more, hoping she understood.