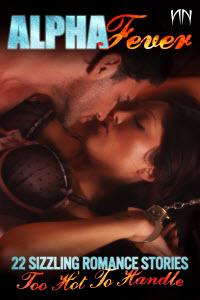 This Thursday I'm offering a taste of Switching Up, my contribution to Alpha Fever.

“Thirsty?” she asked.
“Not yet,” Rosa said. “Get on with it.”
Patty narrowed her eyes at the goad. It didn’t anger her but shifted the ideas in her head. When she spread the woman’s legs, she’d planned to start by teasing there. Rosa might enjoy that, but it wasn’t what she sought, what she craved. Patty understood and picked up the flogger. She whipped it across Rosa’s bare bottom several times, until the woman grunted at the blow.
Patty moved closer, rubbing her palm over the bright pink marks. “You’ve been bad, haven’t you, Rosa?” She spanked the woman hard and watched as her pelvis shifted and lifted. Sliding her hand lower, Patty took a page from Reggie, not quite touching the woman’s pussy. “You need to be punished,” Patty continued. She landed two swats that made her palm sting. Teasing again, she added. “You haven’t earned an orgasm, have you?” Three spanks made Patty shake out her hand.
A touch on her shoulder made Patty whirl. It was David. “Like this.” He lifted his arm and let it fall. It didn’t seem to have nearly enough force, but he knew what he was doing, so Patty copied.
“Who is that?” Rosa demanded.
“My instructor,” Patty explained. “He won’t touch you again,” she promised and David nodded his agreement. Patty let her hand fall several more times, lifting it quickly to make the slaps less continuous, but David was right, it didn’t hurt her hand and it did make Rosa groan and twitch.
“Ow,” Patty acknowledged the warning and offered her sub water.
Rose shook her head. “No. More.” Patty shrugged and took a long swallow from her bottle. Then she poured the icy water down Rosa’s back, making her arch as far as the ropes and cuffs allowed.
Patty didn’t avoid Rosa’s pussy any longer, using both hands to spread her open. She used the fingers of one to hold her open and slapped her sex with the other a few times.
Rosa’s sounds weren’t intelligible, but the gurgle was obviously her attempts to fight pleasure. Patty pinched Rosa’s clit and pulled it down. More slapping came after that.
Rosa was huffing and puffing when Patty slid two fingers into the woman’s pussy and worked them in a circle, twisting.
“Arms!” Rosa cried, her voice raspy.
Patty slid onto her knees beside the bench and pulled the rope to loosen it. Rosa could remove it if she wished, but Patty left the ropes tangled, moving to work the woman’s pussy again. She wouldn’t leave Rosa as Reggie had left her.
“Now,” she told the other woman. “Now shake that red ass and come.”

Shake your red ass over to the blog and taste some other great works!