#MidWeekTease Changes: Getting what you wish for - Available now in Prowlers & Growlers Boxed Set

Happy hump day. Yesterday, Prowlers & Growlers released! I'm so excited to see how this set does. I've shared a few excerpts from my transgender contribution, Changes, and I'll share a new one today. 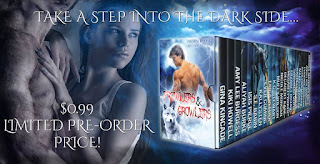 Join the dark side with ***ALL NEW*** stories from some of your favorite NY Times, USA Today, and Award Winning, Bestselling authors.
Step into the shadows with witches, werewolves, shifters, vampires, and soul mates: the sizzling hot alphas you love.
Are you fated to find your fantasy lover in these seductive, steamy pages bursting with danger and desire? Claim your book boyfriend now!


“You crazy bitch. I’m going to fuck you silly when I get out of this. I’ll shove my whole fist up your cunt.”
“Why wait?” she asked. She stood and pulled down the soaked panties. “Would you rather suck on these?” She stuffed the panties in his mouth instead to cut off his continued threats and swearing.
She shifted down and sank onto him, pushing his shirt up. Her fingernails raked over his chest, leaving beautiful red and white marks. She rode his cock while marring his tan skin. His eyes rolled back as she squeezed him and his unintelligible curses turned to moans.
Unimpressed by his pleasure, she sought his distress. She grabbed the pliers again and this time took hold of his nipple. She was careful not to grasp too tightly or to pull, but it was hard when he bucked, his hips thrusting up into her as a result.
“Fuck, yes.” She reached for the other. Before closing on it, she admired the tears leaking from his eyes, leaving tracks on his dirty face. She thrust her hips on him, hot as hell. Taking a breath to focus, she gripped the other nipple.
“Ah!” He managed to push the panties out with his tongue and his full-throated agony rang clear to Heidi’s ears, masked by cars passing by to any curious pedestrians.
“Yes, yes.” She continued riding him, the heat mounting in her. “Tell me it hurt. Tell me how a little girl made you weep.” Her clit was rubbing against his thick, coarse pubic hair. Her pussy ached and burned, and the head of his cock was pressing into her on each stroke.
Although flush with anger, tendons popping out on his neck, he was still thrusting up at her, not to shake her off, but to sink deeper. “Fuck, fuck, you, you, argh!” His belly crunched and Heidi tipped forward, bracing on his chest and wiggling her hips, coming around that throbbing cock.
“Thank you, Felix. That was perfect.” She almost purred as she put her shirt back on. Walking away, she didn’t reclaim her panties.
“Wait, you can’t leave me like this.”
She looked Felix over, his chest and abs still exposed, jeans open. She picked up a box cutter and tossed it in his direction. It fell within his reach. “Good night.” Walking out, she closed the gate behind her. As soon as she did, she felt the change coming. Fuck. She was just starting to have a good time. 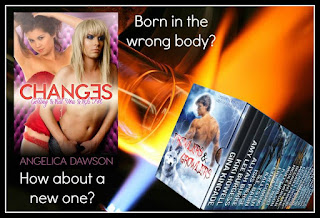 Jacqueline wrapped her arms around herself, sinking to her knees. The bra she wore slipped off her shoulders, hanging loose. She revealed more of her chest than she liked due to the shirt riding high and hanging low, which made the empty bra more obvious. The skirt was short, and for some reason, she had no panties. Her feet ached to be free of the boots that seemed to crush her toes inside them.
“You!” A man came out of the construction site and seized her by the shoulders, picking her up. She shrieked. His work shirt was unbuttoned, revealing a hairy, muscular chest and abs. He was strong, strong enough to really hurt her. It wouldn’t be the first time she’d been beaten for her gender identity, but she screamed and hoped someone would help her.
He set her on her feet right away. “You aren’t her. Where did she go? A girl with dark hair. I’m going to kill her.” He stormed away and Jacqueline shook. She looked at her hands, half-expecting them to be unfamiliar. She couldn’t remember leaving the apartment, but she had a sinking feeling she knew who the girl with dark hair was.

Posted by Angelica Dawson at 06:35