After Grigori's dragon scales are stolen, he catches a lead in Paradox City. The culprit? A sassy little thing who masquerades as him to make a sale! He might have found that adorable if she hadn't taken his dragon powers too. Intrigued by the female's abilities, Grigori set his sight on claiming what is rightfully his, and in the process, the female just might find her way to her knees.
Nova brokers deals on the black market. She doesn't ask what the products are and she usually doesn't care, not until her brother gets involved with Faceless, a mob boss. Toss in a dragon shifter searching for his stolen scales and Nova finds herself knee deep in trouble. When that sexy dragon barges his way into Nova's life, she refuses to give in to his demands… well, at least she tries to tell herself that. She doesn't expect Grigori to awaken a side of her she'd only ever thought about in the dark of night… an urge to submit she thought she could live without.

Nova sighed and hailed a cab. Crap. Close quarters in a car with—was he a Russian dragon? She wasn’t sure. But he had to be something from a manly culture. The way he’d taken over the scene, like he owned the place. Nothing phased him. But he phased her. The cab pulled up to the curb and she slid in, all the way over to the far side, as far away from him as she could possibly get.
Grigori's form barely fit inside the cab. He managed to make the seat look small and took up so much space she knew she was doomed. Nova looked out the window to avoid staring at him or would it be ogling?
"Where to?" the male driver asked. Grigori growled beside her.
"Take us to the Eclipse restaurant." She didn't look at the driver, but kept watching out the window as buildings passed. They blurred as she tried not to acknowledge the heat coming off the man beside her. She could feel his eyes on her. She wanted to look at him, but refused to allow herself. Instead, she crossed her arms over her chest. Her entire body sat rigid. If she moved, she might bump him, since he took up so much space.
The cab turned onto Fates Bridge. The sun sparkled through the glass, warming the inside of the cab. Nova didn't budge and tried not to breathe deeply. The silence lengthened between them and it was driving her mad. Why didn't he say something? What did she expect him to say? Instead of waiting for him to speak, Nova blurted, "What's the bond you were talking about?"
"Look at me when you speak to me." His accent was heavy.
Nova's heart thundered in her chest so hard she was sure he could hear it with his dragon powers. She took a deep breath, mustering the courage to turn to him. Some part of her knew those eyes would see everything, that they wanted to see everything. Technically, she already asked and didn't need to say something else, so she kept her eyes focused out the window. What if he chose not to answer? Steeling herself, Nova would just have to handle the silence. It was better than being alone in the dark.
The silence stretched out again as they moved farther into the inner parts of Paradox City. She was pretty sure Grigori hadn't stopped staring at her. She shifted her shoulders. His fingers slipped around her chin and moved her head toward him. Surprised by his gentle touch, she didn't stop him. His hard glare met her eyes and she nearly whimpered. But the sound would never escape her lips no matter what he did. Nova swallowed the anxiety—no, not anxiety but excitement. She grabbed his wrist but he didn't let her chin loose. He hadn't hurt her, wasn't causing any pain, but his grip was firm. She could feel the calluses on his hand, the hair on his arm.
"Ask me again." He demanded it of her and want seared through her body like fire.

I'm Decadent Kane and I write paranormal romance with elves, demons, shades, and recently dragons. I started my career on a dare and of course I couldn't turn the dare down, so here I am. The dare was simple: Write a story involving Santas's elves, a spy, and include the sexy heat. Who could pass this up? I took it and ran with it and my elves were born.

How long have you been a writer and how did you come to writing?
I've been writing since I was a kid, most of us have. My family are a creative bunch and mine just comes out in the written word as well as crafting. I've been writing professionally though since 2013.

How did you come up with this storyline?
Shifting Scales story line came from a writing prompt I had done several months ago. It was just 1k words- the start of the story actually- and then when I reread it it seemed like something that would fit into my Siberian paradox series that I wanted to start- so I jumped in feet first and ran with it, and dragons came out!
What are the best and the worst aspects of writing?
The best aspects of writing is when the words just flow…I start a timer and let it all go and pretty soon I have a story and characters have taken over the page. I have to reread it just to see what I wrote and I love that feeling- that inspired happiness of creation.

The worst aspect of writing- in general blurbs and titles…lol professionally I think marketing is a downside to being a professional author as it sucks up a great deal of time for the author, instead of writing.

What inspires you to write?
Many things, pictures, words, my imagination, and sometimes a character wakes me up in the middle of the night.

How did you conduct your research for Shifting Scales?
I started by looking up Siberia, as I needed a starting point for this story because it will be the prequel to the Siberian Paradox series. I went from there, and because Siberia has so much mystery around it- including it's name- it seemed like a wonderful place to create a world of my design. It has such an open ended design that other than some Russian words and cultural stuff, I have free reign.

What is 1 of your favorite quotes from Shifting Scales?
"Ask me again." He demanded it of her and want seared through her body like fire.

What do you do when you don’t write? Like in “Real Life”
I love to craft, I work with clay and create dragons, fairies, and elves.

Thanks for taking the time to get to know a little about me and my new story! I truly hope my readers, and new readers, will enjoy my Siberian dragon Grigori… 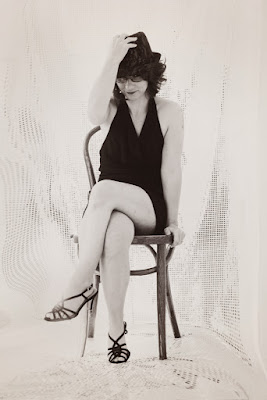 Decadent Kane is an indie paranormal romance author with a pen name taken from a burlesque name generator and began her career on a dare...

The fae, magic, and mystical worlds of possibility are carved into her soul. When she writes her stories, she pours all of her heart into what they whisper. She's the kind of lady who will stare off into space to better understand her characters thoughts, listening to them speak their own version of the story.

She's a mother of two girls and several furbabies. She's engaged but has no intention of getting married.
Like most authors she's been writing most of her life and has dreamed of being an author since the 5th grade.
When she writes, she writes to explore characters and a world first for herself. Then she revises, edits and publishes for readers.