#MidWeekTease Never Say Die - How do you explain that?

I hope you'll all excuse me teasing from Never Say Die again. It released yesterday! I can't wait to see how it does. You can find it on Amazon, Nook, Kobo or iBooks. Here's a less troubling scene from closer to the beginning. 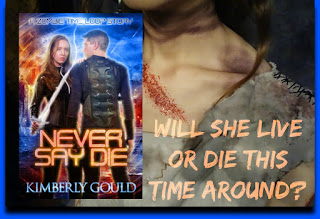 On Friday, after several days of longing for his voice, I stop outside Heph’s house on my way home from work and call him on my cell.
“Hello?”
“Heph? Is that you?”
“Which one?”
Stupid, cocky... “Jonah. I know it is, so stop being a dick.”
“Heh, sorry, just glad to have the phone back. Mom knows how to hit where it hurts.”
“Yeah, you’ve said. You know, you never told me what you were grounded for.”
“Who is this?”
Busted. “Um... Cassandra?”
There is a long pause. Too long. Come on, Heph. Talk to the girl who called you.
“I don’t know any Cassandras.”
“Yeah, I know you don’t, but I know you and really want you to come to my party.” I fiddle with my purse, opening and closing the metal clasp on the strap. Only a few days, and I’m already happy to have my pretty things back: purses, shoes, skirts. Impractical, but pretty. Old habits, like this one, playing with the clasp, come back without effort. I hope he doesn’t hear the desperation in my request.
“I don’t do parties. Also, I’m still physically grounded. I can only go out with the family.”
“For how long?”
“Who are you?”
“You wouldn’t believe me if I told you.” Suddenly this feels more natural and I lean against the trunk of the elm under his window.
The silence this time is even longer. I check that I’m still connected to the call. Yep. I can almost hear him breathing.
“Heph? It’s a girl, asking you on a date. You’re supposed to say yes.”
“Fine. Friday. I’m grounded until Friday.”
“Perfect. My party is on Saturday.”
“Will you tell me anyway? Who you are, I mean.”
“You really aren’t going to believe it.” I take a deep breath and then just blurt it out. “I’m from the future, where you and I were very close.”
This time the pause isn’t quite as long, and I swear I can hear the wheels turning in his brain. “Did we have sex?”
“God, you are such a boy. No, but we probably would have if I hadn’t died.”
“You died? You’re right, I don’t believe this.”
“It doesn’t help that I’m telling it out of order. How about if I prove that I know you? Twenty questions and all that crap. I know your mother lives across town with your sister Abby. That your Mom is actually your stepmom and is a real sadist.”
“Heh, she’s fair.”
“Yeah. Your handle online is KnightRider because that was your Dad’s favorite show growing up.”
“And what was his car named?”
“I don’t know. You didn’t tell me that. You did teach me how to blind an opponent long enough kill him, how to shoot a gun, and how to disarm a security system. I didn’t have much use for that one actually, but hey, good skill.”
“Whoa. I think I’m starting to believe you.”

A little long, but it's pretty snappy. Hop around now! Great stories and teases await!