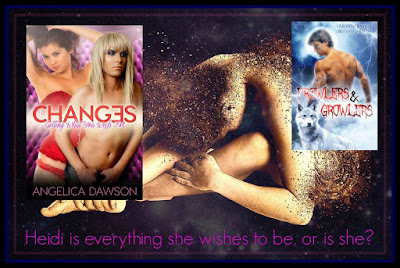 Born in the wrong body? How about a new one?

As a transgender woman, Jacqueline has never felt quite right in her body. Concocting a hormone supplement to assist in her transition, she unwittingly unleashes her hidden half: the curvy, beautiful, Heidi.
Heidi is perfectly feminine, everything Jacqueline wished she could be, except for one thing...she's pure evil.


Jacqueline will have to defeat her inner monster to have any chance at happiness.

“Fifteen.” Tears burned streaks down her cheeks. David raised his hand, then dropped it on her upturned ass. “Sixteen.”
“Enough?” He slid his palm over her bright pink bottom, making it tingle in a way that caused a twitch in her groin. Unlike most women, she sported a penis and it grew against his lap, pinned slightly. That pain added to the wonderful warmth spreading down her thighs.
“Yes.” Her voice shook even though she spoke with confidence. Sniffling, she swallowed the rest of the pain.
He wound up and landed his hardest slap yet. She screeched but wasn’t entirely surprised. “I decide when it is enough,” he reminded her. “Now, let’s see that cock.”
He pushed her up and she caught his shoulder for balance. He looked her over, starting with her knobby knees, up over the penis that had grown and continued to swell as he slid a hand down over her ass. He didn’t stop there, taking in her lacy red bra and eventually her tear-streaked cheeks.
David sat with his knees splayed, the stable base that had supported her a moment ago. His pants were soft and loose, tenting. How had she missed that before? He wore no shirt and she put a hand on one of his pecs. Her stroke was an echo of his on her ass.
She knew her makeup had run and wiped a hand across her cheek, no longer looking as feminine as before. “Sorry.”
Despite how quietly she had apologized, David’s palm went from caressing to smacking. She knew what he required, what she’d forgotten.
“I am a woman,” she intoned, reciting as she had every morning since she’d taken up with David and every time she apologized for her appearance in front of him. “I am beautiful, and my body is a temple. With it I will worship you and thank you for your adoration and admiration.”
“Damn right.” He pulled her between his thighs and sank his fingers into her long hair, using it to pull her down for a kiss. “Now get a tissue and clean yourself up.”
“Thank you.” She pressed her lips to his, but as soon as she had, she noticed her nose running and hurried to the en suite bathroom. Using astringent, depilatory cream and moisturizer, she conducted her nightly ablutions. Returning to David, she doubled her arms behind her for the clasp of her bra.
She stopped, seeing him stroking his erection. His pants were a puddle on the floor next to the chair, upon which she had laid her own. Her breath came faster and she bit her lip, wondering how he would want her.
“Come here.” He crooked a finger. “Something simple tonight? I know you’re in the lab first thing tomorrow.”
She nodded, but considered asking for the opposite. For something long, intense, and climactic.
David’s mouth twitched, rising on one side into a lop-sided smirk. “Turn, bend, and grab your ankles,” he commanded.
Jacqueline shivered. That was not the prelude to something simple. How did he read her mind like that? No matter. “Yes, sir.” She obeyed, presenting her posterior. It was still warm from his spanking.
“Can you see your cock?” he asked, moving from the bed. She could follow his voice but couldn’t see what he did.
“Yes.” Of course she could, she was bent right in front of it.
“Kiss it.”
Her whole body seemed on edge. This was not an easy request and try as she might, it remained out of reach.
“Close enough. Stay there.” Jaqueline didn’t pull her head back, but she gasped as his lubed fingers prepared her tight ass to be followed by his cock. The probing and twisting made her insides turn to water, melting away.
“Fuck, David, I’m going to fall over.”
“No, you’re not.” He had a firm hold of her hips, and despite her over 160 pounds, he lifted her almost off the floor. She wasn’t falling as long as he held her.
Trusting him, feeling safe, she tried to press back onto his cock. He didn’t let go, but nudged her head with his wrist. “I want you to cover yourself in cum.”
She shook her head, disbelieving. The blood rushing to her head made her see stars in the corners of her vision. He felt so good fucking her that she was willing to try anything. “I’m getting dizzy.”
“Keep your head there.” He thrust faster, his thighs slapping into her ass, making it sting. She squirmed, which only made it better for both of them. Her cock, bent at an odd angle, throbbed, and when David started to erupt inside her, she knew her own release wouldn’t be denied.
“David!” Ejaculate shot in pulses onto her chest and throat, dripping down to her upturned face. The twisted position added to the tension in her muscles from the climax resulted in a nasty kink in her chest. “Ow.”
“Upsie-Daisy.” David pulled her upright against him, holding her with one arm across her chest and the other her hips. He fondled her small breast while he tucked his nose in under her ear. “Steady?” he asked, kissing her neck.
“Mm,” she hummed, relaxing in his embrace.
“Lie down. I’ll clean you up.” He disappeared into the bathroom and she barely managed to open her eyes when he returned. He ran the warm cloth over her face and dabbed at her hair. She would wash it in the shower in the morning. Then he wiped her ass where his come was leaking onto the sheets. Finally, after tossing the cloth away, he slipped under the sheets beside her, spooning up.
“I love you,” Jacqueline whispered.

Hi there! Great to meet you. Don’t mind the flowers. It’s nice to have my namesake around.

How long have you been a writer and how did you come to writing?
I’ve been a published author for eight years. I loved writing fiction in school and took my first stab at a novel when I graduated. I fell away from it for a while, but fell back in just over 10 years ago, writing fanfiction. Since then I’ve published many titles.

How did you come up with this storyline?
I have an author friend, Julez Morbius, that often uses transsexuals as main characters. His writing challenged me, and after mulling over Trans ideas, Jekyll and Hyde came to mind. Thus we have Jacqueline and Heidi.

What are the best and the worst aspects of writing?
The singular nature of it fits both those bills. It makes it great, because I do it whenever I want, wherever I want and it doesn’t mess with anyone’s schedule but mine. It’s also hurdle when I don’t believe in myself or I hit a road block because I don’t have someone working with me to offer up a suggestion. I have a circle of support, and I do call on them, but it’s not the same as having someone across from you, working on the same thing at the same time, together.

What inspires you to write?
Lately, inspiration has been hard to find. Nature is one of my muses, and although it’s a dreary drab spring here in Edmonton, fresh buds on the trees remind me that everything is just about to come into bloom again.

What are 3 of your favorite quotes from Changes?
She would have another chance, another time. She just needed to be patient… She had never been patient.
***
“Let me know if you need anything. I can find another construction guy and punch his lights out.”
***
“Ah, you’re planning on parading that fucktastic body, are you?”

What would your friends say is your best quality?
I’ve been told it’s my tolerance. It comes easy to me, so I don’t think about it, but when I see a parent with a shrieking child, or a kid that seems to be always in trouble, I don’t think judgmental things about their personality or character, I start with the assumption that there are circumstances in their lives that I don’t know or understand. Instead of looking down on them, or offering platitudes, I try to offer REAL help, by giving that mom or dad a minute or two to themselves, by keeping an eye on that kid on the playground and making sure that any complaints against him are justified. And although I am tolerant and accepting of transgender individuals, I also know that my head defaults gender in a way I hate. It leads to me using incorrect pronouns instinctively and feeling terrible about it after. Although it might be my best feature, it isn’t always a good as I would like.

Are reader reviews important to you? Why?
Yes and no. Mostly no. I have very low self-esteem so a flattering review can really bolster me. However, it is the bad reviews that haunt me and make me second guess everything I write, long after I’ve forgotten the good one. As a result, I try not to look at my reviews. It’s difficult.

What do you do when you don’t write? Like in “Real Life”
I’m an environmental consultant and a lunch supervisor at my daughter’s school. In the winter, when we aren’t as busy it’s easy to squeeze in an hour for lunch, but over late spring and summer, I’m often out of town. It’s a nice change from season to season.

Thank you so much for taking the time to get to know me. It’s been lovely to share some of my hopes and fears with you. 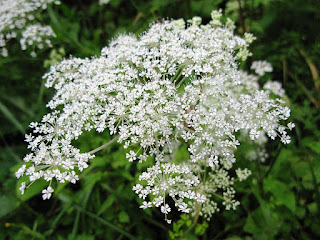 Angelica Dawson, best selling Naughty Nights Press author, has been writing for several years and having sex a lot longer than that. Angelica is a wife, mother and environmental consultant. Her love of plants and the outdoors is not diminished by the bloodsucking hoards -- mosquitoes and black flies, not vampires.