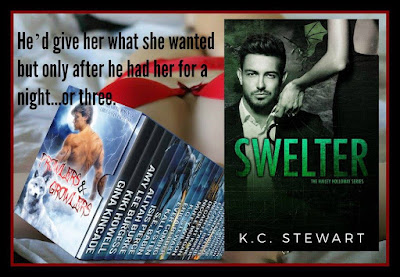 Charley had escaped Silas’s sad excuse for a prison cell with no more than a broken nail. She knew that she was going to be in some deep shit with her employer for not only disappearing for a few days but also for not killing Silas as promised. There was something infuriating and sexy about the man that made it hard for her not to go rubbing her sass in his face. With his sardonic smile and chiseled cheek bones, Silas was quickly becoming her hardest job yet.

Silas found the little red head’s antics cute. Someone wanted him dead, but that was nothing new. The dragon was one of the most hated of his kind. He couldn’t help it everyone else was too scared to take what they really wanted, no matter the consequences. So they had hired the half-breed to send him to an early grave, but something was getting in the way of her pulling the trigger. Silas knew he pissed her off just as much as he heated her up. Next time he got her alone, he was going to investigate both.

Charley wanted this job to be over. The target was a smug, arrogant dragon with a great butt. Silas had leverage over the red-headed halfling who was trying to kill him. He’d give her what she wanted but only after he had her for a night, or three.

Hiya! I am all kinds of excited for this set and can’t wait to get this interview going. *rubs hands together* So bring on the questions. Easy ones, hard ones, whatever you want to know I’d be happy to share.

How long have you been a writer and how did you come to writing?
Well, it’s been long enough that I had to pull up my KDP dashboard to see when my first book was published. March 2014 I published my first book. Last month I published my eleventh.  I got into writing when a friend of mine started to write fanfiction/role playing. That was *counts fingers* seven years ago. The friend didn’t stick but the writing did. I left the fanfiction behind and began writing flash fiction and short stories.

How did you come up with this storyline?
Well this is the standalone spinoff story of the villain turned semi-good guy from my Hailey Holloway Series. Silas needed his own HEA but he couldn’t have just anyone. She had to be tough as shit with a don’t give a fuck attitude. Charley was actually one of my characters I wrote as back in my early days. I adapted a lot of her flash fiction stories to work for Swelter.

What do you do when you don’t write? Like in “Real Life”
My “day job” is a photographer at a portrait studio. I went to school for photography and although I like it, I don’t love it. Photography is a great hobby, it’s just hard to make money in it when you don’t eat, sleep, breathe it. So a few years ago I decided that it was time for a change. I began taking classes online for Library Science. I am about a year away from getting my bachelors and plan to continue on to get my masters and be a bona fide librarian. Right around the time I started school, I was publishing my first book. I had a lot of big changes all at once, which was good. It pushed me out of my comfort zone and into the world I live in now.
I live with my boyfriend, two german shepherds and cats in a house we bought last year. He’s a police officer and works strange hours but that gives me time to do homework and write. We have been together for 5 years and I am impatiently waiting for the day he proposes. (I can say this because I know he won’t read be reading this interview.)

What are the best and the worst aspects of writing?
Best would definitely be the satisfaction of the final product. Those emails from readers telling you how much they enjoyed your book. As for the worst, I’d have to say the ever changing publishing world. Once I get the hang of something it changes. It’s a never ending cycle.

What inspires you to write?
What doesn’t? Inspiration hits at all times and from the most random of things. I once wrote an entire detailed outline in 10 minutes between appointments at work for a novel that had nothing to do with anything I was currently working on. My previous appointment had said something that just clicked with me. I still have the scribbly pages with margin notes and arrows galore waiting for the day I put it into action.

How did you conduct your research for **Swelter**?
As a librarian-in-training, I scoff at the thought of research. Getting lost in the rabbit hole of databases and Boolean phrases is just another Thursday night to me. I tend to research as I write. I’ll stop mid-sentence and run off to search a particular tree native to the area for an hour before coming back and finishing off the line.

What type of author would you categorize yourself as, a plotter (one who plots the story from beginning to end), or a pantser (one who lets the story take shape without meticulous planning)?
Oh, I’m a plotter all the way. I tried pantsing it for my first book and I hit so many road blocks it was frustrating. I work best by outlining my book, usually in one sitting and scribbled on the back of whatever paper I can find at the most inconvenient time and place because that’s how my mind rolls. I then type it up so it’s legible and tend to add a lot to it then. My outlines are pretty detailed but yet leave a lot of room to play. They also have a lot of dialog in them. Usually, I’m also in the middle of writing something else and probably have three or four other books already outlined waiting to be typed up or written.

Are reader reviews important to you? Why?
Yes and no. I love to hear what they have to say but I learned fast in my first year of being published to keep a thick skin and take reviews with a grain of salt. Not everyone is going to like your plot or writing style but those who do are loyal and wonderful and make it all worth it.

Tell us about your other books?
My other series is a wolf shifter romance. It’s about a pack of wolves trying to fight for their secrecy. There are a group of their kind called Canidae who think the wolf should rule more than the human and want to stop hiding from the world. The first book, Too Far gone, introduces the pack but follows the enforcer who had gone feral after a tragic accident. He is found by a woman who was new to town and kind of adopts this wolf who liked to hang around. In a twist of fate, she is attacked by one of these Canidae wolves and extreme measures are taken to save her life. Each story in the series has a HEA and no cliffhangers. (I HATE cliffhangers.)
I also write under the name Charlotte Casey with contemporary romance. Just released my first rockstar romance book, Chance (Rusted and Reckless).

If you could share one thing about yourself that you would like readers to know what would it be?
Uh, I don’t know. I think I shared a few things above that are good to know about me. I guess I’ll add that I am a nerd and love to talk to other nerds. In fact, I am Head Nerd of my group of friends and even have a Nerd Card, which I carry with me in my wallet.

Well, I have homework to get to. It was nice chatting with you! I am thrilled to be part of the Prowlers and Growlers set and can’t wait to read all the stories.

K.C. Stewart is the self published author of the Hailey Holloway series and most recently, the Adirondack Pack series. All her life she had fantasized and day-dreamed on a regular basis but it wasn’t until she began writing short stories that she made those fantasies a reality. She has graduated to novels but still dabbles in the occasional flash fiction and short story. Because of her love for reading and the written word, K.C. is currently continuing her education at Clarion University for Library Science. When she isn’t taking photographs, studying or writing, she is supporting a very real gummy bear habit. Currently, she lives with her boyfriend, german shepherds and cats in central Pennsylvania.