My Sexy Gentleman is Harrold, the hero of Blue Moon House: Gentleman. It is available on Amazon.

“Pardon, madam, but I'm sure I'd remember if I made your acquaintance.”
Full red lips pulled up on one corner in a smirk. “You had better believe you would.” Her lusty tone told him much. “We haven't met,” she said, circling him. “I'd been informed that you were in need of my services.”
Harrold's brow furrowed. What woman provided a service he needed? What service...? A light shone behind his eyes just as she said, “Delores was quite insistent. More than is proper. I had to set her down for that.” Lynn, for that must be who this woman was, regarded her painted nails. “She enjoyed that, I think. Would you?” She glanced at Harrold from the corner of those oddly sparkling eyes.
“Would I what?” He was completely flustered. How had a whore gotten into this party? 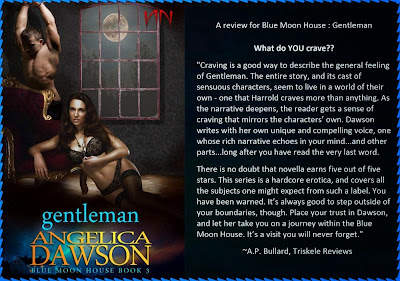 Her palm slapped across his face. It was a sensation he was familiar with. Many ladies had spurned his advances when he was younger. However, this woman had a stronger arm than any of them. This pain rivaled that of the time his cousin had punched him in the jaw for dandling his lady.
“You will pay heed when I speak. Would you enjoy being reprimanded by me?”
The suggestion alone made him burn. She was the ideal woman, strong, in complete command, not only of him, but every man at the party. Her force of presence bested that of most of the men he had met. He would love to obey her commands, especially if, as he suspected, they were anything like Delores'.

Catch all the sexy snippets!