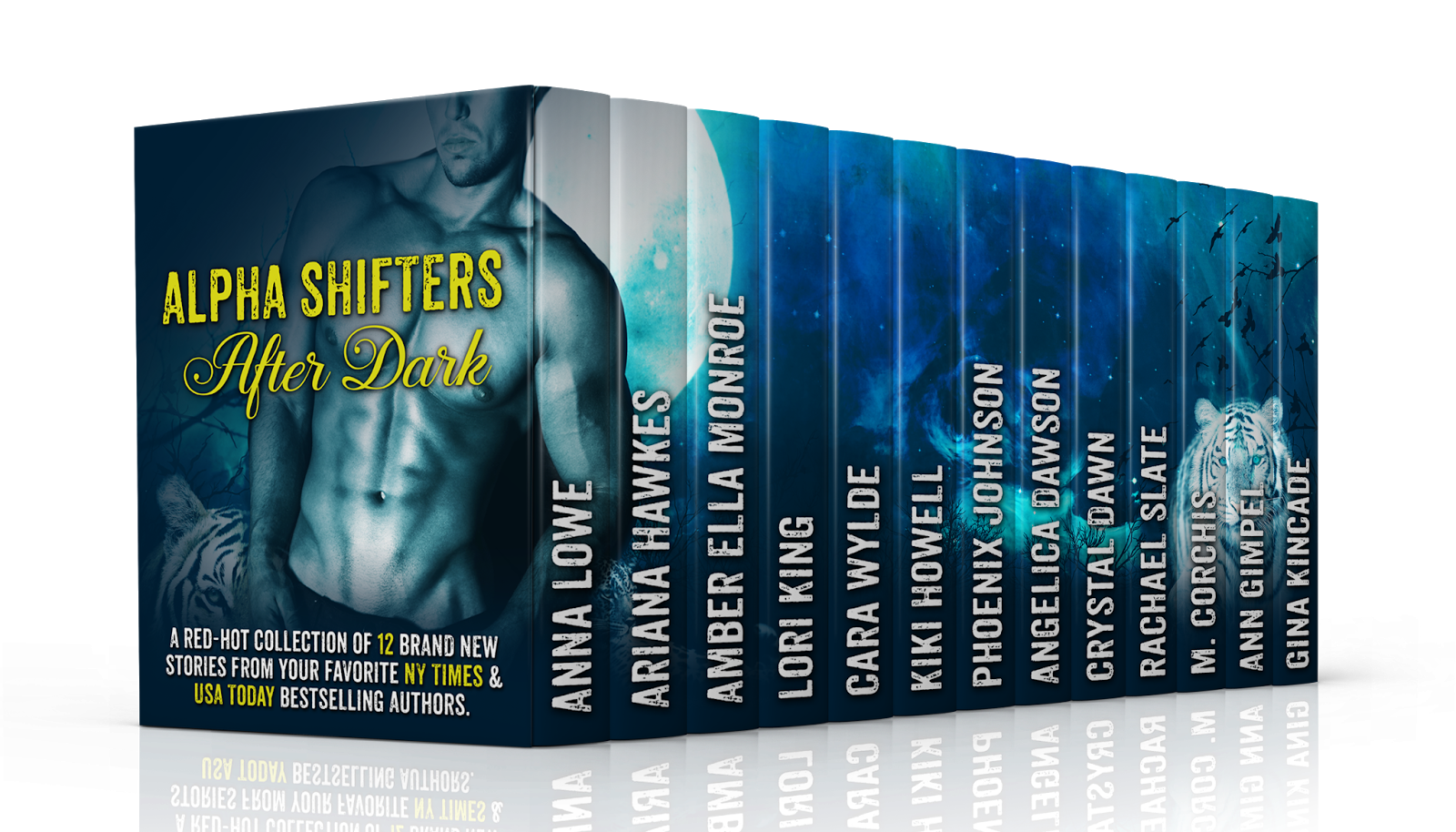 Strangers in the Night (Desert Wolf 2) by Anna Lowe
Nothing has ever scared this big, bad alpha as much as his mate’s pregnancy, especially when their quiet weekend getaway doesn't go exactly according to plan. A whimsical and sexy tale of hope, fear, and undying love, featuring wolves you'll love and a whole new shifter species that bursts onto the scene.

Carpathian Wolf (Shift Your Fate, Book 0.5) by Cara Wylde
Curvy Becca has a great career but no luck when it comes to men. A trip to Europe throws her in the arms of hot, mysterious Emil Severin. She wants him and he can't keep his hands off her, but he has a secret that forces him to hold back.

Once Bitten Twice Shy by Phoenix Johnson
Can Derek stop his canine self from hurting his ex, returned to claim him back? Who is the mysterious stranger on his way to Derek’s apartment? Will Krissy and Derek ever get to lead a normal life?

Nixed by Lori King
Annabella Raven has spent years hating Phoenix Whiteoak and his pack, while he’s spilled blood warring with hers. They’d both do anything to protect and care for their families, even if that means marrying the enemy.

The Vampire's Witch (At War in the Willows Book 1) by Kiki Howell
Amberlyn’s vampire brother, Isaac, always one to kick ass first and deal with the consequences later, kidnaps a witch, Winter. He intends to find out what type of retaliation the witch clan is planning against the vampires and werewolves.

Matching Dragons by Rachael Slate
Being teamed up with Kadence Thorne brings exiled dragon-shifter Lok dangerously close to exposure. But the treasure inside her is one that he—and every other dragon—will do anything to possess.

Rebel Howl by M. Corchis
Rebel Howl rule the record charts and all the benefits that go with being Rock Gods are in endless supply for the five-man band. Booze, sex and women are always ready and available. Lincoln Cruz is the lead singer and Alpha to his small pack. He’s crude, possessive, arrogant, demanding, cocky and sexy as hell—the Ultimate Alpha Male.

Woman's Best Friend by Angelica Dawson
Loren can't explain what it is about Judy that brings out the animal in him. When that is literal, things are bound to get hairy. Can this mature woman be his Beastmaster?

Once Bitten Twice Smitten by Ariana Hawkes
When curvy roller derby chick Aspen Richardson was a kid, two werewolf pups chased her in the forest and one of them marked her. Years later, and on the cusp of her first shift, she’s tracked down by the two alphas, both desperate to claim her as their own.

Gabrielle's Cauldron by Ann Gimpel
With sex as a lure, Gabby is drawn into a deadly game of intrigue that started over a thousand years before. The stakes are high and the timing abysmal, but she falls in love in spite of herself.

Shifter Unleashed by Amber Ella Monroe
Brock Justice is a wolf shifter and an outlaw. He and his band of brothers cultivate a plan to raid the governor’s possessions, take anything of value, and leave a ransom note. In a twist of events, Brock ends up kidnapping the governor’s daughter.